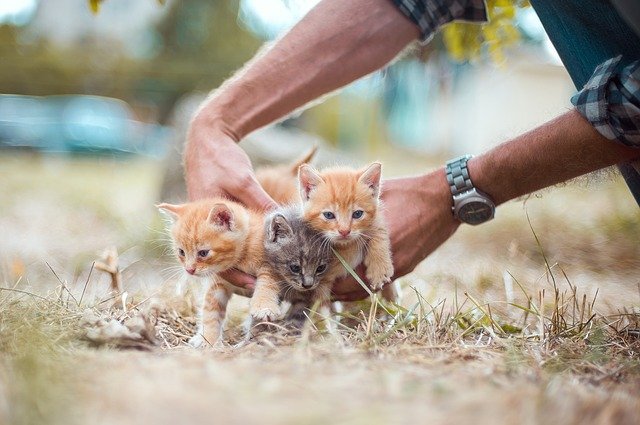 You’ve probably heard the horror of a mother cat eating her young.

As human beings, the thought of devouring your own child is simply unfathomable.

So, when you hear felines doing that and moving on as if nothing happened, you cringe.

Well, in the wild, mother cats eat their kittens. Sometimes, they eat one in the litter or several of them.

This issue can be really concerning for a pet parent of a pregnant cat or one with kittens already.

There are stories going around claim that mother cats can kill and eat their kittens if they sense human touch. This is because they can pick up on the scent and will know you were there. Is this really true?

Why Do Cats Eat Their Kittens?

Mother cats are quite mysterious and unpredictable. Some simply abandon their young after birthing them. In most cases, the queen is sick, feeling overwhelmed, and doesn’t like the kittens.

Sounds harsh but that’s the reality in the feline world.

When it comes to eating the young, cats do so as well. There are several reasons for this behavior.

When a mother feels that her security and those of her kittens is threatened, she will do all she can to protect her young.

Sometimes this means killing and eating the babies to keep them from being brutally attacked by wild animals.

Male cats, in particular, have a tendency to kill kittens or drive them away just to get intimate with their mother.

Cats also kill and eat kittens that are sick, deformed, or generally unhealthy.

Again, this practice is put in place by Mother Nature to make sure only the strong ones survive in the wild.

By eating the weak kittens, the mother adds nutrition for the rest of the litter and keeps them safe from predators as well. This goes true for stillborn and dead kittens.

Like humans, cats go through a stressful labor and delivery period. They lose a lot of energy. Breastfeeding can also be draining to the mother cat.

To replenish lost energy, the queen may decide to eat one of the kittens.

Thankfully, this is very rare among domesticated cats.

The process of birthing kittens can be overwhelming for a new mother.

It is especially true if she produces many kittens that are depending on her for their survival.

This can take a toll on the cat pushing her to eat her young to ease the confusion and stress.

Can A Cat Eat Her Young If You Touch Them?

Now that we’ve established the reasons cats eat their kittens, let’s discuss the link between that and the human touch.

If you’ve been a cat owner for a while, you must have heard vets and other pet parents insist on helping a mother cat raise her kittens from a distance.

While this is mostly overrated, there’s some truth to not touching cats.

In addition to the above factors, another reason why queens may eat their young ones is because they don’t recognize them.

See, felines rely on scent to identify their environment including their babies. As soon as the mother brings forth kittens, she will lick each one endlessly.

Besides cleaning the kitten and unblocking the air pathways, she also does that to imprint her scents on them.

If one or some of the kittens are touched by you or someone else, your scent will linger and possibly mask what was already imprinted by the mother cat. This may cause the cat to have a hard time recognizing her very own kittens.

The scent may throw the mother into confusion. She may imagine the kitten being prey rather than her own offspring.

Is It Really That Serious?

While cats may kill and eat her kittens because they smell a strange scent on them, it is not really likely in the domestic setting.

For the most part, your cat already knows your scent. Even if you touch the kittens, she will be familiar with the scent and will not feel endangered.

Often, she will just move the kittens to a new location just to be safe.

The bad news is that sometimes the kitty may kill one of the kittens as she tries to hide her under the sofa, cabinet, or something.

Only in very rare circumstances will a domestic cat kill her young because of human touch.

You may want to restrain yourself only for the first week or so. After that, you can help out whenever.

Just keep strangers from touching the kittens. For one, the unfamiliar scent may confuse your kitty. Secondly, newborn kittens have a very weak immune system. They catch parasites, infections, and diseases fast.

Lastly, plenty of human touch risks the wellbeing of the kittens. Some people don’t know how to handle kittens and may cause physical trauma as they carry them around.

Raising newborn kittens is no mean feat. You have the kitten’s best interest at heart all the time but sometimes you do more harm than good.

Touching kittens increases the likelihood of the cat eating them.

However, it is not a huge problem among domestic kitties. Just be careful during the first week or two and you will be okay.

What Should You Do With A Dead Kitten?

Cat Depression After New Kitten: Does It Exist? (Plus How to Deal with It)

Do Kittens Miss their Siblings?

Mother Cat Sitting on Kittens: What Does It Mean? (Plus What To Do)