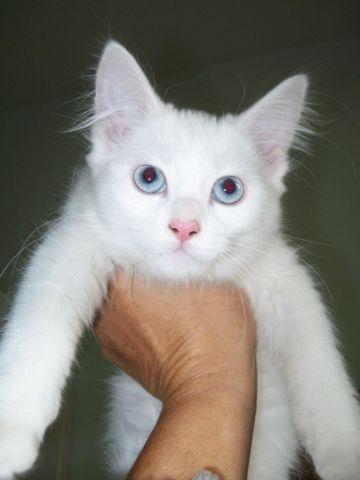 Known for their sleek and unique looks, Siamese cats are among the most beloved pets in the world.

They easily stand out in a crowd with their cute straight black ears, short graceful coats, bright eyes, and muscular physiques.

Although they have their origins in Thailand, these kitties are now famous in the west and have been for the last two centuries.

Besides their killer looks, they have some of the best qualities as pets as well.

Like many breeds of cats, Siamese cats come in a wide range of coat colorings and patterns.

Most have silver-gray coats with blue eyes while others come in brown, orange, blue, and brown coats.

One of the rarest variations is an albino Siamese. There’s very little known about this special kitty with many mistaking it for a typical white cat.

Well, we are here to debunk the myths and set the record straight on Siamese albinism.

We will tell you about the coloration (or lack thereof), facts about Siamese albinos, traits, price, and other important details.

In a broad sense, albinism is a genetic disorder characterized by minimal or no melanin production.

Melanin is a pigment responsible for the coloration of the skin, eyes, and hair.

For the feline body to produce melanin, it must have a tyrosinase enzyme. A gene called TYR determines whether tyrosinase is present or not.

A kitten born with either a damaged or absent TYR gene is essentially an albino.

This defective gene is recessive which means that both mother and father must pass on the gene to the offspring.

An albino cat is predominantly white with pinkish-blue eyes.

Traits of the Siamese Albinos

While albinism is simply the absence of melanin, the phenomenon presents itself a little differently in Siamese cats and other similar cat breeds.

Ideally, albino cats are stark white save for the eyes which are blue or pink.

Albino Siamese cats, on the other hand, still have colored extremities. This is because of a modifier gene, known as a Siamese allele that alters the gene responsible for color.

So in essence, an albino Siamese cat is a white kitty with light blue pinkish eyes. The pupils of the eyes are colorless because of the absence of pigmentation.

If you look close enough, the blood vessels are visible through the eyes. Some of the cats with this condition have poor vision. The lack of melanin triggers challenges with tracking, depth perception, and focus of the eyes.

Besides the pale coat and pink blue eyes, an albino cat pretty much looks like any other Siamese cat.

It would be impossible to talk about albino Siamese cats without mentioning the effect of temperature on their coloration.

The Siamese allele is pretty interesting as it is temperature-sensitive. What this means is that when a cat is exposed to extreme cold or heat, her paws, nose, and ears tend to change color.

The gene modifier sends out a signal to stop the production of melanin at a certain temperature.

In lower temperatures, the mutation is blocked and the color gene can give the cat darker colors in her extremities.

The ears, tail, face, and paws are the coldest parts of a cat’s body and are where color kicks in.

In warm or hot conditions, the color gene is for the most part blocked. This is the reason albino Siamese cats are born white.

The womb is warm and doesn’t allow much permeation of temperature on any part of the body.

However, as the kitty is exposed to cold, color develops on the paws, ears, and nose.

Besides exposure to hot and cold environments, putting a bandage over a cat’s fur can also alter her color.

There’s no denying the fact that albino Siamese cats are rare.

Albino cats, in general, total about 2% of the entire feline world population. This means that Siamese albinos are much fewer than this figure.

Most people live their entire lives without coming across one. If you are interested in this specific coloration, you’d have to look far and wide.

There are probably just less than 100 such kitties in the United States alone.

Since caring for them is no mean feat, you may want to work with reputable breeders only. This limits your options even further.

Most cat owners mistake white cats for albinos. It is understandable since both varieties have white bodies.

However, a cat with a natural white body will have healthy eyes of different colors including blue, green, orange, black, and double coloring.

However, albino Siamese kitties have distinct pale blue eyes that have pinkish and reddish hues.

The eyes are almost transparent and appear pink because the blood vessels in them can be seen.

The irises typically lack pigmentation unlike the irises of the classic white cats.

The albinism gene affects the cat between this temperature range. Anything above or below this and the cat’s paws, tails, face, and nose change color.

4. Siamese Albinos are not the healthiest cats

Albinism is known to affect the health of a cat in many ways.

For one, it triggers sunburns if the pet is exposed to direct sunlight for long periods of time.

Since the skin is lighter than most, the harsh sun’s rays penetrate and damage tissues easily.

Such a cat also has extremely sensitive eyes that can go blind at an early age.

Anything that is rare pushes its demand upwards and supply downwards. Ultimately, its price goes above the roof.

This is true for Siamese albino cats. If you are hoping to buy one, prepare to splash thousands of dollars on a quality kitten.

Another reason albino cats are expensive is that they are expensive to raise. Right from the beginning, they require special attention – quality diets, care for their delicate skins, vaccinations, medical checkups, and more.

Breeders spend a ton on them until they can be sold.

All the costs are typically transferred to the buyers. You’d be lucky to get one from your local shelter but even then, plan to spend a pretty coin.

The purchasing price of a Siamese albino is only half the battle. More money goes to the care and maintenance of this cute kitty.

It is difficult to put an actual price of a Siamese albino cat because it is rare and breeders don’t set out to breed them in the first place.

The birthing of an albino kitten is pretty much an issue of chance. A typical Siamese cat costs anywhere from $500 and $1000.

Expect an albino kind to be even more pricy for the reasons given above.

An albino Siamese is a rare, striking, and enigmatic feline.

Whether you are looking for a cat that changes color based on her environment or one that turns heads, this is one choice you will love.

Just determine whether you can handle her buying price and sky-high caring needs.

If you decide it’s a go, let nothing stop you from enjoying the good of owning this sweet kitty.