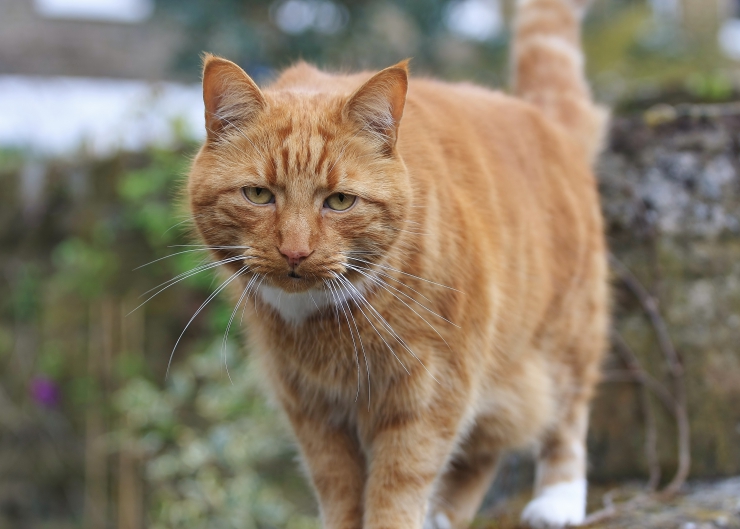 Statistics by Statista show that over 33% of domestic cats are obese while almost 26% of them are overweight.

This means that less than 40% of kitties in homes have ideal body weights.

The thing with obesity is that it can be hard to differentiate from primordial pouches.

You have probably noticed your cat’s stomach hanging low. It looks like a loose-hanging belly.

The first thing that comes to your mind is to take your kitty for long walks every day.

Your fur baby has a primordial pouch—a perfectly normal occurrence in some cats. This refers to flabby skin at the abdomen that moves from side to side as the kitty walks.

Some believe that the extra piece of skin helps protect the cat’s vital organs during fights.

Another theory states that the pouch is where the kitty can store excess fats for rainy days. Lastly, cats are also said to use their pooches for increased flexibility.

Whichever theory you believe, the truth is that some cat breeds are predisposed to having primordial pooches than others. We have listed 7 of them below.

With a black-spotted coat of fur and gooseberry dazzling green eyes, the Egyptian Mau looks like a feline fashionista.

She is also known for his cheetah-like gait as well as her fat belly aka primordial pouch.

A large majority of male Egyptian Maus carry their pouches with pride. The extra skin gives them flexibility when twisting and jumping.

During a fast run, the skin extends the length of the leg giving them greater agility.

This breed is not only beautiful but gracious and sweet as well. He may not always be up for petting and being carried but he sure enjoys human company.

If he loves you, he will follow you around the house. His melodic voice, speed, and playful character will always melt your heart.

Pixie Bobs are famous for their muscular builds, short tails, and extra toes.

Not only are they large in size but their rich tawny color with black stripes make them uniquely stunning.

That’s not all; these cats are incredibly intelligent. They don’t meow as much as they chirp and chatter.

The cats are also some of the most affectionate and love hanging out with people.

Primordial pouches are common with Pixie Bobs. It is actually a requirement by breed standard to have the pouch.

The Japanese Bobtail is also another cat with a short tail.

As a matter of fact, the breed has the shortest tail in the feline world.

The fur around it stands making him appear to have a bunny tail.

The Longhair variety causes the short tail to spiral in a gorgeous way.

A Bobtail also has soft and silky hair that feels good to touch.

In Ancient Japan, the breed was pampered like royalty as she was believed to carry good luck.

With high intelligence, a sweet temperament, and a loving personality, it is easy to see why.

Not all Japanese Bobtails have extra skins on their bellies but a majority of them do.

When you cross the Asian Leopard cat and a domestic cat you get a beautiful spotted or marbled kitty by the name of Bengal.

The breed looks exotic and wild except he is small and sweet, unlike his bigger and wilder cousins.

With a few feral tendencies, this kitty loves to explore the outdoors more than staying indoors.

He enjoys vast spaces with towering trees from where he can look around and hunt birds.

The Bengal is among the cat breeds with hanging skin between their belly and rear legs.

The British shorthair is a round, stocky, and cute kitty.

Most owners with the breed assume that their babies are chunky in nature when it’s really the pouch that exacerbates the fatty look.

For these cats, the hanging belly, big round eyes, dense coats, and big bodies make them look like stunning giants.

They are not necessarily fat but have plush dense coats that give them the stocky look.

Like his Japanese counterpart, the American Bobtail is also one with a primordial pouch.

The breed is already medium-large in size. A Bobtail with such a pouch is even bigger than others.

The skin can sag down to the ground or be a little flappy.

Whichever the case, the breed sometimes needs the fat belly during the run. It elongates his legs so he can a longer leap and jump higher to reach out to prey.

The cat is quite athletic and loves being out running. When fighting, the pouch comes in handy for protection.

Last on the list, we have this striking old Breed from Persia (present-day Iran).

One look and you will conclude that this beauty is grumpy.

His mouth is designed in a way that gives him the look of a permanently angry pet.

Well, when you get close with this breed, you will soon realize that he is happy and fun.

He just has a flat boring face much like that of a brachycephalic dog like a pug or bulldog.

In reality, Persians are affectionate little energy bunnies. A large majority of them have primordial pouches used for different reasons.

The former category has a bigger advantage over the latter.

Granted, they look heavy and chubby but at the end of the day, the pouches serve a huge purpose.