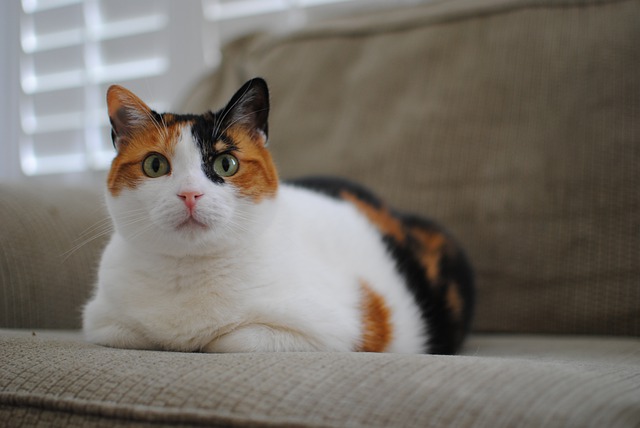 With a rich white, orange, and black coat, the Calico cat is a beauty to behold.

When she walks into a room, heads must turn to admire her beauty and elegance. Her eyes shine bright revealing mystery and secrecy.

Speaking of mystery, there’s a lot that people don’t know about their Calico kitties.

Not only are they cute and charming but many believe that they tap into the spirit world.

These tri-colored cats are not your average felines—at least to a ton of people across the world.

If you are interested in this side of Calico cats, here are 6 symbolism facts you probably didn’t know.

1. Calicos Have Supernatural Powers In Japan

Ever seen the “Beckoning Cat” by the name of Maneki Neko in Japanese culture?

He is a common figurine in people’s home entryways, shops, and restaurants.

Well, this feline beauty is a Calico. The reason many have it is that the kitty is believed to be a fortune cat in this Asian country.

Calicos were revered for their supernatural abilities back in the day in Japan.

Fishermen and sailors as far back as the 19th century would bring them along to protect them against harsh storms and other dreadful outcomes in the waters.

The fishermen also believed that their cats protected them from being attacked by jealous ancestors.

Whether it worked or not, the fact of the matter is that Calicos are held in high esteem in Japan.

2. They are called ‘Money cats” in the United States

If you thought that this eye candy of a cat is only famous in Japan, you are mistaken.

The United States also loves him and refers to him as the ‘money cat’.

Well, to be honest, this name came up because of the rarity of male Calico cats.

They are so few that many have jumped to the conclusion that they are worth a pretty penny.

As it turns out, males are sterile making them meaningless to breeders. Still, this cat is special in America.

Ireland also makes it to the list of countries that consider the Calico cat as more than a cat.

If you developed warts in ancient days, you would rub a Calico’s tale on the affected area and you’d be healed.

What makes this fact even more amazing is that the Irish people believed that healing would only happen in May.

If you got warts outside this window, you’d have to wait until May to give it a shot.

From Asia to Europe to the west, people across the continent are convinced that the Calico cat carries charm wherever he goes.

When he is adopted into a home, he will cause good success and prosperity to the owners.

Whether they are in business, career, or anything in between, they would have many opportunities for success.

This belief is still at large in today’s world in many regions around the world.

While both female and male calicos are special, the former is believed to be even more powerful. This is mainly because of his rarity. For every 3000 female calicos, you have only 1 male.

If you come across one, you are truly lucky and fortune and abundance is yet to visit you.

A calico cat is mostly white but also has black and orange patches.

According to some cultures, white symbolizes virginity, orange for family, and black for magical energy and power.

Such a kitty is believed to bring pure joy, protection of one’s home, and give fortune everywhere she goes.

6. They can look into the future

Last not least, the Calico is also symbolic of a seer.

When she looks at you with her bright eyes, she can see past you and give a picture of who you are.

Not only can this kitty see you for who you are but she can also perceive well into the future.

Some people fight to own this sweet color just so they can know more about what awaits them.

Others take advantage of this to know more strangers that walk through their doors.

Does a Calico cat inspire curiosity from you?

If yes, perhaps there’s it’s true that she is incredibly spiritual.

Many of the said symbolism facts are less proven but some people swear by them.

Whether you believe them or not, the truth of the matter is that this tri-colored feline is unique in many ways.