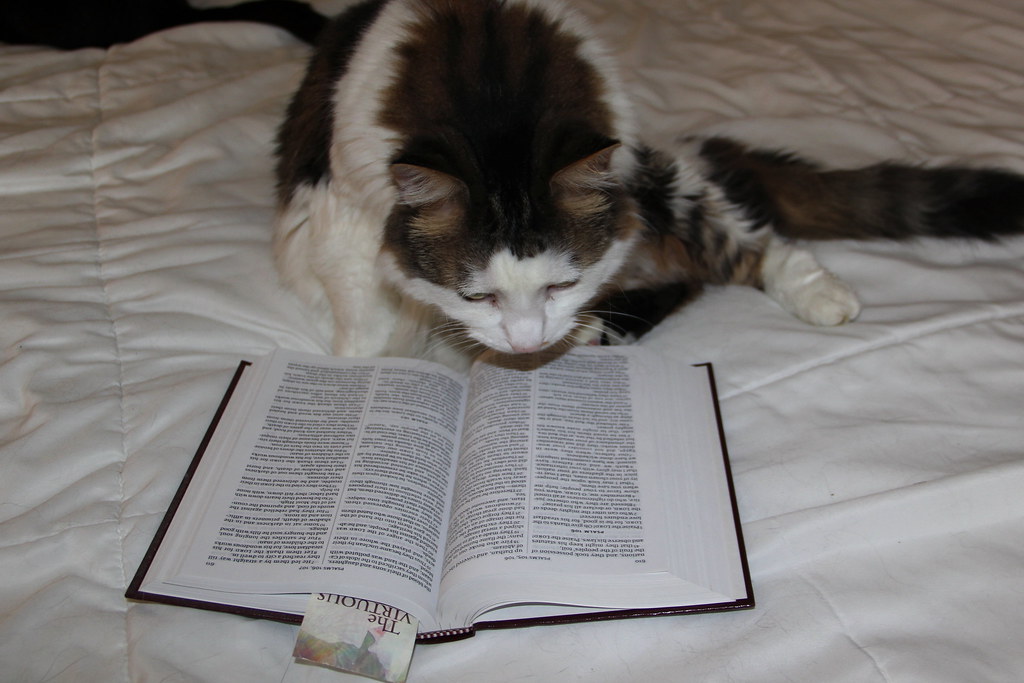 Of all the pets we love, one of the most adorable is the cat. Since the start of human civilization, cats have been human companions.

From the African feral cat to the domesticated house cat, the amazing history and journey of the cat touch almost all corners of the globe.

So, one feels tempted to conclude that the bible, which documents the rich culture of the Jews should mention it.

While it’s an irresistible feeling, let’s dig deeper in the hunt for answers.

It may shock you to know that this cute cuddly animal does not make it in the Christian bible.

The only cats mentioned are the big cats or wild (feral) types such as the leopard, lion, and wildcats.

For example, the lion makes an appearance 145 times due to its special role as a symbol of strength, courage, and fighting agility.

In fact, the central figure of the bible, Jesus Christ, holds the exalted title, Lion of Judah, which signifies courage, dignity, and kingship.

Some very indirect mentions of cats do appear in some biblical books. For example, the Letter of Jeremiah 1:22 says: “Upon their bodies, and heads sit bats, swallows, and birds and cats also.”

However, the book is found in the Catholic bible and is not universally accepted since it is absent from the Protestant bible.

Also in Psalms 73:7, the cat is mentioned in passing through the words: “Their eye bulges from fatness. The imaginations of their heart run riot.”

There is convincing evidence that cats existed in the times of biblical Israel.

To start with, neighboring nations like Egypt have left vast evidence of house cats. These include mummified cats and also papyrus, statues, and paintings featuring cats.

The cat was not only highly revered among the Egyptians but worshiped. Egyptian law made the killing of cats a capital offense.

Knowing this, the enemies of Egypt cunningly took advantage during battle. For example, in 525 BCE king Cambyses of Persia intentionally carried cats to battle against the Egyptians who were led by Pharoah Psametik III.

Horrified at the thought of the cats getting killed, the Egyptians lost nerve and were defeated in battle.

All our modern domestic cats are also believed to have descended from cats that were originally from the Middle East. This comes from recent DNA studies.

Cat remains dating from the Neolithic times have also been excavated from Jericho, an ancient Israeli town. This is dated to about 7,000 BCE which is before the biblical Israel.

Other advanced civilizations of the time like the Babylonians and Assyrians also kept cats as pets.

Riddle to the Missing Cats: Why Cats Make No Appearance

Given the prevalence of domestic cats in biblical times, why does the bible omit their mention?

Historians think that perhaps this omission was due to the Jewish revulsion for Egyptian paganism. Being monotheistic, the Jewish worshipped only one God.

This could be why anything with paws was considered ritually unclean as Leviticus 11:27 states:

“Also whatever walks on its paws, among all the creatures that walk on all fours, are unclean to you; whoever touches their carcasses becomes unclean until evening.”

Interestingly while cats hardly make an appearance in the bible, their arch enemy and prey, the mouse does.

However, the rodents are mentioned in a negative light due to their infamy of destroying food and causing illness.

Despite the Omission, Cats Hold a High Place

Cats may have missed the boat in not being mentioned in the bible but they can strut with some pride because the bible has a good word for all animals implying that they will also have a place in paradise.

“The wolf also shall dwell with the lamb, and the leopard shall lie down with the kid; and the calf and the young lion and the fatling together, and a little child shall lead them. 7 And the cow and the bear shall feed; their young ones shall lie down together: and the lion shall eat straw like the ox. “

Cats in the Talmud

The Talmud is a very important guide of the Jewish faith, second only to the Bible (Old Testament or the Torah).

From it, we can learn more about cats in early Jewish culture since it was developed at about the time of Jesus and shortly afterward.

Here the cat is mentioned but to the dismay of Christian cat lovers, it is a mixed bag. Cats are praised for their modesty but they are also criticized for their poor memory.

In Tractate Horiot we read the following about the cat’s poor memory due to its act of eating mice:

“The disciples of Rabbi Elazar ben Zadok asked: Why does the dog know his master, and the cat does not? And his answer was:  It is certain that he who eats from what is left by a mouse is apt to have a poor memory, so much the more so the cat that himself consumes the mouse.”

Regarding the cat’s modesty, the Gemarah (rabbinic teachings) in Eruvin 100b says that the Torah helps us to learn about various animal behaviors, such as modesty from the cat.

For such a detailed book that mentions over 120 different animals, it’s unusual that the bible omits domesticated cats.

But not to worry as the cat is generously represented by its distant cousin, the lion.

What’s more, you may be pleased to know that all animals (including our feline friends) are candidates for paradise.