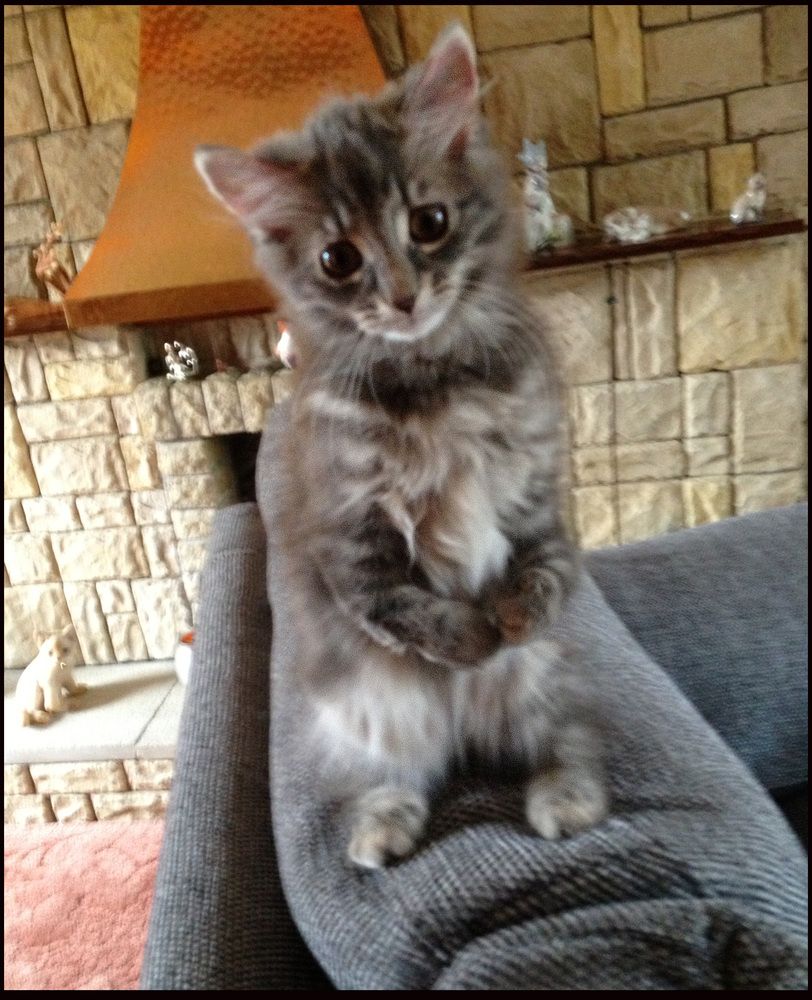 Ever come across a cat whose front limbs are shorter than his hind limbs (almost like a kangaroo)? Well, that’s what a squitten cat looks like.

There are all manner of stories about how these breeds came to be including the possibility of a cat mating with a squirrel to form the squitten (hence the name).

In this article, we will delve into the nitty-gritty of this breed to understand how it came to be and everything about it.

What’s The Origin Of Squitten Cats?

The most widespread explanation for squittens is that they are a crossbreed between a squirrel and a cat.

And this might make sense considering the striking resemblance between squirrels and this cat, especially when standing on toes.

The first documented evidence of a squitten dates back to the 17th century when a German Physicist published a paper in which he described how a domestic cat had given birth to a squirrel.

In the paper, he postulated that the cat had mated a squirrel. This publication is perhaps the reason why these cats were christened squittens (half squirrel, half kitten).

This finding has been the subject of debate for a while but it has now emerged through genetic studies that it is, in fact, impossible for cats and squirrels to mate. This is because the two animals are too dissimilar genetically to mate and give birth to offspring.

So, how did this fabled squitten come about?

Well, there are a couple of theories. One theory is that the squitten was created deliberately through selective breeding. This means humans artificially selected certain traits in cats and bred them together to get desired characteristics.

Someone might have wanted a cat with a squirrel-like tail and bred cats to achieve this look.

But the most probable explanation is that the squitten is actually a genetic mutation. A mutation is a change in the DNA sequence of an organism that can lead to new or altered characteristics.

In the case of the squitten, it is believed that a mutation caused this cat’s tail to grow longer and resemble that of a squirrel.

The mutation might be attributed to a genetic deformity that results in the absence or partial formation of the radius bone.  This bone is one of the bones in the forelegs of cats.

The radius bone helps to give structure to a cat’s tail, which is why squittens often have long and curly tails that resemble squirrel tails.

Whatever the origin of the squitten may be, one thing is certain: these fascinating cats are quickly becoming popular pets.

Due to their unique appearance, they have captured the hearts of cat lovers everywhere.

Should You Get A Squitten Cat?

It is tempting to choose a squitten because of their cute looks and friendly nature.

However, it is important to remember that these cats require special care and attention, especially since they have shorter legs that can lead to mobility issues.

You may also want to consider whether you will be able to handle the grooming and care requirements of this unique cat breed.

Squitten cats require a well-ventilated living space and a diet that is rich in fat and protein. This is because their shorter legs can cause them to have difficulty moving around and they require extra nutrition to maintain their energy levels.

In terms of grooming, squitten cats need to be brushed daily to prevent their fur from matting. They also need to be bathed regularly to keep their coat clean and healthy.

The health of squitten cats is generally good, but they are susceptible to certain health conditions such as respiratory problems and joint issues.

Their shortened legs also make them more susceptible to joint injuries and arthritis, so be sure to give your squitten plenty of space and toys to play with.

Additionally, as is the case with any genetically mutated animal, squittens are sensitive to certain medications and may require special care when it comes to their health.

Make sure to consult with your vet before administering any medication.

Overall, squitten cats are a unique and special addition to any family. Their playful and outgoing nature will add lots of cheer and fun.

However, you do need to take extra care to keep them healthy and avoid injury.

So, if you are willing to make the commitment required to properly care for this adorable kitty breed, then a squitten may be a great addition to your family.

Can Cats Survive with 2 Legs?