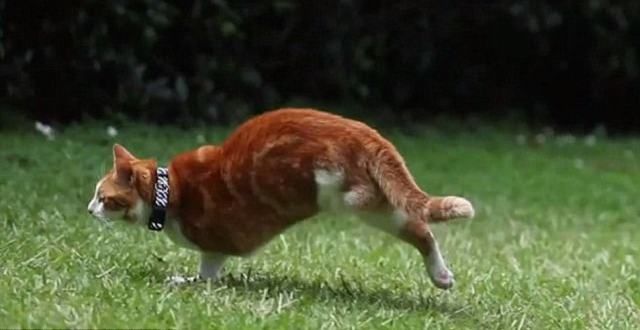 Cats are hardcore beings. If you’ve ever worked in a cat animal rescue organization, you can attest to this. No matter how bad they are abused and neglected, felines can make a 180-degree turn with good care. Because cats never really forget the past, their ability to pick up the pieces and move on is astounding. A kitty can survive and live a happy, long, and fulfilling life after traumatic incidence including car accidents, chemical burns, fires, you name it. But can they survive on two feet? We investigate…

What Are The Functions Of Feline Legs?

A cat uses her hind legs to make backward and forward movements. The rear legs have powerful muscles that push the cat forward towards prey. The muscles also help the cat to have an additional force when running and spring as well as straightening the spinal column.

On the other hand, the front legs can move backward and forward as well as rotating to turn the paws towards the face. The knee makes it possible for the cat to bounce and spring while the limbs connect with the clavicle and prevent the cat from hurting herself when she jumps. They are very flexible and carry most of the cat’s weight propelled from the back.

A cat with two legs can get by just fine but he will have limited function obviously. From the information above, every feline leg serves a purpose when it comes to the cat’s agility, locomotion, strength, speed, and flexibility. For instance, a cat without front limbs has a hard time rotating his body. Without the legs, it means his weight rests on his hind limbs. As a result, the rear legs can easily get tired.

On the other hand, a cat that doesn’t have hind limbs will find springing, bouncing, and jumping quite difficult. Moving at top speeds also becomes hard because the propelling motion from the hind legs is absent.  A cat with 2 legs on the side has a little of both worlds since she has one front and one hind limb. However, for optimal function, both limbs should work hand in hand. Without one front limb and one hind leg, the cat’s agility is greatly compromised.

What Do Studies Say?

A survey was done by a vet by the name of Lyn Foster in conjunction with the International Cat Care to determine the quality of life of a cat after amputations. Out of the 230 cats that participated in the study, 2/3rd were male. This only means that male cats roam around more getting into accidents. Young cats under four years old were the same number as male cats for the same reason.

That’s not the most interesting finding of the study. When asked if amputating their legs caused any problems for their cats, most pet parents said no. That they didn’t see much change except that their fur babies now moved slowly and were less active than before. The kitties also got tired faster for obvious reasons but everything else remained constant.

A cat with two legs can go on with life very well. She just won’t match her counterparts with four legs but best believe, she won’t sit on the couch feeling sorry for herself.

Able is a rescue kitty from Thailand with only two limbs. WalaiSriboonvorakul, Able’s keeper, had a strong desire to take care of Able after being electrocuted and losing his tail and two front limbs. The cat nearly died from the ordeal but thanks to Walai, he underwent treatment and is now as happy and healthy as other cats. He can do everything other cats do including climbing the stairs, leaping, and chasing other cats. You can check out Able’s Facebook and Instagram accounts to see him in action.

Unlike Able who lost his fore limbs, Anakin doesn’t have both hind legs. Artist, Carrie Hawks, who adopted the adorable cat named him Anakin after Darth Vader’s character who was missing certain limbs as well. Now, the kitty has learnt how to balance his front limbs and enjoys life like other cats with all four limbs. Hawks even started a YouTube channel to document Anakin’s daily life.

Caffrey’s case is different than both cats above. The delightful long-haired kitty has legs on his right side only. If you think that walking, jumping, and climbing with two right legs is hard, you should watch Caffrey in action. We bet it will change your view altogether. Caffrey was knocked by a car that left him with three limbs. However, he later developed a tumor in his front limb which had to be amputated. You can get the scoop on this article by Daily Mail.

A cat with 2 legs can do more than survive. She can thrive if accorded the right care and love. The only problem is that her agility, strength, and speed will not compare with those of a cat with all four legs.