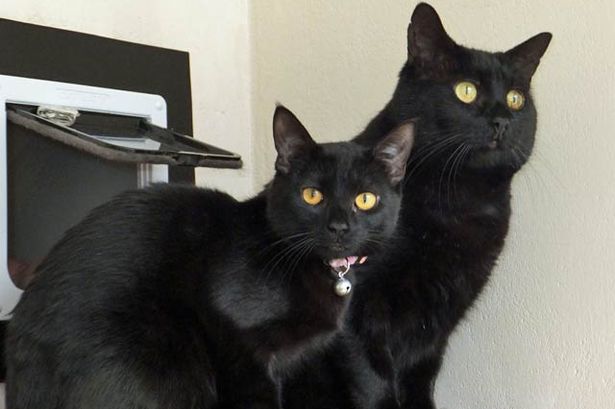 When it comes to choosing a cat, there are so many different factors to consider.

Do you want a long-haired or short-haired cat? A cuddly lap cat or an active explorer? A purebred or a mixed-breed?

And of course, there’s the matter of color. Some people prefer cats with jet black fur, while others are drawn to the bright orange of a tabby.

If you are drawn to black cats with yellow eyes, you are not alone. Lots of pet parents think these combinations of qualities make for the perfect cat.

In this post, we will look at the top black cat breeds that have yellow eyes. Before then, let’s learn some basics…

What Does A Black Cat With Yellow Eyes Mean?

There are a few different interpretations of what a black cat with yellow eyes can mean.

Some people believe that black cats with yellow eyes are bad luck, while others believe that they are a sign of good fortune.

It is not clear where the notion of bad luck associated with black cats originated, but it is believed to date back to the Middle Ages.

In more recent times, however, black cats have been seen as more of a good luck charm.

This is especially true in the United Kingdom, where black cats are considered to be good luck if they cross your path.

So, if you want to have good luck and fortune, you may want to consider getting a black cat with yellow eyes.

No, black cats do not normally have yellow eyes. In fact, most black cats have green eyes while many others have blue eyes.

So, black cats that have yellow eyes are rare and that might explain why they are considered a sign of good luck in some regions.

That said, there are still a handful of black cats that have yellow eyes.

One common denominator with all black cats is how their black coat makes their eye color stand out—whether green, blue, or yellow.

Are All Black Cats With Yellow Eyes Bombay?

In the following section, we will look at 9 fascinating black cat breeds (including Bombay) with yellow eyes that you may not be familiar with.

Bombay is a small to medium-sized domestic cat breed that originated in India.

They have large, yellow eyes that are set wide apart. They also have a short, broad head and small, rounded ears.

This cat was named after the city of Mumbai (formerly known as Bombay).

This is arguably the most popular black cat with yellow eyes. In fact, they are also known as “miniature panthers” because of their sleek black coats.

The Bombay is a friendly and affectionate cat. They are also very active and playful.

Bombays enjoy being around people and get along well with other pets.

The Chartreux is a large domestic cat breed that originates from France.

They are named after the Carthusian monks who lived in the French Alps and were known for their blue-gray fur.

However, some Chartreux cats have black coats and they typically have green or yellow eyes.

Chartreux cats have large, muscular bodies and broad chests. They have short legs and a thick tail that tapers to a point.

Their heads are round with small, rounded ears that are complemented well by their beautiful yellow eyes.

They are affectionate cats that are very playful and curious.

The Korat is a small to medium-sized domestic cat breed that originates from Thailand.

They are named after the city of Nakhon Ratchasima in Thailand, which is also known as “Korat”.

Korats are reputed to be the oldest and stablest breed of cats. Their coats are mostly blue-gray but black ones are also possible.

Korats have small, compact bodies with short legs and thick tails. Their heads are shaped like an inverted triangle and they have large, pointed ears.

They are known for their “heart-shaped” head, which is due to the dark blue coloration around their eyes that makes their yellow eyes stand out.

Korats are very affectionate and loyal cats. They enjoy being around people and form strong bonds with their owners.

The Maine Coon is a large domestic cat breed that originated in the state of Maine in the United States.

Maines are not your typical black cats because they are mostly solid white, red, or blue but some are also black.

They are one of the oldest natural breeds of cats in North America and are known for their long coats and big, bushy tails.

Maine Coons have big, round heads and wide ears. They are one of the few cat breeds that have a water-resistant coat.

Maine Coons typically weigh between 12 and 18 pounds and are known for being gentle giants because they get along well with other pets and children.

The Manx is a medium-sized domestic cat breed that originated on the Isle of Man, a small island in the Irish Sea between England and Ireland.

The Manx is best known for its taillessness, which is caused by a genetic mutation.

They have large, round heads and wide ears. Their eyes are set far apart and are usually green or yellow.

These kitties typically weigh between 12 and 14 pounds and come in a variety of colors but black is one of the most popular.

The Norwegian Forest Cat is another black cat that has yellow eyes. This is a large domestic cat breed that originates from Norway.

They are known for their thick water-resistant fur coats, which is an adaptation to help them survive the cold winters in Norway.

They have thick, water-resistant fur coats that come in a variety of colors including black, white, blue, silver, golden, and cream.

These cats also have a long and bushy tail that gives them balance when climbing, walking, or running.

The Oriental Shorthair is a medium-sized domestic cat breed that originated in Southeast Asia.

They are closely related to Siamese cats and share many of the same physical features, including blue eyes although some have yellow eyes.

They can also be bi-color and shaded. They have long, slender bodies and short legs.

Their heads are wedge-shaped with large ears that are set wide apart. These kitties have a life expectancy of 12-15 years.

The Scottish Fold is a small to medium-sized domestic cat breed that originates from Scotland.

They are named for their unique ear folds, which give them an “owl-like” appearance.

Scottish Folds typically have green or gold eyes and their coats can be in a variety of colors including cream, red, blue, white, and black.

Scottish Folds typically weigh between six and eight pounds and have a life expectancy of 12-15 years.

Personality-wise, Scottish Folds are known for being very affectionate and loyal cats.

They are known for being quiet and gentle kitties but they also enjoy being around people and form strong bonds with their owners.

The siamese is a small to medium-sized domestic cat breed that originates from Thailand (formerly Siam).

They are one of the most popular cat breeds in the world and are known for their blue eyes and striking color points.

The Siamese cat is not an obvious addition to our list of black cats with yellow eyes because they are typically silver-gray with blue eyes.

Other common coat colors include cream, brown, orange, and lilac.

That said, we added this breed to the list because it is still possible to have a black Siamese with yellow eyes. This is because not all Siamese cats carry the Siamese mutation and the result would a possible black coat with green, copper, yellow or gold eyes.

So there you have it, 9 black cat breeds with yellow eyes that are fascinating!

You can now make your pick but remember to research more on the breed of choice to make sure you are a perfect fit. For instance, don’t choose a breed that is active if you are more of a couch potato yourself.