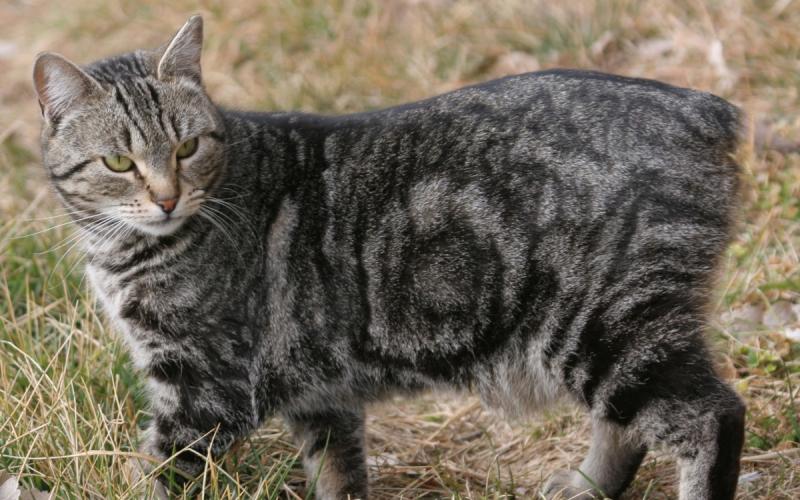 A cat’s tail does more for your kitty more than you’ll ever know.

For one, it’s a communication tool. He raises it up in the sky as a way to greet you.

When he sways it side by side in fast clicks, it means he is about to pounce on something.

You know your fur baby is relaxed and happy when his tail curves at the tip.

Many people don’t know this but a feline tail also offers balance when the kitty is walking in narrow places or pouncing on prey.

With this knowledge, it is hard to imagine a cat without this important body part.

Yet, there are a number of breeds without tails or those with stumped ones.

The beautiful Manx cat is one example with no tail on his rear. He walks around with a stubbly posterior.

The question is: Is the Manx the only breed without a tail? We have a detailed answer for your below.

Why is the Manx tailless?

You identify a Manx cat by its physical features. The biggest one, of course, is the absence of a tail.

A few have stumpy tails but many of them are completely tailless.

Another noticeable thing is the shape of the head. From the rear side, the cat’s head appears cradle-shaped as well.

The breed originates from Britain’s Isle of Man—a remote area located in the Irish Sea.

Being tailless is a result of a genetic mutation that led to one kitten being born with no tail.

This happened centuries ago back when the population of cats was very small.

Over time, inbreeding caused the no-tail trait to become quite common among members of the breed.

Even without a tail, the Manx cat has managed to amass a ton of popularity across the world.

It was also one of the founding breeds for the Cat Fanciers’ Association (CFA) as it was among the first show cats.

The breed has both genes for taillessness and a full tail. When you breed two Manx cats, don’t be shocked to find a litter consisting of both tailed and tailless kittens.

Technically, the Manx is the only breed without a tail.

Granted, there are others with stud tails but this is the only breed without a tail. This means that any cat that is naturally born without a tail is a Manx.

With that said, many people can easily confuse a tailless cat with a tailed one.

There are several breeds with very small tails covered under dense fur. Without a deep knowledge of cats, it can be difficult to tell one from another. We will get into some of the breeds below.

Besides being born naturally, there are other reasons cats can go tailless. One of them is trauma.

A cat can get an injury or an infection perhaps from crushing his tail on the door or suffering happy tail syndrome.

If the issue doesn’t respond to treatment and will cause harm if left untreated, it may warrant surgery or amputation of the tail. The procedure is scientifically referred to as total caudectomy.

What this means is that not all cats without a tail are a result of genetic mutation.

Ultimately, this means that a cat of any other breed except the Manx can exist without a tail. However, if he was born that way, it certainly implies that he is a Manx.

In case you are wondering, here is a list of breeds with tiny tails. Before you rush to the conclusion that a cat in Manx because he has no tail, you might want to confirm if he belongs to any of these breeds:

This is the closest breed to the Manx in terms of the length of tail.

A Bobcat has a stumpy tail resulting from breeding a short-tailed tabby and a Siamese.

The length of the tail varies but it lies in the range of 1-4 inches long.

It is however hard to tell whether these cats have tails or not, thanks to their dense coats of fur that cover the tail.

This one has a tail that resembles that of a rabbit rather than that of a cat.

The breed is beloved for its cute plush coat of many adorable colors and patterns.

He’s also perfect for families, thanks to his affectionate and playful nature.

Notice the trend already? Bobtail cats are the ones with short tails. That’s because bobtail is another word for a short tail.

The Kurilian Bobtail is a sweet cat with origins in the Kuril archipelago and Sakhalin Island in Russia.

He is known for his pom-pom short tail, arched back, clever attitude, and incredible hunting abilities.

With the same backside as that of the bobcat, the Highlander cat has a super short tail.

Genetic mutation as a result of breeding with short-tailed cats in the past is to blame for the phenomenon.

With some bobcat DNA in him, the Desert Lynx is a unique cat breed with a short tail, muscular body, and spotted coat.

He bears a wild appearance and a persona like that of a dog but is social and affectionate as well.

When you think of a cat, you imagine whiskers, two pointy ears, and a long furry tail.

Well, turns out that some cats don’t have a tail. Others have it but at less than a third the normal length of the standard feline tail.

The truth is that a tailless kitty belongs to the Manx breed except if it was amputated.

Cats with Kinked Tails: Everything You Need To Know

Why Is My Cat Pulling Out Fur At Base Of Tail?