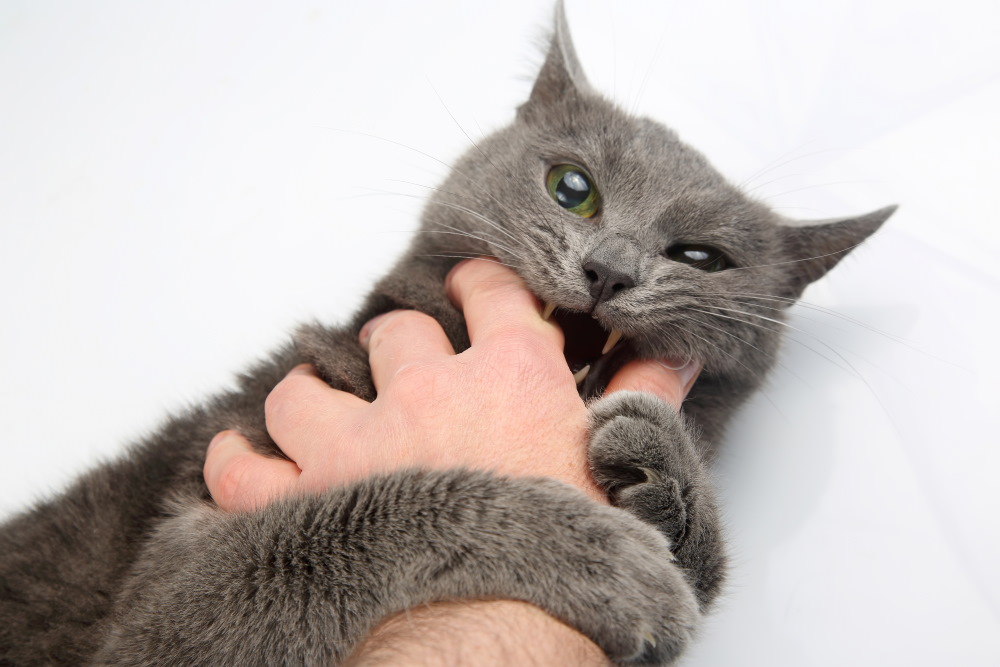 As any cat owner knows, our feline friends are capable of some serious damage when they sink their teeth into something – or someone.

But just how much force can a cat’s bite pack?

Domestic cats have a bite force that ranges anywhere from 20 to 75 pounds per square inch (psi), with an average of about 67 psi.

That may not sound like much, but to put it into perspective, that’s about the same amount of pressure that a human can generate with their jaw muscles.

Felines have sharp and tiny teeth that can easily puncture your flesh and their bite marks can also get easily infected.

The bacteria in a cat’s mouth is quite different from the bacteria in a human mouth, and it can be hard for our immune systems to fight off an infection from a cat bite.

So, if you’re ever on the receiving end of a cat bite, be sure to see a doctor as soon as possible.

And if you’re a cat owner, be sure to keep your furry friend’s vaccinated and also to keep their nails trimmed to help prevent accidental scratches – and bites.

Which Cat Has The Strongest Bite Force?

The strongest recorded cat bite belongs to the jaguar, at 1,500 psi.

But domestic cats are no slouches in the biting department either—as we mentioned, their bites can pack quite a punch.

While there aren’t any conclusive comparative studies on cat breeds and their bite force, experts believe that the bite force of a species will increase with its size.

Going by this standard, we can safely infer that the Maine Coon has the strongest bite force.

The Maine Coon cat is a massive, beautiful creature. As the largest domestic cat breed, Maines typically weighs between 18 and 25 pounds and can grow up to 42 inches long.

Since the bite force of domestic cats ranges from 20 to 75, Maines will most likely have a figure towards or equal to 75.

But Maines are gentle giants that are known for being very intelligent, cuddly, and playful, making them great companions.

So, you don’t have to be worried about your Maine attacking you, your family, or other pets.

Which Is Stronger, A Dog Or A Domestic Cat Bite?

This is a tough one to call, as there are so many different breeds and sizes of both dogs and cats.

However, experts believe that the average dog bite is between 300-700 psi, while the average cat bite is around 67 psi.

This means that, on average, a dog’s bite is approximately 4-5 times stronger than a cat’s.

Of course, there are always exceptions to the rule. For example, the American Pitbull has a bite force of 235 psi, which is stronger than that of most dogs.

And as we mentioned before, the Maine Coon cat has a strong bite for a domestic feline.

So, ultimately, it depends on the individual dog or cat.

Which Is Stronger, A Human Bite Or A Domestic Cat Bite?

While the domestic cat’s bite force is nothing to sneeze at, it’s still no match for a human’s.

So, while a cat may be able to do some serious damage with their teeth, humans are definitely stronger when it comes to biting power.

So, there you have it! The average domestic cat’s bite force is around 67 PSI.

But there are always exceptions to the rule—some cats, like the Maine Coon, can have a much stronger bite – as much as 75.

And while a cat’s bite may not be as strong as a human’s or a dog’s, it can still do some serious damage.

So, be sure to see a doctor if you ever find yourself on the receiving end of a cat bite.

And if you’re a cat owner, be sure to keep your furry friend’s nails trimmed and vaccinations just to be on the safe side.