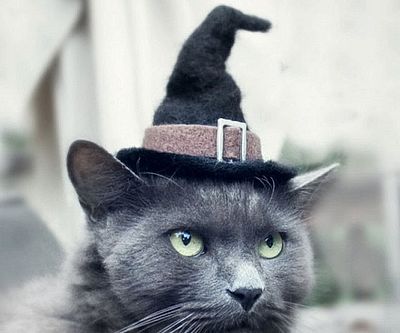 Of all animals, the housecat is believed to be the most superstitious.

In some parts of the world, it brings good luck. In Japanese folklore, for instance, a cat is a symbol of good fortune.

To this day, the Maneki-Neko figurine parades restaurants and other business premises for this very reason.

In Egypt, cats used to be worshipped as gods. Even China and India once had fertility goddesses in the form of cats.

Sadly, in very many other regions of the world, the black cat is considered bad luck. It is not uncommon to hear people associating it with demons and witches.

The sight of any black cat is believed to be a demon or witch in a feline.

You must have already come across the myth that when a black cat crosses your path, expect something bad to happen to you.

Among the many myths surrounding cats, these days is that these sweet house pets can suck your soul. Is that true?

The Origin of the Superstition

The belief that a housecat can steal souls has been around for a couple of centuries.

In England, many believed that a cat was capable of climbing on a child’s chest and sucking its breath until it suffocates and dies.

Some cats are thought to do this out of sheer jealousy since the newborn is getting too much attention.

During a 1791 court proceeding in Plymouth, England involving the death of an infant, the jury ruled that a cat had killed the little one.

Before the jury made the decision, the superstition of cats sucking babies’ breath had been around for some centuries.

There are print sightings of the belief from 1607 and 1708. These tales must have influenced the panel to arrive at the cause of infanticide.

Recently, in 1929, an article on a cat literally sucking the breath of a baby was published in the Nebraska State Journal.

In the report, a doctor confessed to witnessing a cat lying on an infant’s chest, pressing its jaws on the sides of the baby’s mouth and pressing its lips on those of the infant.

The young one’s face was pale as that of a dead person and its lips had turned blue, meaning death was close.

Can Cats Suck Your Soul Away?

Rather than sleeping next to their owners, they prefer lying across the face and feeling them breathe.

They do the same for newborns and infants. Some of the felines nestle under the chin and against the throat.

Ask any cat owner and they will confirm that their pet indeed loves snuggling in these areas.

Does it mean that cats can suck your soul away?

Not really. The claims that felines are soul-stealers are simply untrue.

In a review article titled ‘The Psychology of Extraordinary Beliefs” published on OSU.EDU, there’s no evidence to support the theory that cats can steal human souls.

In the case of the 1971 court proceeding, it was ruled out that the baby didn’t die from suffocation from the house cat. The cause was perhaps sudden infant death syndrome (SIDS).

The psychology article further suggests that people jump to such beliefs because of misinformation.

Once the rumor starts and picks up speed, it reaches many who without evidence believe the lie.

The common stereotypes about felines make things worse. For parents whose kids die of unknown causes, finding someone to blame helps with the guilt.

While some may want to believe that a cat lying too close to the face is superstitious, it is mostly an issue of convenience for the feline.

Do Cats Steal Your Breath While You Sleep?

Do Cats Check If You’re Breathing?

Generally, cats with this habit do this for several reasons – none of which is about murdering their owners.

Some of them are listed below.

Marylin Krieger, a certified Californian cat consultant, and coach says that cats love sleeping on the head region for the simple fact that it is warmer than other parts of the body.

The heat that comes from the body goes out via the head. Cats have a higher body temperature than humans which explains why they choose warmer areas to lie.

Additionally, there’s less disturbance on the head and face compared to the feet where there’s tossing and turning.

Kittens also sleep on the human face so they can feel the sound of their breaths and snores.

This assures them that they are sleeping next to a purring creature.

3. The Smell of Milk

Another theory that explains why cats love sniffing infant breaths is because they love the scent of milk on their mouths.

Some cats cannot resist the smell. Where best to delve deep into it than on a newborn’s mouth?

So, no, your kitty is not trying to steal your baby’s soul. He simply wants to enjoy smelling her after she’s nursed or fed on the bottle.

Cats are big on marking territories. That’s why they head-butt their loved ones and stroke them using their whiskers.

Rubbing their face against that of their owners also spreads their scent.

It lets other cats know that the owner is ‘taken” and should be left alone.

Do Cats Protect You While You Sleep?

Perhaps your kitty is displaying weird behavior that makes you wonder if she’s out to harvest your soul. The many superstitious beliefs surrounding cats put questions on your mind.

The truth is that cats are sweet, loving pets with no supernatural powers whatsoever. All the myths aren’t backed by science.

Relax and don’t worry about your soul being sucked out by your adorable furball.

When Can A Kitten Sleep In Your Bed?

Cat Sleeping With Head Down: Should You Be Worried?