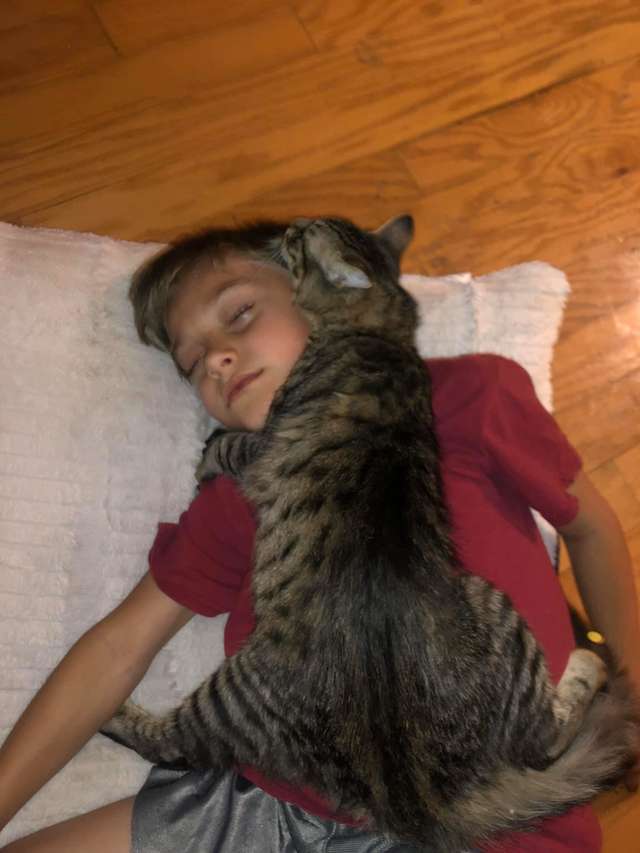 It’s quite common for cats to lay on their owners’ chests or crouch next to their mouths while they sleep.

While this habit by our feline friends is considered a sign of affection, some believe that is proof that cats can steal your breath while you sleep.

There are a few different theories that support this idea:

But irrespective of the explanation, the notion of cats stealing your breath in your sleep has been around since the 17th century.

So, What’s The Truth? Do Cats Steal Your Breath While You Sleep?

There have been reports that cats climb into the baby’s crib at night to steal their breath.

It is almost the go-to explanation for all babies who die in their sleep.

But is there any evidence to back these claims?

Well, in 1719, a coroner report of a child who had died in their sleep blamed it on their cat.

According to the report, the cat must have climbed into the baby’s crib and stolen his breath, resulting in his untimely death.

This coroner’s report is the gas that put this theory to flame and has led to the growth in popularity of the urban legend today.

But this report shouldn’t be taken seriously. In fact, the coroner’s report was eventually debunked by medical experts who explained that babies can die in their sleep due to a condition referred to as Sudden Infant Death Syndrome.

Luis Navarro had noticed that he was having difficulty breathing at night and so he installed a camera to help him figure out what the issue was.

To his utter amazement, the camera revealed how his cat not only came to sniff his breath at night but even laid on his face.

This account attracted lots of interest and prompted other pet parents to share similar incidents on the thread. This is often cited as another evidence that the cat is trying to murder them.

But this is farfetched since cats are too small to suffocate an adult or even a baby.

The most probable explanation is that the cat just wants some affection or maybe they are calmed by your breathing and regular heartbeat.

It is also a fact that our feline friends are attracted to a baby’s breath.

Some people also believe that the cats are driven by jealousy because they notice the newborn baby may be getting more attention from their parent.

This theory suggests that cats will act on their jealousy by trying to suffocate the baby by stealing their breath.

But contrary to this urban legend, cats are not drawn to the baby because they want to suck their breath and kill them.

On the contrary, cats just love milk and a baby’s breath often has a milk scent that will attract the cat.

Additionally, cats love getting cozy and comfortable and there is a good chance that they climb the baby’s crib to get the warmth.

So, to put it plainly, no cats do not steal your breath when you sleep. They are just trying to cuddle or looking for some warmth.

Cats are attracted to the warmth of their owner’s bodies, and they also enjoy the sound of their heartbeat.

So, it’s likely that when your cat jumps on your bed, they are just seeking out these physical comforts.

However, it’s also possible that your cat knows when you are sleeping because they can sense your body’s relaxation and lack of movement.

Cats are very attuned to their environment, and they can pick up on subtle changes in our behavior.

So, next time your cat seems extra cuddly, it might just be because they know you need some extra rest!

Will My Cat Hurt Me In My Sleep?

Lots of people worry that their cats will hurt them in their sleep, but the reality is that cats are generally very gentle creatures.

We have already debunked the issue of the cat stealing your breath but they will also not harm you physically.

While it’s true that cats have sharp claws, they rarely use them to harm humans. Instead, they reserve their claws for hunting and self-defense.

When cats play with humans, they typically use their mouths and paws instead of their claws.

That said, there are a few exceptions to this rule. If a cat feels threatened or afraid, it may use its claws to defend itself.

Additionally, some kittens may nip at hands or feet while they’re teething. However, these behaviors are usually quickly outgrown.

So, if you’re wondering whether your cat will hurt you in your sleep, the answer is no.

Has A Cat Ever Murdered A Human?

No one can say for certain whether a cat has ever murdered a human.

There have been myths around this subject but it has never been scientifically proven.

Besides, cats are known to hunt small prey, and it is, therefore, impractical to think that a cat would ever think of killing a human.

Cats have often traditionally been associated with evil, thanks to folklore. For instance, there is the old wives’ tale that meeting a black cat is a sign of misfortune.

Such stories may have shaped some negative views that we often have on these otherwise gentle creatures.

The truth is it is unlikely that a cat would ever kill a human.

So, in summary, there’s no need to worry if your cat sleeps on your chest; they’re not stealing your breath.

Cats are simply drawn to the warmth and steady rhythm of your heartbeat, and it’s perfectly natural for them to want to curl up close to you.

So, enjoy the snuggles—your kitty is just trying to show you some love.

If you still have questions related to cuddling with your kitty, feel free to check the following posts:

Do Cats Protect You While You Sleep?

When Can A Kitten Sleep In Your Bed?

Cat Sleeping With Head Down: Should You Be Worried?