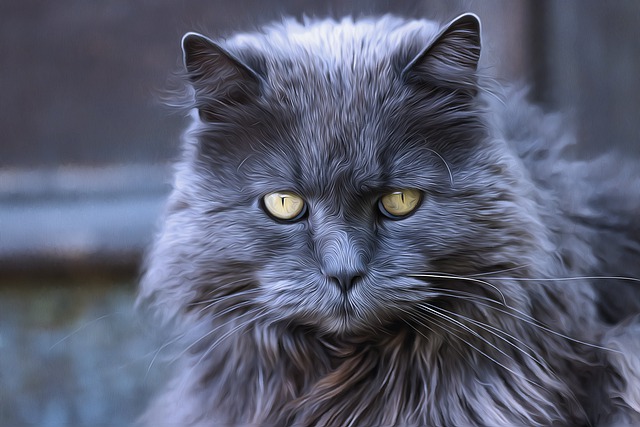 Just one glance at their insanely cute grey fluffy coats and you will immediately fall in love with a grey long-haired cat.

From grey to silver and everything in between, this coat color is not what you see every day.

It is striking, mysterious, and calm in a very attractive way.

To many, a grey cat with long fur is too rare to find. Granted, that is true to a certain extent but there are a ton of such cats if you know where to look.

If you are searching for long-haired grey cat breeds, we have just the list for you.

The Nebelung is a pretty ball of feline fur with roots in Germany.

The name is German for ‘creature of the mist’ which came about as a result of its eye-catchy grey coloring.

The coat is similar to the Russian blue’s shimmering silver coat only that the Nebelung is long-haired.

It boasts long dense fur that gives the cat a cute fluffy appearance. The tail is plummeted and the neck round.

At face value, this breed may appear shy and innocent but if you get to interact with him, you’ll discover he’s quite friendly and outgoing.

He loves exploring his world and playing although he also enjoys calmness and independence for the most part.

On the second spot, we have the active and energetic cat by the name of Devon Rex.

This one is medium-sized with a broad chest and a rather large head.

The eyes and ears are unusually huge giving him an elf or pixie appearance of sorts.

The Devon Rex has a soft curly coat with long hairs. Sadly, the coat is quite fragile. Excessive grooming can cause the hairs and whiskers to fall off. Care needs to be taken during grooming.

As for personality, expect a delightful cat—always loving to play and mess around with your head all in a bid to get your attention.

Want a cat that is playful, friendly to kids and other pets, and is incredibly affectionate?The Norwegian Forest breed ticks all boxes.

Back in the day, all he did was prowl in the forests of Norway looking for food.

However, that has since changed. All he seems to do now is cuddle with humans and explore his surroundings.

He’s sweet, family-oriented, and truly friendly. His thick coat can handle all kinds of weather.

Most Oriental Cats are short-haired but there are a ton of long-haired versions as well.

The coat is silky and dense but doesn’t have a wooly undercoat like most long-haired varieties.

The coat actually lies smooth against his body making him a semi-longhair.

If you own one, be sure to include him in everything. That way, he’ll thrive and feel right at home.

The Persian cat breed is a medium-sized ball of fur. The common colors are white and off-whites with varied patterns but there are greys and silvers as well.

The coat is thick and long with a comfy soft undercoat.

Persians come with broad and round heads, wide-set ears, large and round eyes, short legs, and a short bushy tail.

They are generally calm and affectionate cats. Their activity levels don’t match those of the active short-haired versions. They simply love to sit around looking pretty.

The Scottish Fold dates back to the early 1960s when William Ross  (a shepherd) discovered a cat in a barn called Susie in Scotland.

Over the years, this breed has shown that he can be a real human companion. He can lie on your laps all day long.

Despite the cute long and silky grey coat, the folded ears will blow your mind.

The ears give the cat the appearance of an owl. The eyes are big and round and make the cat have a sweet expression on his face.

No doubt this is such a beauty to behold. To add to that, Scottish Folds are loyal, intelligent, and super inquisitive.

It’s said to have been around for 100 years and has developed some real character over time.

This breed is famous for its agility and powerful muscles. He can leap long distances at a time without any problems whatsoever.

The long-haired coat with thick fur also makes him remarkably beautiful and insulates him from the cold.

Playfulness is his third name, so expect lots of that. He’s essentially friendly and outgoing.

The British Longhair is a medium to large domestic cat with a deluxe fluffy coat and a face that is similar to his shorthaired brothers.

This breed actually comes about as a result of breeding the British shorthair and a long-haired cat such as the Persian.

He weighs anywhere from 6 pounds to 16 pounds and stands at a height of 12-14 inches.

He’s sociable and affectionate but doesn’t like too much activity.

If you are looking for a feline friend that makes for a great companion without demanding too much from you, this one fits the profile.

With an incredibly playful nature and tons of affection, the Turkish Angora is the most popular breed out there.

He blends so well with humans and simply loves to love people.

Most of them come in the white color but if you are lucky to get a grey version, you might have just hit the jackpot.

No doubt, this long-haired grey cat is easy on the eyes. The coat is elegant, long, and silky.

Sure, it will require plenty of grooming to maintain its beauty but nothing a bath/massage/grooming brush can’t do.

Plus, the deep affection and joy are pretty good rewards for the work done.

The Domestic Longhair comes in virtually all imaginable colors, including grey and grey tabby.

This is a mixed breed actually and is not considered as a pedigree.

He is however one of the most charming feline companions to have at home.

Unfortunately, it is hard to tell the exact personality because of where he gets most of his genes from.

The best part is that he is less likely to suffer from the health complications known to other pure breeds.

There it is – 10 grey long-haired cat breeds.

Nothing screams beautiful more than a grey-colored cat with a thick ball of fur.

Oh! How fun it is to run your fingers through the coat over and over again.

Keeping the coat in top shape round the clock may be a huge task but that’s a small price to pay for the joy that he will bring to your life.

Everything You Need to Know About Curly-Haired Cat Breeds