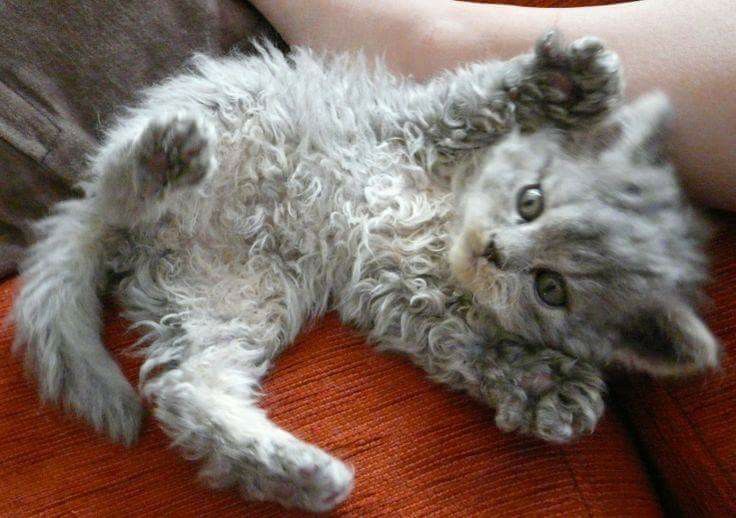 Curly-haired cats are celebrated for their distinctive coats. They are edgy, elegant, and glamorous, more like their canine counterpart, the Poodle.

This special group of cats is actually referred to as ‘Poodle Cats” for this reason.

Sadly, these fur babies need plenty of grooming to keep mats at bay.

If you are looking to buy a curly-haired kitty, we have everything you need to know about them.

Where Do Curly Cats Originate From?

Curly cats can acquire curly hair from a genetic mutation as is the case with the famous Selkirk cat.

The breed has a dominant gene for curly hair. Not only does the gene cause curling of hair but also affects the litter of the said dam.

Granted, not all babies will have the gene but about half of them will.

The Selkirk is the curliest of all cat breeds. Everywhere including the whiskers are curly.

In the case of other breeds, curls come about when a layer of the coat is missing.

Ideally, cats have three layers of hair – the outer layer called guard hair, the middle hair known as awn hair, and the last one, down hair.

When any of the layers are absent, the kitty can have curly hair.

Devon Rex, LaPerm, and Cornish Rex get their curly hairs from this specific cause.

The Cornish Rex has a short coat characterized by tight waves of fur lying close to the skin and tends to be particularly short and curly on the chest and belly.

Unlike other cat breeds, the breed lacks guard and awn hairs, making her prone to hair loss.

The nature of the coat also makes them quite vulnerable to weather and temperature changes, which is why they are famed for being indoor-only cats.

Genetically, the coat is encoded by a recessive r gene, which means that kittens that inherit the gene from both the father and mother (homozygotes) will carry the trait.

Devon Rex has curly fur with a distinctive soft, fine, and full-bodied texture.

In particular, the fur is thicker on the sides of the body, back, tail, face, ears, and legs.

However, the top of the head, chest, neck, chest, and belly tend to have shorter fur.

The curly coat is quite fragile, making him vulnerable to excessive grooming.

Genetically, the coat is encoded by recessive re gene, so only homozygotes will manifest the mentioned traits.

The LaPerm’s coat is short and wavy, making him look as if he just stuck his paw in an electric socket and got a shock.

At birth, they can be shorthaired or bald, with the curly coat only coming in at maturity (at about ten months).

The LaPerms’ coats can be short or long and cover the entire body, right down to their curly tails.

However, not all The LaPerms develop the curly coat—some are born with a straight coat and carry it throughout their lives.

Genetically, these cats’ coats are encoded with a dominant Lp gene, which means that they can be curly even if they inherit the gene from one parent (heterozygote).

Compared to the three rex cats we have highlighted so far, Selkirk Rex’s coat is the most curled.

The curly fur covers the entire body but is more pronounced in the neck and tail.

The coat is plusher and fuller than that of LaPerms and longer and dense than those of Cornish Rex and Devon Rex.

Generally, the kittens are born curly but lose the curls at about 6 months and grow straight but sparse coats.

When they reach maturity, however, they develop soft, thick coats that resemble lamb’s wool—that’s why he is referred to as “a cat in sheep’s clothing” in some feline circles.

Like other rex cats, not all Selkirk Rex cats are curly—some have straight coats and can be born from the same litter as curly ones, courtesy of the Se gene.

The Se gene is incompletely dominant, which means one thing:  all cats can be curly.

Besides the Rex Class Cats, there are other less-known curly-haired breeds in the development, including:

Rexed variants have also been identified in domestic cats, Persians, Maine Coons, and other cats.

All cats shed their fur from time to time. It is a painful reality for any cat owner.

Your furry friend sheds to replenish her hair and ensure it is in good condition.

As a matter of fact, if she doesn’t shed, you should be worried. Sick cats don’t shed.

In the wild, kitties shed heavily in spring to get rid of the heavy winter coat. They would also do the same just before winter to prepare for the cold season.

With domestication, our feline buddies cannot tell winter from other seasons. As a result, they tend to shed throughout the year.

With that said, some kitties shed more than others.

Curly cats fall in the category of low shedders.

Devon Rex and Cornish Rex are two examples of cat breeds that score very well when it comes to shedding. Both have short, curly hairs that are very close to their bodies.

This is awesome news if you have allergies or have no time to clean cat hair every day.

Please note that while curly cats shed a little, hair can easily get tangled in their coats.

You have to groom your kitty regularly lest the trapped hair graduates into ugly mats.

Is There A Hypoallergenic Curly Hair Cat?

Since they shed very little, curly cats are considered ‘hypoallergenic” by people with allergies.

However, according to PetMD, a hypoallergenic cat doesn’t exist.

Turns out, allergic individuals don’t particularly react to cat hair but rather proteins in the kitty’s saliva, urine, and skin.

The allergen produced by the cat’s body finds its way to her fur. As she licks herself, tiny flakes of her skin fall on the carpet, walls, rugs, furniture, and floors. Other allergen particles remain suspended in the air.

If the protein enters your nose and lungs, it will cause itchiness, nasal congestions, and watery eyes. In worst cases, this can graduate to asthma.

Different cats produce less of the allergen. Some have more of it in their saliva than their fur.

A cat with plenty of dander does not necessarily produce more protein but they release a lot of the protein to the environment.

The thing with the protein is that it can hang in the air for even one month. Even after letting go of the cat, the effects can last that long.

So, curly cats may not be hypoallergenic but they reduce the chance of allergies substantially.

How Much Do Curly-Haired Cats Cost?

As you might have already guessed, curly cats don’t come cheap.

All the four curly-haired breeds including the Selkirk Rex, Devon Rex, Cornish Rex, and La Perm are pretty hard to find.

Whether you are buying or adopting, expect to run into challenges finding one.

At any given time, only a few curly cats are available for adoption.

The Selkirk Rex costs between $800 and $1500. The other breeds cost just about the same.

A cat with curly hair is one of the most adorable creatures.

The fact that they are rare makes them cuter, delightful, and mysterious.

If you own one, Lady Luck is truly on your side. As long as you groom her frequently, your kitty will always turn heads.

How many Hairs are on a Cat?

Brindled Cats: A Complete Guide to your Kitty’s Pattern

Fever Coat Kittens: Everything You Need to Know