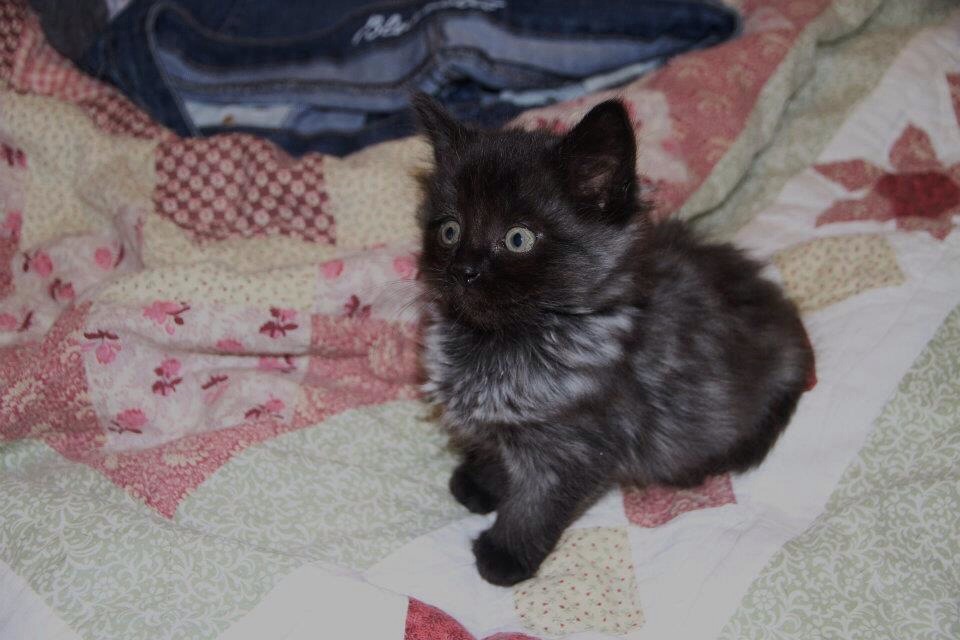 Kittens are some of the most snuggly creatures on the planet. When you are next to one, you can’t help but run your fingers over her little furry body. When she snuggles on your lap and purrs lightly, you will want to capture the moment forever. Did you know that these little fur balls can change their color? That’s right—some kittens are born with a different color than their actual color, a phenomenon called fever coats. If you’ve seen your little escape artist transform her coat color within her first year of life, she certainly has a fever coat.  In this guide, we reveal all the facts you need to know about this interesting group of kitties.

What Is Fever Coat?

Several cats have caught the attention of the internet, thanks to their unique coats. The first one is Bruce the Cat, a rescued kitty that was born with a silvery coat that later changed to black. Another recent fever coat case was discovered by the National Kitten Coalition by the name of Rizo. Susan Spaulding found the kitten after a few hours with a silver-colored fever coat that would later turn into black.

A stray cat in Los Angeles also gave birth to a litter of seven adorable kittens with distinct coloring in April 2017. At birth, all the kittens had a beautiful silver coat. As they grew older, all of them transformed into adorable cats of different colors and patterns. Some turned out to be torties, others tabbies, and one became black with a grey patch on the shoulder.

What Exactly Is a Torbie Cat?

Although there’s no scientific evidence for the cause of the fever coat, it is believed that the coloring is a result of an inappropriate deposition of pigment in the fur coat. It happens when a dam is sick, experiences stress during the pregnancy journey, or has an infection. The trauma affects a feline’s immune system thereby leading to a shift in the color of the cat’s hair follicles.

If the problem induces fever, the cat will have so high temperature in her body that it will shift the color of the kittens to cream, silver, gray, reddish, or silver frosted hues. Turns out, coat pigmentation is sensitive to heat. When the heat goes higher than the allowed limits, the litter will feature different coats than what they would have.

Is Fever Coat Harmful To The Cat?

Although a stress coat phenomenon sounds scary, it is quite harmless for the cat. There’s no evidence that it is linked to the health of the cat in any way. No parent with a kitten with a fever coat has ever reported any issue with their kitten.  It does not lead to any health issues or genetic abnormalities. It only means that the pigment did not develop as it was supposed to in the womb—that the mother of the kitty had an infection and a stress-related condition that affected the color of her babies, nothing more than that. Unless the fever coloration bothers you, there’s no reason to worry. Even if it does, you will not have to wait too long before the coloring clears up on its own.

Fever coat manifests in different ways including the following:

How To Tell If The Kitten Has Fever Coat

Fever coats can be easily confused with the undeveloped color common with color-pointed cat breeds such as the Himalayan and the Siamese. However, the two are totally different. The latter is a condition caused by a low temperature of under 100 degrees. This is lower than the temperature of the womb. The outcome is a cream-colored cat with the cool regions of the bodies including the paws, tail, body, ear tips, and face having a different color.

To know if your kitten has a fever coat, you will have to wait for a while. The coloring should clear up in a few weeks or months exposing the true color of the kitty. If he is a point, his fur will get darker by the day.

Cats with fever coats are not your everyday cats. They are quite rare. Perhaps not as rare as chocolate, smoke, or lilac kitties but don’t expect to walk into your rescue center and find a fever coat cat. You’d be lucky if you came across one. Breeders have a habit of selling kittens with stress coats as rare. They do this to push the price over the roof. Others lie to potential customers that fever coats are smokes in the hopes of making a huge killing. Smoke cats are sought-after because they are truly rare and unusual. Unsuspecting clients often get shocked when their kitties turn color and become normal-colored felines.

Fever coat is a temporary coloring. No adult cat has a stress coat. Those that do are either smokes or point-colored kitties. Generally, the condition goes away from 4-8 months. In the case of Bruce the Cat, the coloring went away completely after 8 months. Some kitties turn color earlier than others. If yours doesn’t reveal its normal color by the age of six, don’t panic. Give it two or three months before you conclude. If the color remains the same after 8 months, it simply means that the cat is a smoke, silver, or a color-point. Sometimes, it’s hard to tell the difference between these color and pattern variations.

A smoke cat looks somewhat like a fever coat but instead of having an entire color on the fur, he will have color on the tips while the rooms will be white. You can tell a smoke from parting your kitty’s fur. You should be able to perceive that the fur is bright white while the tips are darker. All smoke cats have a solid color. A tabby cannot be called smoke for this reason. The smoke effect is more common and noticeable on long-haired felines. Since their hairs are longer, the white part is more visible. Smoke cats often have manes with white fur but the coloring can also be seen in body parts with the longest hairs.

The smoke effect in cats is caused by the inhibitor gene whose responsibility is to hinder the cat’s ability to produce pigment in the fur. To be more exact, the gene inhibits the production of pigment at the base of the fur for non-agouti felines. For agouti cats, the gene affects red pigment production. A smoke cat has to have a dominant allele of the coat color gene and be a recessive homozygote for pigment gene (d/d).

A black smoke cat is basically a black cat with white roots and some coloring behind the ears and the neck. If it is a long-haired breed, the cat will have a neck full of brightly colored fur that makes him appear as though he is wearing a neck scarf. Short-haired black smokes appear to have a ring around their necks.

A fever coat has silver, gray, cream, or red color over the whole body. He can also have patches or stripes as mentioned above. A black smoke, on the other hand, is a black cat but whose fur has white roots. To tell one from the other, split the fur. If the kitten has bright roots in her body or certain parts, she is a smoke. Else, if the roots are black or silver all the way, she is a fever coat. In such a case, the coloring will disappear over time.

When your adorable kitty changes the color of his fur all of a sudden, it can be a confusing time for you. If you are not knowledgeable about what is going on, it is easy to think that your kitty is suffering from something deadly. However, don’t be. The condition not only clears on its own but also poses no health risk to the kitty.

Related Post: Everything You Need to Know About Curly-Haired Cat Breeds