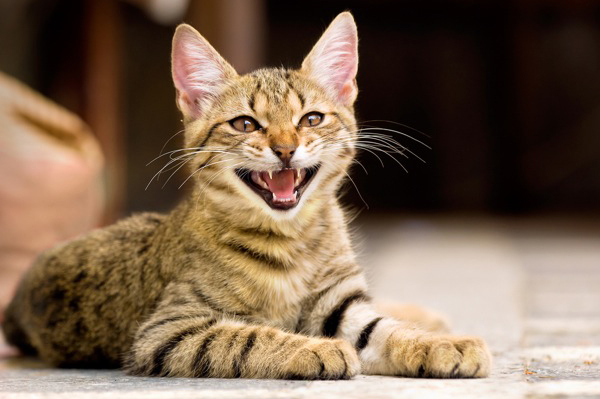 Cats are not only cute but they produce some of the cutest sounds ever.

As kids, many of us were taught that kitties only meow. Now that we have grown up, we’ve realized that felines can do so much more.

They can purr, chirp, yowl, growl, hiss, and even chatter.

Each one carries a specific message that cat owners should be conversant with.

Once you know what all the cat vocalizations mean, you will have a much better relationship with your kitty.

Most cat parents can interpret purring and meowing but a cat chattering at them? That can be really confusing.

Does that mean the pet wants something from you? Perhaps she is angry at you or something.

If you are looking for the answer, we have got you covered.

Why Do Cats Chatter?

Before we take a look at the reasons cats chatter at their owners, it would be prudent to know why these creatures chatter in the first place.

In case you don’t know, chattering is a specific sound that resembles chirping only more faltering and deep.

Speaking to Inverse, Frania Shelley-Grielen, an animal behaviorist, posits that chattering is a kitty’s way of expressing anger mostly related to prey or food.

“While different cats have different reasons for chattering, we typically notice that they exhibit the sounds around prey species that get them excited like birds”. Grielen tells Inverse. The sounds may be aimed at the object that attracts the kitty’s attention.”

By making chattering sounds, the cat is essentially showing disappointment over not being able to reach for prey.

In most cases, this happens when there’s a glass window separating the furball and a bird or rabbit. The vocal sounds are triggered when the kitty’s hunting instinct check-in.

Physical changes in her body including wide eyes, dilated pupils, and ears that move forward may accompany chattering. The pet’s focus is on nothing else but the prey.

Marilyn Krieger, a certified cat behavior consultant (also called The Cat Coach) says that cats chatter out of an instinctual response to the hunt.

According to her, chattering may be triggered by a release of neurotransmitters like dopamine and cortisol into the cat’s system.

While in most instances the thrill of the hunt illicit chattering, sometimes frustration causes the exact same reaction.

An example is if a glass separates your kitty from her prey. She will chatter at the window to show pure frustration of being unable to reach the prey.

Kriegel also says that some kitties chatter during play and others over a laser pointer.

Other sources also claim that chattering is a smart move on the kitty’s part to fool her prey into coming closer to her. As far as she is concerned, the chattering sound mimics that of the prey they are hunting.

Research on this topic was done in the Amazon forest of Brazil. The researchers discovered that the wild cats located there would mimic the sounds produced by monkeys thus fooling them to come near the felines.

If this is true, your cat’s chatter is another strategy to bring her prey closer to her.

What Does It Mean When Your Cat Chatters At You?

While it makes total sense for a cat to chatter at the window, it is baffling to see your beloved friend making the same sounds to you.

Surely, she doesn’t see you as prey now, does she?

Here are a few reasons cats chatter at their owners.

We’ve established that cats chatter out of excitement—often concerning a meal or prey.

If your pet has a habit of chattering at you when you are holding her meal or a favorite treat, she may be trying to show her excitement for dinner.

The meal cannot be compared to prey but she is just about to feed.

If you know anything about cats, you probably understand that their world revolves around food. Nothing makes a kitty happier than looking for food, finding food, and eating it.

Similarly, your kitty chatters at you because perhaps you are taking too long to present the food or treat.

It is the same scenario as being in a restaurant and watching a waiter bring you a delicious plate of your favorite cuisine only to stop midway and start chatting with his colleague.

To your kitty, the meal is unreachable—at least at that moment. Much like looking at a bird outside the window, the frustration of not being able to eat will drive her nuts and cause her to chatter.

Here’s another possible reason why your kitty is chattering in your direction. You are holding something that resembles prey and she wants it.

These days, pet manufacturers produce toys products that mimic the actual animals in more ways than one.

For instance, you can get your kitty a mice toy that looks like the mouse she just hunted last night. Or a fish toy that looks and feels like real fish.

While you can tell the difference between the toy and the real thing, your cat can’t do that.

As you hold the adorable toy, her hunting instincts will kick in. The excitement of the hunt will follow suit.

You may notice her teeth chattering as well and her body showing signs of readiness for the kill. She may even pounce at you in a bid to get to the toy.

Some will just chatter because you stand in the way of them getting to the prey. This rings true if the toy is dusted in catnip.

Remember the study above that shows that cats chatter when they are annoyed?

Well, if your furball makes this unique sound at you, she may be just annoyed with you.

Perhaps it’s mealtime and you are not showing any signs of giving her food.

Or you just yelled at her when she was devouring her meal.

Either way, anything related to food is sensitive around a cat.

Unless your cat drools heavily alongside chattering, you should not worry the least bit when she makes the sounds.

If she does, have the vet check her out as this may indicate an underlying health problem.

Else, just laugh about it and get on with your day.

Why Does My Cat Come to Me When I Cry?

Why Does My Cat Come to Me When I Sing? (6 Potential Reasons)

Can Cats Sense Depression and Anxiety?