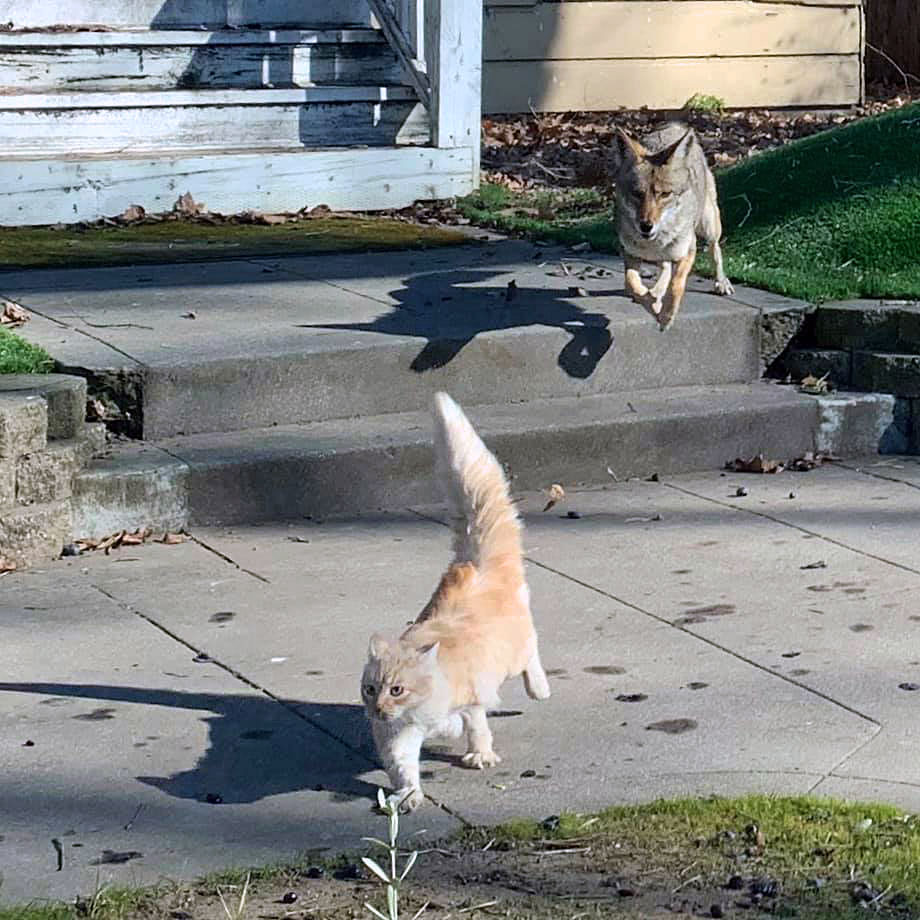 There is a saying that dogs are marathoners but cats are sprinters.

That said, Coyotes are especially fast and can easily outrun any cat.

By that standard alone, it is clear that a cat cannot outrun a coyote.

But there is more: unlike coyotes which hunt in packs, cats are solitary hunters which rely heavily on explosive power, flexibility, and stealth.

For instance, from a crouching position, your cat can leap up to 9 times its height.

They can also make sudden changes in direction without falling.

Cats can even twist their spine in the air to avoid landing on their backs or sides.

But as impressive as all that is, they are still no match for coyotes which are not only faster but more equipped for longer chases.

Even if the cat was to be faster than the coyote, the coyote would still have the unfair advantage of being built for longer chasers.

In other words, the cat would eventually wear out and the coyote would catch up.

Can A Cat Defend Itself Against A Coyote?

Cats are ferocious hunters and studies have revealed that they are responsible for killing hundreds of millions of birds and small mammals each year.

But as is the case with every hunter, cats can be hunted too—and especially with coyotes.

It is estimated that at least 50% of all coyote-cat encounters result in the death of the cat.

So, even though the cat might try to defend herself, she is no match for a coyote.

Cats make the most common dinner for coyotes. This means the coyotes intentionally target cats because they know they can easily overpower them.

How Far Away Can A Coyote Smell A Cat?

Coyotes arguably have the best sense of smell among modern predators. They can pick up a scent from as far as 350 yards.

Coyote hunters have a tough job because it is almost impossible to get within firing range before they pick up the smell and run for it.

Hunters usually practice scent control to increase their odds but we can’t say the same about cats.

Coyotes can easily pick up the scent of a cat, rabbit, rodent, or any other animal from hundreds of yards away.

They will then stealthily approach and pounce on the unsuspecting victim.

If coyotes are common in your area, it is a good idea to keep your cats indoors.

Cat litter can get stinky and some people resort to placing the litterbox outside where there is free circulation of air.

Even though this is a sure way of dealing with the stench, it introduces an even worse problem – predators.

Coyotes and other predators are attracted by cat poop and urine, so placing the letterbox outside is a bad idea.

When trapping or hunting coyotes, cat litter is usually used as bait because it is very effective in attracting predators like coyotes.

This is the main reason why cats always bury their poo—they know leaving it exposed is a sure way of attracting predators.

How Often Do Kittens Poop?

Why does my Cat watch me Poop?

How Do Coyotes Catch Cats?

Coyotes are skilled hunters and they are known to prey upon cats and small dogs.

Most cat owners don’t want to keep their cats indoors all day. Even though they are aware of the danger of coyotes, they also believe the cats can climb a wall or a tree at the first sight of danger.

While this is true, coyotes are also quite agile and can easily jump over a six-foot obstacle to grab the cat.

Coyotes prefer hunting rabbits and mice but they will readily take cats if they are available.

It is estimated that cats make 20% of a coyote diet.

Pet cats are domesticated and this means they are ill-equipped to defend themselves against a predator the size of a dog.

Once a coyote detects the scent of the cat, he will move stealthily towards the cat and then pounce upon him.

Cats often put up a fight but they will almost always lose.

Coyotes grab cats in a locking grip with their powerful claws and then kill them with their razor-sharp teeth.

Once a cat has been grabbed, there is very little chance of escape and if he escapes, he will be left badly wounded.

How to Protect Your Cat from Coyotes

As we have already established, your cat cannot defend itself against a coyote. This is compounded by the fact that coyotes are pack hunters that seldom hunt alone.

It is therefore a good idea to take some protective measures to safeguard your cat from coyotes.

The following are some things you can do.

Some people argue that keeping your cat indoors is inhuman.

But if you consider the danger they face of being torn to pieces by a ferocious coyote, keeping your cat indoors will sound very good.

It’s ok to allow your cats to play and bask outside but always ensure you have brought them back indoors for the night.

The red light creates red flashes which the coyotes mistake for predator’s eyes and will therefore keep off.

Installing cat posts in the yard can protect both feral and domestic cats from coyotes.

This is especially important if you don’t have trees in your yard.

The post should be 10-15 feet from the ground to give your cat easy access while at the same keeping predators at bay.

Fencing your property works in two ways. First, it keeps your cats from wandering away from your yard and it also keeps predators away.

In conclusion, your cat cannot outrun a coyote. It is upon you to take precautionary measures to keep your kitty safe.

Use a fence, install cat posts or use red led lights. But the surest way of keeping your cats safe is to keep them indoors, especially when you are not around.