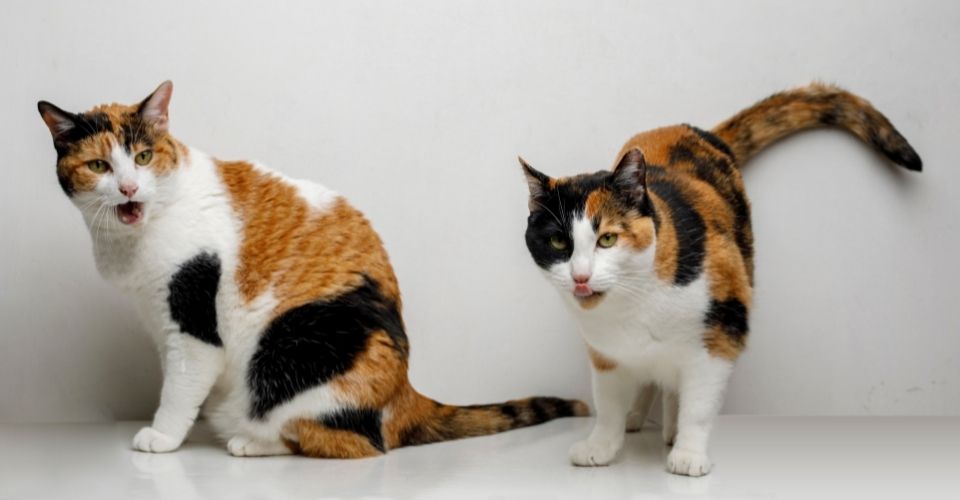 With their gorgeous tri-colored coats in black, white, and orange hues, calicos are some of the most adorable cat breeds.

For one, very few felines have three colors on their coats. The only other pattern is the infamous tortoiseshell cats or torties.

Secondly, calicos are extremely rare. If you own one, she will always turn heads wherever she goes.

Although the pattern has little effect on the personality of the cat, some people believe that these beauties are warm, loyal, smart, loyal, and downright sweet.

In the spirit of helping you learn more about this legendary cat color, we have put together a guide explaining whether female calicos are sterile or not.

Whether you are a breeder looking for some insight in breeding your calico or just want to expand your feline knowledge, we have got you covered.

To some people, the term Calico refers to a specific cat breed. Well, this is not true.

The fact is that calico is a coat color rather than a breed. A cat with this color presents with three different colors on her skin – mostly white, black, and orange.

However, some kitties also have other color variations including blue-black, cream, brown, and reddish.

The name Calico is derived from a specific cloth that was once imported from India and Europe. The color resembles this specific fabric.

Calicos are commonly mistaken for tortoiseshell cats as both cats bear the same colors.

However, what distinguishes them is that the former is mostly white while the latter is mostly brownish with almost no white.

Also, Torties have streaked colors rather than patches which is the case with Calicos.

The cat breeds with the calico coat color include the Japanese Bobtail, American shorthair, Persian, Cornish Rex, and Maine coon, among others.

How Do Calicos Come About?

The color of a cat’s coat is based on her specific melanin type.

Cats are predominantly black unless they inherit a sex-linked masking gene which we know as orange or red as it is scientifically referred to.

This gene is carried in the X chromosome. Other colors and patterns come about as a result of other modifying factors such as polygenes and genes.

A dilute gene, for instance, changes the color of a cat from black to blue.

Selective breeding controls how these polygenes and genes play out.

For a calico cat, the coloration is a result of the presence of two X chromosomes in each sex gene.

One gives the orange coloration while another X chromosome is black or brown.

One of the chromosomes is inactivated in each cell during embryo development, a process called Lyonization.

Two such chromosomes are needed for a kitty to have a tri-colored coat.

Female cats have two chromosomes received from each of their parents.

Males, on the other hand, only have one X chromosome and one chromosome. This is the very reason most calicos are female.

Speaking of calicos being mostly female, research suggests that 99.8% of these beauties are girls.

The reason as explained above is that females have two X chromosomes while males only have one.

If you can recall, a cat needs two X chromosomes to qualify as a calico. Naturally, this equation throws the males out of the window.

However, it is not at all impossible for a calico to be male. One in every three thousand calicos is a male.

Sometimes, male calicos inherit two X chromosomes from their parents. This occurs when one chromosome from either parent is split into two. That means they are born having an XXY sequence making them calicos.

Sadly, male calicos are sterile. Males are supposed to have a normal chromosomal sequence of XY.

XXY is abnormal and not ideal for breeding. So, yeah, all-male calicos are studs.

They do mate but cannot reproduce. Besides being sterile, these cats are also at a higher risk for Klinefelter syndrome which causes a shortened lifespan, bone fragility, higher body fat, and behavioral issues.

Because of their male counterparts being sterile, many people also believe that female calicos also follow suit.

Well, we’ll have you know that females are indeed fertile. If left intact, they can reproduce as many times as other cat colorings.

Female calicos have the usual X and Y chromosomes meaning they operate like other normal cats with regards to reproduction.

The resulting litter may not all have the calico pattern. In fact, oftentimes, you will get a mixture of differently-colored cats.

To get a calico kitten, the calico mother will have to pass her awesome tri-color genes.

One of the chromosomes must carry the orange gene while another one carries the black gene.

If both mom and dad pass on X chromosomes carrying the black gene, the kitten will be black and not a calico.

The genetics around what really happens in the cell can be complicated but the summary of it is that a female calico can and does give birth.

Researchers started looking into the breeding of calico cats as far back as the 1940s.

Even after all the vast discoveries of these amazing kitties, more studies are ongoing to know how the coloring happens exactly.

For instance, why is it that some Calicos have very few black patches while others have more of them?

Or why are other Calicos predominantly white, black, and orange while others have other colors on their bodies?

Studies on the breeding of more female calicos will help shed more light on these questions.

Who knows, perhaps soon we will have a way to selectively breed calico cats and predict how many of the litter will be calicos.

Heck, we may soon find a way to reverse infertility in male calicos.

Are female calico cats sterile? The answer is a thundering no.

These cuties have all it takes to conceive, carry pregnancy, and give birth to healthy kittens.

With their male counterparts being sterile, these beauties are tasked with the responsibility of keeping the calico gene going. We could be more proud of them.