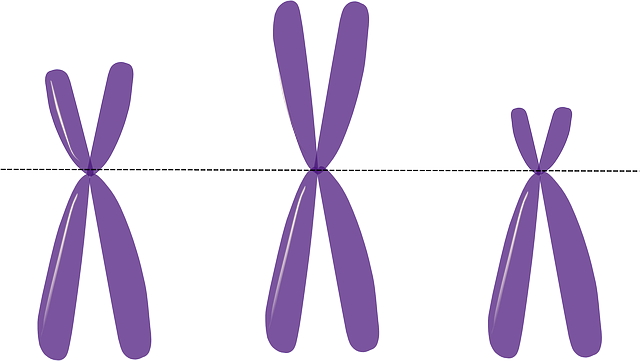 Genetics is a hot topic these days, with even the average person getting hooked to DNA crime stories in the movies.

So as a cat lover, you must be curious about the genetic secrets that could explain your cat’s adorable features.

For example, how many chromosomes do cats have and what do they have to do with a cat’s legendary cuteness?

This should leave you wondering: where do our beloved feline friends fall?

Chromosomes aren’t exactly a household name but chances are that you have already heard of DNA.

Actually, DNA and chromosomes have a lot to do with each other. They are responsible for heredity or the collection of traits that get passed down from parents to offspring.

Chromosomes are tiny thread-like structures that are densely packaged inside the nucleus of our cells.

They are made of DNA and protein. Chromosomes carry information that acts like the recipe for creating and running the cell.

It is the chromosomes and the DNA they hold that ensure that a cat doesn’t become a dog, a cabbage, or a human being. They are also what give a pet a unique feature as an individual.

Number of Chromosomes in Living Organisms

Each living thing or species has a characteristic chromosome number. So, this can help you identify a species such as a cat, right? Yes, but don’t always bet on it!

For example, which organism has 48 chromosomes? Surprisingly, the answer is either a chimp or potato since both have the same chromosome count!

This should make you suspect that it takes more than just the chromosome number to make an organism.

It is the genes and how their contents are arranged or sequenced on the chromosomes that hold the key. So, what are genes?

How Genes Fit together with Chromosomes

Genes are where the real action takes place when it comes to heredity. Genes are simply sections that lie along the length of the chromosome or DNA.

Each gene codes for a particular protein.  So, every single hereditary trait that a cat has is due to a specific protein. This can be its eye color, its temperament, the size of its muscles, or its ability to taste.

Genes can even code for diseases which happens when the protein they produce is faulty. Some good examples are sickle cell anemia or diabetes.

Bad proteins are usually caused by mutations in the genes. A mutation in a gene in the cat’s taste buds makes them unable to taste sweetness. So, they don’t care for sugary foods or fruits like we do!

Cats, like most mammals, belong to a group called diploid organisms. This simply means that they inherit paired chromosomes, with half of the set coming from each parent.

For the 23rd chromosome which is the sex chromosome, females have 2 copies of chromosomes X and males have an X and Y chromosome.

Polyploids are quite common among plants and are also found among some fishes, frogs, salamanders, and leeches.

To produce new chromosomes, you always have to start with another chromosome that already existed.

By a process of duplication, new chromosomes are produced from the old chromosome. This happens when a cell divides to produce 2 new cells.

The process is called mitosis which is how the non-sexual cells of our bodies multiply.

Two brand new cells with identical chromosome numbers are formed out of the old cells.

So, if you started with one cell having 46 chromosomes (23 pairs), by mitosis you end up with two new cells each with 46 chromosomes.

A second different process called meiosis occurs in the reproduction of sex cells.

So, How Many Chromosomes Do Cats Have?

Most cats have 38 chromosomes. But interestingly, not all cats have this number.

For example, the ocelot species, a South American wildcat, has just 36 chromosomes.

If you breed this cat with other cats having the normal 38 chromosomes, you will wind up with cat offspring with 37 chromosomes.

Only the females in this offspring can go on to reproduce but the males will be sterile.

With 38 chromosomes, the cat shares the same number of chromosomes with creatures that are not cats at all such as:

If all goes well regarding chromosome production, expect to get a normal healthy cat.

However, anomalies can happen and feline experts have found about 250 diseases that can pass down to cat offspring. Many of these look just like human genetic diseases.

Not all anomalies are troublesome though. In fact, some lead to what seems like enhancement in feline beauty which makes them more appealing to cat owners.

Calico cats aren’t a particular breed. They are just cats with specific uniquely colored and patterned coats. So, they can be any cat breed such as a Manx, Main Coon, Siberian, etc.

This feature comes about due to inactivated chromosomes. It’s a process in female cats where one of its X-chromosomes is silenced or suppressed, effectively reducing the number of active chromosomes to 37.

Tortoiseshell cats are often confused with calico cats. They differ from calico cats in that they lack the white color.

What Exactly Is a Torbie Cat?

One of the genes that give a cat its fur color of orange and black is located in the X-chromosome.

Remember that females have two X-chromosomes but males have an X and a Y chromosome.

Since they have two X-chromosomes, females can inherit both orange and black colors together.

However, male cats can get only one of these colors—either orange or black—since they possess just one X chromosome.

Klinefelter syndrome is an unusual situation where male cats can end up having an extra X- chromosome so that they have both orange and black colors like the female calico cats.

This gives the cats an XXY- chromosome resulting in an extra chromosome.

By loyally spending so much time by your side, your cat may pass herself off as a human.

Fortunately, it’s the differences in your chromosomes numbers and their genes that will help tell you apart.

That’s why she has the whiskers, slow lithe movement, and that giveaway purr.

Related Post: How many Hairs are on a Cat?