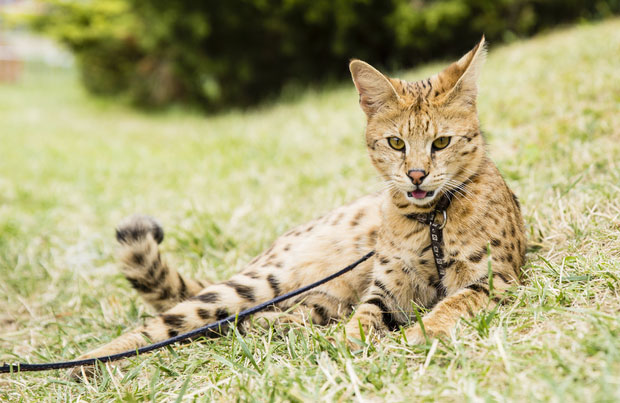 For a long time, owning a Savannah cat was frowned upon. To many, the endeavor was equated to bringing a leopard home.

Despite looking cute, this kitty can bite and scratch like his wild cousins. After all, some of his genes are derived from the wild African Serval cat.

Well, these days savannah cats are domesticated and loved by many. Both experienced and novice cat owners are increasingly adopting savannah cats into their homes.

If you want to join the list of people who have chosen to own an F1 savannah cat, there’s no reason not to.

But first, you should know that this cat is not the easiest to have. His wild DNA is high compared to other savannah cats meaning he has his wild habits and character. On the other hand, he comes with amazing qualities.

In this guide, we will tell you about the good and bad of owning a full-grown F1 savannah cat.

What Is An F1 Savannah Cat?

The former is a medium-sized African feline with a spotted coat and long ears. He also has a circular patch at the back of his long ears.

When it comes to savannah cats, people often get confused about which category is ideal for domestication and which is not. This is because this breed is grouped according to the generation.

All savannah cats are essentially given the Filial designation (F) to identify their proximity to their Serval ancestors.

So, an F1 cat is the first generation which is 50% wild and 50% domestic. That means one parent is a Serval while the other is a domestic cat. This is the closest to her wild ancestors.

F2 is the second generation and signifies a cat whose one grandparent is Serval while both parents are domestic cats.

F3 is the third generation and so on…

Because of its wild side, an F1 savannah cat is not your atypical pet. He retains most of his hunting instincts and may pose a danger to kids and other pets at home.

When afraid or threatened, he will rip your flesh apart. In short, this is a somewhat wild cat that largely belongs to the wild.

Many states and countries have banned owning F1, F2, and F2 savannah cats.

Others have tight laws and regulations around owning these cats. You might want to find out where your state stands before you adopt or buy an F1 savannah cat.

Even if it is mostly wild, a full-grown savannah cat comes with great benefits. These include the following:

An F1 cat is easily recognizable in a room. For one, he is the world’s tallest cat breed according to Guinness World Records.

His height reaches a whopping 19 inches. He easily towers over his mates.

He’s not the smallest either. Male F1 cats weigh as much as 30 pounds.

Average domestic cats range between 5-15 pounds except for the big boys such as Maine Coons, Ragdolls, and Norwegian Forest Cats.

Secondly, with spotted markings across his beautiful coat, this cat resembles a wild cheetah.

His large erect ears also make him stand out.

Savannah cats, in general, are people-oriented cats. The F1 cat is no different. He loves nothing more than spending time with you.

He’s not a lap cat though – he’s too big for that and frankly, he doesn’t enjoy that either.

He mostly likes following you around the house, looking keenly at what you are doing.

Often, he observes you in order to see if he can copy and paste your tasks.

Just make sure he has his independent time because he treasures that too.  When he’s tired, he will come by and offer good company.

Another prized trait of a savannah F1 cat is intelligence. Blame it on the fact that his wild side of the family is smarter than most cats.

Being out there demanded intelligence lest he missed out on prey and also became an easy target for the enemy.

An F1 kitty can be taught much like a dog – walking on a leash, coming when called, responding to commands like, “sit”, “stand”, “come” and more.

He can also play a game of fetch with you if trained early enough.

If you are looking for a cat that will entertain you with his curious and active nature, the F1 savannah cat fits the bill.

This is no laid-back kitty. He will always want to play with you around the house.

If you have kids, he’ll make a great partner as long as you train each party on how to handle the other.

Expect your kitty to climb on top of your kitchen counters, zip around the living room, hunt prey non-stop, and just stay active.

If you are not into active and highly energetic cat breeds, this will be a con for you.

An F1 cat also loves being in the water, unlike his mates who would do everything to be away from it.

For people with bathtubs, this kitty will often join them for a bath. If you have a kiddie pool, he will frequent it. Talk about a swimming partner for life!

An F1 Savannah cat can leap up to a height of 8 feet. That means he can jump to the top of your refrigerator or cabinet in one leap. Your kitchen counters and bottom closets are a piece of cake for him.

To make things worse, this breed of cat is extremely adventurous and mischievous.

He always wants to explore and climb. Plus, he is intelligent and can figure things out with ease.

That means he can reach for food and possessions at home that he shouldn’t come near.

Although this behavior can be tamed to a certain extent during training, parts of it will remain.

Perhaps the biggest con of a savannah cat is its price. This cutie is one of the most expensive out there.

The actual price depends on the filial number, breed standard, and gender.

Because of a higher Serval DNA percentage, F1 cats fetch an even higher price in the market.

There are plenty of reasons why F1 cats are expensive. For one, breeders have to buy at least two quality cats – one of which is a wild Serval cat (these don’t come cheap).

Caging wild cats is also costly and challenging as is feeding them.

After kittens are born, other costs such as vet visits, vaccinations, and medical tests can also pile up pushing their prices above the roof.

Savannah cats haven’t been around for too long. This means they are not as domesticated as ordinary cats.

Most of the time, you’ll have to wing it when it comes to taking care of this animal. You cannot predict when his wild side will spring up.

When it does, knowing what to do is crucial. If you are seasoned in cat ownership or have the guts to deal with such a kitty, go for it.

Else, consider having another cat for now.

As mentioned before, an F1 savannah cat can grow to be 30 pounds and stand at a height of 19 inches. This is no small cat.

For people living in apartments or small houses, this cat may not be the best to own. He needs plenty of vertical space to jump up and down.

F1 savannah cats have sharp hunting instincts. They are always looking for the next thing to kill and eat. These can be rodents, snakes, and other tiny animals.

Unfortunately, your baby, a small cat, or any other small household pet can also fall prey. Training and socialization will tame this behavior to a greater extent.

Owning an F1 savannah cat has its good and bad sides. Your choice will depend on your needs, what you can tolerate, and your general preferences.

Whatever you do, keep in mind that this kitty is not accepted in all countries and states.

Check with your local authorities to find out if you can own one or not.

Also, keep tabs with savannah cat groups and organizations to know more about caring for your kitty.

What to Expect From a Savannah Bengal Cat Mix

Are Savannah Cats Legal In Florida?