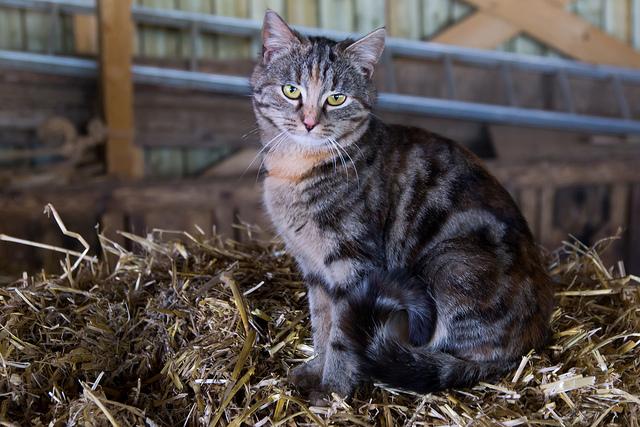 The Korean folklore associates bad spirits and bad luck with cats. For instance, a black cat crossing one’s path was thought of as a sign of impending doom.

Such beliefs may be the reason why cats weren’t very popular in the country back in the day.

However, in recent years, the perception of cats has changed and they are now considered good luck charms.

There are many reasons for this change in perception—one of which is the increasing popularity of Korean dramas that feature cats. The popularity of cats on the internet may be another factor.

Traditionally, dogs were the most popular pets in Korea, but cats are quickly gaining ground.

In fact, according to a recent survey, almost 28% of respondents said they owned a cat.

There are even popular cafes dedicated to cats, where customers can relax and enjoy the company of these furry friends.

Because cats were traditionally associated with evil, there weren’t many breeders who went out of their way to come up with unique cat breeds for Korea. This might be one of the reasons why we do not have so many Korean cat breeds.

Let’s have a look at each of these breeds in more detail.

The Korean Bobtail Cat is a national treasure in Korea, where it has been venerated for centuries.

This beloved breed frequently appears in traditional folklore and art, and it is even said to have once been the exclusive companion of Korean royalty.

There are lots of theories that explain the origins of the Korean Bobtail cat but the most popular postulates that the cat was first bred in Korea 1,000 years ago.

Around that time, the country had a widespread rodent infestation that was a huge threat to the silkworm population.

As such, it was agreed that all cats be set free to roam the streets as a way of dealing with the rodent problem.

It was also made illegal to either sell or buy cats and so the Korean Bobtails roamed freely on the streets and on farms. This is believed to be the time when the numbers grew exponentially in Korea.

Today, the Korean Bobtail Cat is still cherished by many Koreans, who view it as a symbol of good luck and prosperity.

While the breed is relatively rare outside of Korea, its popularity is steadily growing in other parts of the world.

Thanks to its unique appearance and friendly personality, the Korean Bobtail Cat is truly a one-of-a-kind pet.

In addition to its unique tail, the Korean Bobtail may also come in a variety of colors.

However, white calicoes seem to be the most popular coloration. This preference is not only visible in choices of cat fanciers but also in folklore. That said, almost any other coloration is accepted by breed standards.

The breed’s tri-color pattern (termed a “tortoiseshell-and-white” or “calico” in North America, and a “tricolor” or “torbie” elsewhere) is particularly popular, with cats of this type often considered lucky charms in Korea.

Cats with pointed coloration (siamese markings) are not favored by the breed standard, though such cats are still seen occasionally.

The Korean Bobtail cat breed is renowned for being both exceptionally affectionate and loving. This makes them particularly well-suited as companions, and they are truly devoted to their human owners.

In addition to being loving and sweet, these cats are also highly protective and tend to be very loyal.

They are quick to sense danger and will often go out of their way to keep their humans safe from harm.

Whether it’s cuddling up on the couch or alerting you to someone at the door, the Korean Bobtail cat makes a wonderful companion and is truly one of the most endearing cat breeds out there.

So, if you’re in search of a feline friend who will shower you with love and affection, look no further than this sweet, loyal breed of cat!

The Koshot cat is a beloved symbol of Korean heritage and culture.

Dating back to the 8th century, these cats have long been depicted in art, pottery, and even folklore.

They are known for their distinctive long fur, bright blue eyes, and quiet demeanor. This mixed-breed feline is thought to have been derived from a variety of different breeds, both local and imported.

Because there have been no genetic studies done on the Koshot, it is not clear exactly which breeds contributed to its creation or what its exact ancestry might be.

Despite this lack of knowledge about the origins of the Koshot cat, these felines continue to live and thrive in Korea today.

While there may not be official records or regulations concerning this breed, they are still adored by many people for their charming personalities and distinctive appearance.

With their striking markings and curious nature, the Koshot is truly a beloved part of Korean culture.

So, even if we don’t know all the details about their history or genetics, one thing is certain: The Koshot will always be cherished as an iconic symbol of Korea.

Korean street cats come in all shapes and sizes. They may have short or kinked tails, and they may be of any color or pattern.

Male street cats may have thick necks, muscular bodies, and scars from fighting. This cat breed is also known for its strong odor which might be a turn-off for some people.

Korean street cats do not follow a breed standard, so any combination of features is genetically possible.

Some experts believe that street cats from Korea contributed to the Japanese Bobtail breed.

This breed of cats is typically clean and well-groomed, thanks to their meticulous self-grooming.

They also tend to be cautious around people, and they seldom make eye contact.

These behaviors are signs that the cat is acclimated to life on the streets. Cats who are lost or newly homeless typically do not display these behaviors.

If you’re looking for a new pet, consider adopting a Korean street cat.

You’ll be giving a deserving animal a loving home, and you’ll be getting a loyal and affectionate companion in return.

The Japanese bobtail has been around for centuries and is thought to be one of the oldest natural breeds in existence.

Despite the name, this cat actually originates from Korea and not Japan, where it is known as the ‘Songi’, meaning pomegranate tail.

This cat breed has a naturally occurring mutation that causes the tail to have an appearance resembling a bobbed tail.

It is not clear how a Korean cat was named after Japan but one of the popular theories suggests that when US troops were stationed in Korea during the Korean War, they came into contact with the bobtailed cats and brought them back to the States where they were erroneously named Japanese bobtails.

The breed was first introduced to Europe in 1968 and later gained recognition from The International Cat Association (TICA) in 1979.

Japanese bobtails come in a wide variety of colors and patterns, including tabby, tortoiseshell, calico, and solid colors.

They are medium-sized cats with a slim build and long legs. The head is triangular-shaped with large pointed ears.

Japanese bobtails are active, playful cats that enjoy interacting with their human companions.

They are intelligent cats that are quick learners and can be easily trained to perform tricks.

They are also known for their vocal nature and will chirp, trill, and make other unique sounds to communicate with their humans.

If you are looking for a unique and beautiful cat breed that is also intelligent and playful, the Japanese bobtail is a perfect choice!

Even though cats weren’t very popular in Korea in the distant past, they still formed an important part of their culture.

For instance, cats were instrumental in dealing with the rodent problem that was threatening the silkworm population over 1,000 years ago.

Today, cats are increasingly being accepted as pets in the country and the Korean cat breeds (Korean Bobtail Cats, Korean Shorthair Cats, Japanese bobtails, and Korean street cats.) have also been exported to America and other parts of the world.