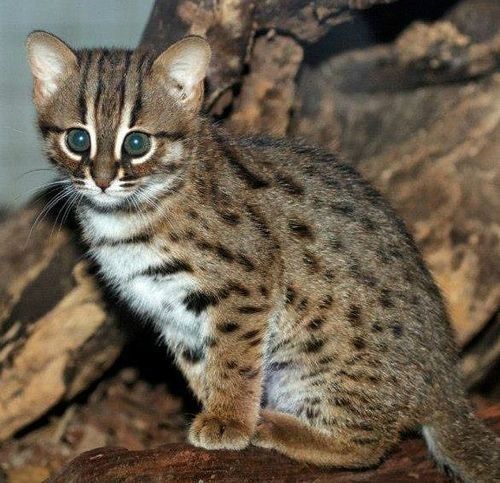 The rusty-spotted cat is the smallest cat in the world and has even been nicknamed the hummingbird of the cat family. This cute little cat is so tiny that it can fit in your palm.

The rusty-spotted cat almost looks like a miniature leopard. It has dark streaks running along both cheeks and elongated spots on its coat – just like a leopard.

These small cats weigh anything from 2 to 4 pounds and are about 20 inches in length.

Rusty-spotted cats are primarily wild cats native to Asia and believed to be restricted to the region but they have also been spotted in Nepal at the Bardia National Park.

Wild cats reside in rain forests but they can also thrive in scrublands, woodland savannahs, and bamboo forests.

Because of their striking beauty and unique size, lots of pet parents are considering owning them.

In this post, we will investigate the issues around owning these kitties, including the legal environment. Keep reading to find out more!

There is no simple answer to this but in a nutshell, it depends on what the law says about exotic animals in your region.

In some areas, it is okay to own exotic animals while some regions may have laws barring it.

So, the best way to know for sure is to check your local fish and game organization to understand what the government has to say about owning a rusty-spotted cat.

Is It Legal To Own A Rusty-Spotted Cat?

Well, it depends on where you live. In the United States of America, each state has its legislation or lack therefore that will determine the legality of owning a rusty-spotted cat.

Some states like Michigan and Alabama do not place any restrictions on owning rusty-spotted cats or any other exotic animals.

Other states, like Indiana, require you to have a permit that you will renew annually for you to own the cat.

In other regions, ownership of wild cat species is prohibited and controlled.

For instance, New Hampshire restricts rusty-cat ownership with an exception of those who have a state exhibitor permit.

So, you will want to check with your state and local regulations to find out if you can own a rusty-spotted cat or not.

As aforementioned, you should find the information you need from the relevant game and fish government body in your state.

The legislative framework in the UK is a bit different because it allows for ownership of rusty-spotted cats.

As such, no special license will be required. Even though this cat is listed as dangerous and wild, it is perhaps considered safe because of its tiny size.

Things are however a bit different for the rest of Europe where the legality of owning the rusty-spotted cat will depend on the region.

Countries in Eastern Europe have a more relaxed legal framework that allows citizens to own the cat.

However, most Northern-European countries have stringent rules and restrictions on ownership of this cat.

But there is always an exception, so it is best to check the regulations in the specific country just to be sure you are not violating the law.

Is It Morally Right To Own A Rusty-Spotted Cat?

Now that we have answered the question of legality, it is also important to consider the morality of owning this cat.

If you think about it, it might not be morally right to own a rusty-spotted cat as a pet.

For starters, this is a wild-cat species, and all wild animals are best left to thrive in their natural habitat.

However, one may argue that even domesticated cats were wild at some point and that is a fair point.

But then you have to remember that it has taken thousands of years for us to domesticate the cats we keep in our homes.

Even though the rusty-spotted cat is small, it is still a wild animal that is given to wild tendencies.

There is a good chance the cat will eventually be unbearable in a domestic setting and you may have to take a drastic measure like euthanizing him.

So, one may argue that it is morally wrong to own this cat. Besides, there are millions of abandoned and homeless cats in shelters who need adoption.

Instead of going for an exotic breed that might bring you problems, why not get an adorable kitty from one of the shelters near you?

How Much Does A Rusty-Spotted Cat Cost?

The rusty-spotted cat is one of the rarest cats in the world.

The IUCN recently placed this specie on the red list because its populations are on a sharp decline and it is now an endangered species.

As such, it will cost an arm and a leg to acquire it. This cat, which is native to Sri Lanka and India can go for up to $20,000 – and that is not factoring in other costs like food, toys, and medication.

Rusty-spotted cats are small and cute but they are ravenous and fierce hunters.

Even though it’s tiny in body, this feline has the spirit and heart of a lion.

One of the earliest persons recorded to have domesticated this cat in the 19th century reports how destructive this little angle turned out to be.

He would hunt for tree squirrels around the house and create a huge mess while at it.

One time when introduced to a gazelle, the miniature leopard jumped on the gazelle’s neck and would not let go – until he was pulled away.

Based on these reports, it can be safe to infer that this cat could be dangerous for other pets and children.

The rusty-spotted cat is indeed unique—small enough to fit in your hands but has the attitude of a lion.

With its beautiful spotted coat, this feline can be so tempting to own, especially if your local jurisdiction has nothing against owning exotic animals.

But this little cat can be a handful and may not necessarily be the best pet for your family.

Besides, rusty-spotted cats are endangered and it is better to allow them to thrive in the wild which is their natural habitat.