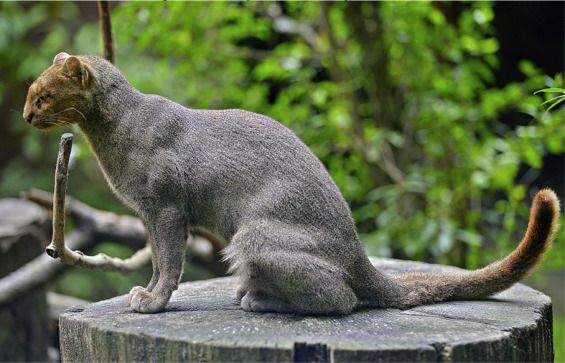 Jaguarundi is a wild cat that hails from the Americas and can be found throughout both South and Central America and Northern Mexico.

Jaguarundi cats are slender and medium-sized with short legs, small heads, and an elongated body.

They typically have uniform coloration with grey and red color morphs.

Jaguarundis are just as big as most domestic cats. They grow to an average of 10-24 inches in height and 3-4.5 feet long from the nose to their tail tip.

An adult jaguarundi can weigh anything from 12 to 18 pounds.

These cats can breed throughout the year and have a gestation period of approximately 75 days.

Their kittens are born with spots that eventually disappear as the cat grows older. The mother weans her kitties after a month and starts to teach them to hunt.

It is believed that these cats were tamed by the Central American natives to help them in dealing with rodents in the villages.

Such reports have made cat lovers wonder if they could do what their ancestors did and domesticate this wild cat.

In this post, we will answer this and other related questions, so keep reading to be in know!

Why You Can’t Keep Jaguarundis as Pets

Even though some people have attempted to tame these cats, it is not a good idea to try it.

Jaguarundis are dangerous wild cats. Out in the wild, these cats are used to hunting rodents, armadillos, rabbits, quail, opossums, turkey, fish, frogs, and all kinds of reptiles.

Those that live near domestic settlements also venture to their neighbors to hunt poultry.

Taming this hunting instinct is not easy. While it is true that all domestic cats were once wild, it has taken us thousands of years of breeding to end up with friendly and easy-to-maintain domestic cats.

Taming wild species is also not a good idea because it can interfere with their circle of life.

Some states like Florida prohibit the ownership of exotic breeds because they pose a threat to the native species.

Most wild animals are adapted to dealing with harsh conditions and would easily thrive in a domesticated setup, which may mean the domesticated species would suffer (if the two were to compete for the same resources).

This may sound like an exaggeration when you are only looking to tame a single cat but if you think of the cumulative effect of lots of households doing the same, then it can begin to make sense.

Like most wild cats, the Jaguarundis are nocturnal animals because that is when they have an advantage over their prey.

However, they still move around during the day when they are not sleeping.

These are solitary animals that only socialize when looking to mate. They are also very talkative cats and they have at least 13 different vocalizations.

Jaguarundis are also great climbers and swimmers which comes in handy when hunting for different types of prey.

The Jaguarundi was listed as an endangered species in the US in 1976.

There is no evidence that Jaguarundis are targeted for trade or any other reason.

However, it is believed that these cats are caught by mistake in traps that hunters set for other species that are considered commercially viable.

Also, these cats are very notorious for hunting domestic poultry and so farmers might also target them.

But perhaps the main reason why their numbers may be in decline is due to their habitat destruction by human activity.

In some regions, this incredible cat is already extinct. For instance, there are no more Jaguarundis in all of Texas.

According to the Texan government, this species is now officially extinct since the last sighting of the cat was in 1986.

As such, these cats are incredibly rare and it would be immoral to think of owning one even if you found it.

When an animal is endangered, its ownership should only be left to the government and relevant conservation agencies that will put in place measures to preserve the species.

Are Jaguar and Jaguarundi the Same?

Both the jaguar and jaguarondi are in the Felidae family but they are not the same cat.

For starters, jaguarundis are small cats – almost comparable in size to domestic cats – while jaguars can grow to weigh 300 lbs.

So, don’t let the similarity in the name fool you. In fact, experts believe that the Jaguarundi is more similar to the cougar than to the Jaguar.

Also, even though both Jaguars and Jaguarundi are endangered species, the jaguar faces a huger threat.

If you are thinking of keeping a jaguarundi as a pet, think again.

These cats are wild and can pose a threat to your children and other pets.

Additionally, they are an endangered species that are already extinct in Texas and other regions.

There are lots of other alternative exotic breeds that you can consider instead but be sure to check your local regulations to make sure you aren’t violating any laws.