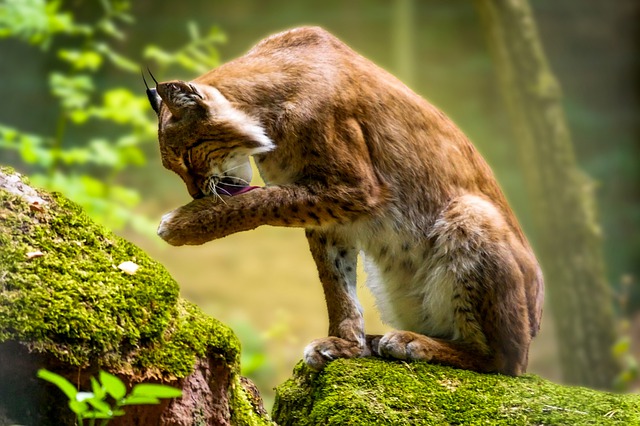 The Eurasian lynx is the biggest of the four lynx cats and as the name suggests, this cat hails from Europe although it can also be found in Siberian and Central Asian forests.

The Canadian lynx is native to North America and thrives in tundra and forest regions across Canada, Alaska, and some other regions in the United States.

Iberian lynxes are an endangered species that hail from Southern Europe in the Iberian Peninsula.

The Bobcat is a North African wild cat that has at least 13 known subspecies. It is common in the Northern parts of Mexico, the Continental United States as well as the Southern parts of Canada.

Because of their beauty, Lynxes are increasingly in popularity and lots of pet parents want to own them. But these are exotic animals and some states prohibit their ownership.

So, where does California stand on this? Can you own a lynx in California?

Well, the simple answer is no. California law prohibits the ownership of any exotic pet and the state does not issue any special license for exotic pets.

Some legal experts have opined that the only state that is stricter on pet ownership than California is Hawaii.

Why Does The Law Prohibit Owning Exotic Animals In California?

As a pet parent who lives in California, it might not make sense why the government doesn’t allow you to own a Lynx cat while other parents in other states are allowed to.

So, why exactly is ownership of a lynx cat considered illegal in California?

Let’s have a look at some of the reasons why below:

The California Department of Fish and Wildlife sets in place regulations that are meant to protect the natural resources in the region.

This is the only surefire way of ensuring native species are protected from extinction.

When you introduce a new species to a new environment, the law of natural selection usually comes into play – especially if they are competing for the same resources with a native animal.

As an example, experts believe that birds are now on a sharp decline due to the increasing population of free-roaming domestic cats.

As such, authorities regulate or even prohibit the introduction of exotic species if they knew species are believed to cause a significant threat to the native wildlife.

Lynx cats are wild and they might be dangerous to other animals and children in the household.

That’s because these cats are naturally adapted to be ferocious hunters and will hunt any small animal that they perceive as prey.

These animals are also accustomed to defending themselves from predators and their instincts can kick in when they feel threatened. This might lead to the injury of their human owners or other pets.

The government usually restricts the ownership of any pet that might pose a threat to humans and other animals and this might explain why lynx cats are banned in California.

At some point, the Iberian lynx was the most endangered cat in the world.

One way of protecting endangered species from extinction is to protect them for purposes of conservation and research.

This means that individual ownership of protected animals is not allowed and only government and licensed bodies that are working towards preserving the species are allowed to own them.

This is exactly what was done for the Iberian lynx. A concerted effort by governments and relevant bodies managed to save this cat from extinction.

Most jurisdictions continue to hold the ban as a way of ensuring the longevity of this endangered species.

The California Department of Fish and Wildlife has a lot on its plate.

They have to ensure regulations are followed and they have to monitor the millions of species in the region to make sure all is well.

Due to the financial constraints and limited human resources, the CDFW is not willing to authorize any new exotic breeds unless there is an independent scientific study that confirms the exotic breed will pose no threat to the native species.

If you want to own a lynx cat in California, you are not in luck because it is considered illegal.

But even though the law bans the ownership of exotic cats and other animals in California, the law doesn’t prohibit ownership of hybrids.

For instance, it is legal to own the offspring of an exotic breed with that of a breed that is legal in the region.

So, the closest you can get to owning a lynx legally is to get a hybrid of a lynx and a domestic cat.

Just make sure you are getting one from a reputable breeder who will do everything per the book.