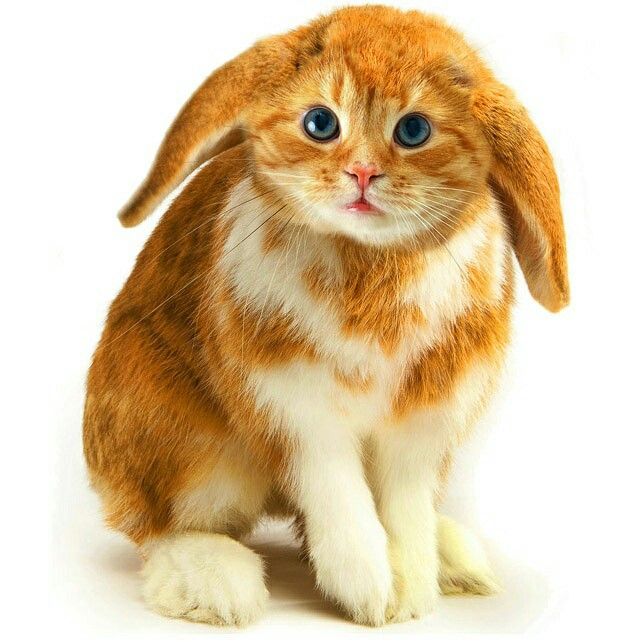 Unusual pairings in animals have always attracted lots of interest—and one such pairing is the cat and rabbit (cabbit).

One has to agree that a cabbit would be a really cute pet since it would combine the best traits from both species.

Who wouldn’t want a cat that has the soft fur and bright eyes of a rabbit with the curiosity and friendliness of a cat?

In this post, we will seek to understand the possibility of creating a cabbit. We will also investigate early sightings of cabbits to establish if the claims can be substantiated.

So, keep reading to find out everything there is to know about the cat-rabbit hybrid.

Can A Rabbit And Cat Mix To Form A Cabbit?

This question has been studied by experts and the conclusive answer is No, rabbits and cats cannot mate because the two species are too dissimilar.

Writing for the Chicago Tribune, Veterinarian Dr. Erwin David made it clear that a cat couldn’t impregnate a rabbit.

Granted, scientists have studied hybrid animals in a bid to understand the possibility of different species mating.

Such studies have established that while animals of different species can mate to form an offspring of unique attributes from both species, some species are just too dissimilar to mate.

Here are a couple of good reasons why rabbits and cats can’t mate:

For two species to breed, they must have a similar reproductive system.

Every specie has a unique reproductive system and cycle and it would almost be impossible for systems that are dissimilar to function together.

In fact, animals in the wild wouldn’t even consider breeding with another animal that doesn’t have a similar reproductive system.

There are lots of important differences between the reproduction of cats and rabbits.

For instance, cats are referred to as induced ovulators which means that the release of eggs from their ovaries is stimulated by the act of mating.

This is why cats will need to mate 3-4 times in a day for the egg to be fertilized. Learn more here: Do Cats Get Pregnant Every Time They Mate?

Although female rabbits also only produce an egg after mating a male rabbit, they are fertile for only 3 days in a month.

With all these differences in the reproductive system of cats and rabbits, it would not be possible for them to mate.

2. They Are Dissimilar Species

Scientists believe that the interbreeding of different species is a necessary evolutionary step in the preservation of life.

However, it is a fact that not all species can interbreed. Only species that are closely related genetically can mate and produce viable offspring.

But even then, there is the chance of producing an offspring that can’t reproduce (like is the case with mules which is a result of a horse and donkey mating.)

While rabbits might have lots of similar traits to some cats, the two animals are quite dissimilar genetically.

Rabbits are herbivores while cats are carnivores. Out in the wild, cats would readily hunt rabbits for dinner.

Consequently, rabbits have an instinct to be afraid of cats while cats look at rabbits as a meal rather than as a mating partner.

Besides, rabbits usually engage in chasing one another before mating. This is a way of ensuring the mating is consensual.

But if a cat were to chase a rabbit, the rabbit may not interpret it as a mating call but will rather think it’s being hunted.

Additionally, the offspring of a cat and a rabbit would not be possible because of the diet issue.

For a hybrid to be possible, the mother and father need to have the same kind of diet.

In this case, cats are carnivorous animals while rabbits are herbivorous animals. The digestive systems of the two animals are therefore very dissimilar.

Suffice to say that these species are too dissimilar to mate.

What about the Cabbit Sightings?

We have established that cats and rabbits cannot mate—and if this is the case, then how come there have been some supposed sightings of cabbits even in the wild?

Well, since cabbits are not biologically possible, there are only two possible explanations for such sightings – they are hoaxes or they are a simple case of mistaken identity.

Joseph Train (Castle Douglas, Scotland) was the first historian to document a cabbit that he saw on the Isle of Man in 1845.

But experts believe that what Joseph Train actually saw was the Manx cat breed. This cat has a round rump with forelegs that are shorter than its hind legs. This gives it a rabbit-like posture and gait.

They may also have a short curled tail that might resemble that of a rabbit.

One can argue that the Manx has the rear of an eastern rabbit and the front of a domestic cat but that’s all there is to it and there is no gene mix between the two species.

Manga, Japanese anime, and other fictional stories have also popularized the cabbit to the point that some believe it is possible.

But that should be treated just like that—fantasy. Because in the real world, a cabbit is not even remotely possible.

As we have established, the cabbit (a rabbit and cat mix) is not possible. The two species are just too dissimilar to breed and produce offspring.

Even though some people are convinced they have seen a cabbit in real life, they most likely just saw the Manx which is a cat breed that has lots of physical attributes that resemble the rabbit.

The cabbit may also be popularized by Japanese anime and manga but this is just good fiction that should be viewed as nothing more than entertainment.

Related Post: Has There Ever Been A Dog And Cat Mix Breed?