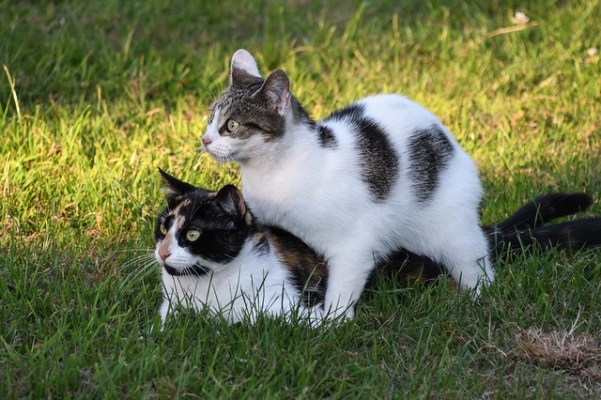 If your female cat hasn’t yet been spayed, soon, she will be on heat.

And when that happens, she will go to great lengths to find a tomcat – and if you’re not careful, she’ll find one, and they will mate.

Before you know it, the queen will get pregnant.

A few months down the line, you’ll have a bundle of kittens in your home.

Sure, the kitties are always adorable, but this may not be part of your plan.

But then again, do cats get pregnant every time they mate?

Contrary to what most owners believe, cats don’t get pregnant every time they mate.

So, if you find your kitty in the act, don’t automatically assume that she will get pregnant.

Here are some of the main reasons why:

1. It May Take Several Matings To Stimulate Ovulation

Many animals already have eggs in situ when mating occurs. However, cats are different: they don’t release eggs (ovulate) into the fallopian tubes for fertilization until they have mated.

This means that for the cat’s eggs to be fertilized, they must be released into the fallopian tubes and into the horns of the uterus—and the stimulus is mating.

Unfortunately, this may not happen in one mating—it takes several matings for the stimulation to happen.

Consequently, the queen may mate even 10-20 times a day and with several tomcats over a period of 4-6 days for the stimulation to occur.

The extended period of receptiveness provides the queen a chance to ovulate—and perhaps choose the best tomcat (with the most desired features).

There are cases when your cat will mate but doesn’t become pregnant.

Also called pseudo-pregnancy, pseudocyesis, or phantom pregnancy, the queen will show signs of pregnancy like gaining weight and milk production, but won’t have any kittens.

She’ll have to wait for the next time she is on heat to try again.

Hormonal imbalance is thought to be the main contributing factor to the development of false pregnancy in cats.

Finally, a queen may successfully mate with a fertile tomcat but still fail to get pregnant due to infertility issues.

Infertility in intact female cats is caused by numerous factors, including:

How Many Times Do Female Cats Mate?

First things first, let’s answer this frequently asked question: How many times does a cat have to mate to get pregnant?

As we’ve seen in the previous section, several matings are needed to stimulate ovulation.

In other words, a single mating may not get your cat pregnant.

Having addressed that, let’s switch gear to the main question: how many times do female cats mate?

And she doesn’t play hard-to-get either—she can do it with multiple toms within a single day. In one full cycle, a queen can meet up to 50 male cats.

Another thing to note is that cats can go into heat multiple times a year. This is because they are ‘seasonally polyestrous,’ meaning they undergo repeated estrous cycles in a breeding season.

A cat’s breeding season is dependent on temperature. A cat that is housed indoors or one living in tropical regions can breed all through a year until she gets a male cat and becomes pregnant.

In contrast, cats in the Northern Hemisphere typically cycle from January to the late fall.

How to Tell if Your Cat is Pregnant

One day is enough for the eggs to be fertilized, and just like that, your fluffy is a soon-to-be mom.

There are different signs you can look out for to tell if your cat is pregnant. These include:

How to Tell If a Nursing Cat Is Pregnant Again

How to Tell If Cat Mating Was Successful

Can a Litter of Kittens Have Multiple Fathers?

You’ve probably seen a litter of kittens with all different colors, and some are long-haired, while others are short-haired.

If you thought all these kittens had the same father, you might need to reconsider.

The truth is; kitten siblings can have the same mother but different fathers. Yes! And that process is called superfecundation.

When a queen is on heat, she breeds multiple times with different toms.

In the process of mating, her eggs are released from the ovaries, and the male’s sperm trapped in her reproductive tract can fertilize them.

Also, the eggs have a lifespan of up to 24 hours, and therefore, if she has released several eggs, there will be multiple fertilizations from the different toms she mates with.

If she mates with same-breed toms, it can be extremely difficult to ascertain whether superfecundation has taken place. This is because the kittens born will share similar or almost-similar physical characteristics.

The most common indication that superfecundation has happened is when the kittens have varied physical characteristics, coat colors, and sizes.

If the kitties look completely different, that’s a good sign that the mom has multiple baby daddies.

Having said that, it’s also possible for kittens to look completely different and still have the same father.

This is because cats have dominant and recessive genes, which would result in kittens of the same father having varied physical characteristics.

Basically, only a DNA test can tell you the truth for sure.

How Often Does a Litter of Kittens Have Different Fathers?

So, the next time you want to adopt two or more kittens from one litter, you should be open to the idea that they might not have the same father.

Actually, this isn’t a bad thing, as you have the privilege of having siblings with different but beautiful physical characteristics.

So, do cats get pregnant every time they mate? No. Mating in cats doesn’t always lead to pregnancy.

But mating results in ovulation, and in one day, the eggs could get fertilized.

If you don’t want your cat to get pregnant, the only sure way to achieve that is to have them spayed.

So, it’s recommendable you get them spayed in the fourth month.

If you want your female cat to bear kittens at some point, but think they are too young, let them stay indoors and keep them away from frisky toms as much as possible.