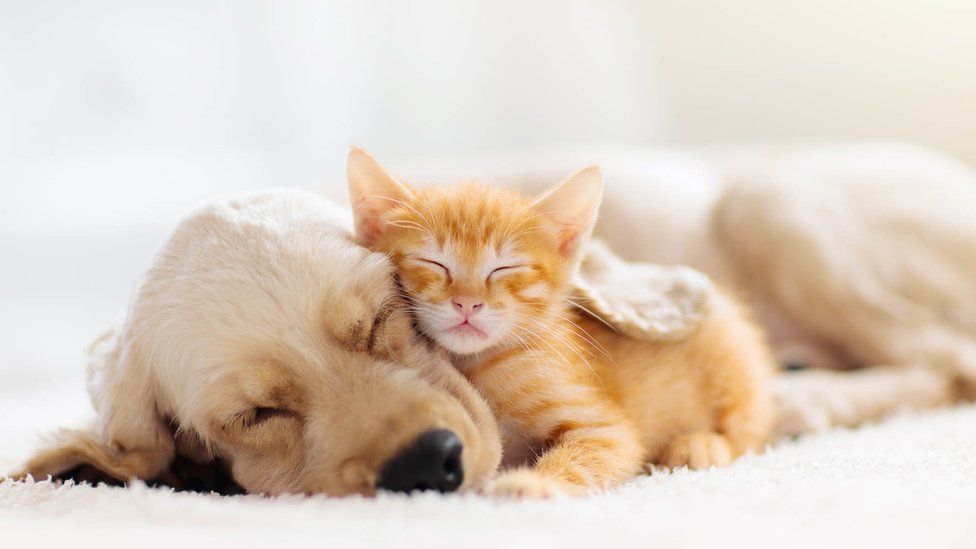 Interspecies mating is anything but new. For instance, we have ligers (a mix of a lion and a tiger) and mules (a mix of a donkey and a horse). But what about dogs and cats? Can they mate?

This question has sparked a lot of interest among scientists and pet lovers alike for years. And there seem to be theories on both sides of the spectrum but at the end of the day, only what is scientifically possible can go.

In this post, we will look into the annals of history to find out if there ever has been a dog and a cat mix and also look at the scientific angle of this possibility. So let’s jump right in!

Can A Dog And A Cat Mix?

Well, the answer is No. Dogs and cats cannot mate because the two species are too dissimilar.

When two species mate, the resultant DNA needs to be close enough for them to work.

But if the DNA sequence is too different, mating cannot happen. For instance, a dog might breed with a wolf because their DNA is somewhat similar but a cat and a dog mix is just not possible.

That said, there have been lots of reports of people who have successfully mated cats and dogs throughout history.

For the most part, these are just hoaxes but they have still elicited lots of interest.

Here is  a quick overview of some of these reports:

Over the years, there have been reports of people seeing or owning what appeared to be a mix between a dog and a cat, or what is fondly referred to as a kuppy.

In 1970, there were reports that a British Pet store owner by the name of Tutt had successfully mated a cat and a dog.

Tutt had run an ad in the newspaper announcing his achievement and was inviting offers.

As fate would have it, his story became a sensation and attracted lots of media attention including Reuters and other international media who wanted to witness the first person to achieve what was scientifically impossible.

All kinds of names were invented by reporters who were covering the story including kuppies, cogs, puppy-cat, pussy pooch, dats, dog-cats, etc.

According to the story, Tutt had been attempting to mate cats and dogs for 10 years before his eventual breakthrough.

He had reportedly been feeding his cats and dogs a mixture of dog and cat food. The kuppy in question had a cat’s whiskers, legs, and fur but the head was a dog’s.

But this wasn’t the first story of a cat and a dog mixing to produce offspring.

Vets immediately rubbished the story and this was further corroborated by experts who went to examine the kittens.

However, Mom (as Laura was nicknamed) stuck to her version and insisted that in fact, the kitty was a mother of puppies.

A more recent kuppy was reported in 2020 in Vietnam. The owners created a Facebook page for the kuppy and it attracted lots of attention almost immediately with the page garnering thousands of fans. This is, without doubt, the most famous animal in Vietnam!

Users even went ahead to create a Reddit thread where everyone threw in their two cents on the possibility of a cat and a dog mixing.

The most widely accepted theory is that this kuppy was a hybrid of a Hmong dog (a local Vietnamese breed) and a corgi.

But even as fans continue to come up with all kinds of theories concerning the origin of the kuppy, the owner has made it clear that it was infact a dog.

Speaking to Bored Panda, Hai Anh, who is the owner of the puppy reported that the puppy was infact not a kuppy but a mix of a native dog breed with a short-legged dog that is locally referred to as a dingo.

Hai however observed that the dog might have developed a genetic mutation that makes him resemble a corgi mix. Hai Anh bought the puppy in the Mountain province of Vietnam.

What If Cats And Dog Mated?

Cats and dogs cannot mate – but even if they did, they wouldn’t produce offspring.

For different species to mate and reproduce, the parental molecules of the DNA need to be homogenous with each other.

To put it simply, the DNA sequence should be similar. This is not the case for cats and dogs.

Even if scientists were to figure out a way of genetically modifying the DNA to create a hybrid between a cat and a dog, the breed wouldn’t be viable and would probably die shortly after birth.

DNA is usually made of units also known as chromosomes, which are usually in pairs.

A cat usually has 38 chromosomes which are in 19 pairs. On the other hand, dogs have 39 pairs that make up a total of 78 chromosomes. Learn more here: How Many Chromosomes Do Cats Have?

For two different species to reproduce, they need to have the same number of chromosome pairs as is the case with donkeys and horses.

The issue of dogs and cats mating is also far-fetched due to their different mating patterns and habits.

For starters, a female dog and a female cat will go on heat at different times. Additionally, cats and dogs communicate being on heat differently and that may explain why they do not show interest in each other.

On the other hand, a bitch might be harmed by the barbed penis of a cat as they are not adapted for this.

Even though there have been reports of kuppies, there is no scientific evidence that a dog and cat mix is feasible.

As a result, we can treat these reports as hoaxes. Cats and dogs are just too dissimilar to mate.

So, if you see a puppy that resembles a cat, that’s all there is to it—they are not mixed with a kitty in any way.

Related Post: Does A Rabbit And Cat Mix (Cabbit) Exist?