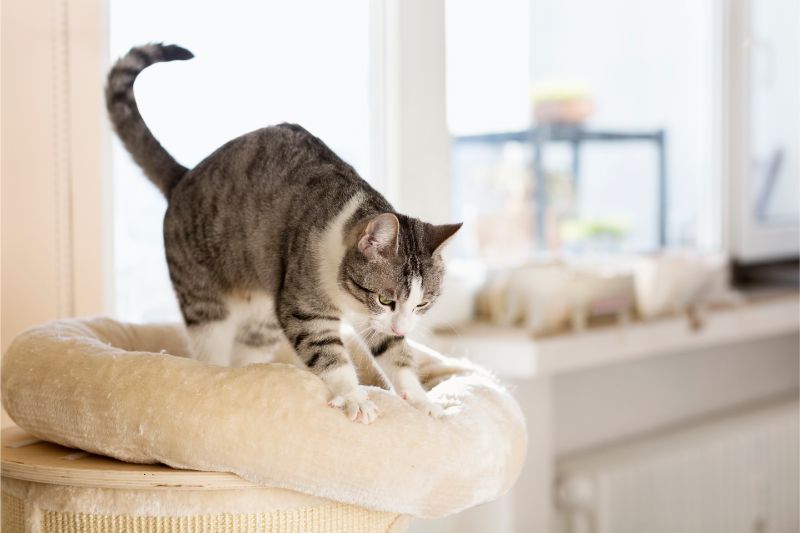 Ever watched a lion or tiger roar or take on another animal with all his strength and might?

Big cats are ferocious, massive, bold, and oh so intimidating!

Whether you are watching a documentary on TV or live-action on the Serengeti, being close to one can scare you to bits.

Well, what if we told you that your sweet little Siamese cat is just a smaller version of the giant lioness you just witnessed tearing a gazelle into pieces?

That’s right! Both big and small cats share so many qualities no wonder they fall in the same category.

For one, both species sleep a lot. If you thought your furry friend at home naps way too much, watch a tiger or leopard during the day.

You’d be shocked to find that he clocks in even more hours of slumber than your kitty.

Perhaps one of the most striking things about big cats is that they love kneading just like our feline beauties. But why do they do it?

Kneading or what is commonly known as ‘making biscuits” is the action where cats push and pull at a soft surface repeatedly using their paws.

If you have owned a cat before, you know what we are talking about.

Domestic cats do this a lot. As kittens, they are constantly kneading their moms’ breasts to stimulate milk flow.

Even as adults, they sometimes pull on pillows and blankets non-stop. Sometimes they prefer your knees or hands as the kneading surface.

The act of kneading is called making biscuits as it is likened to preparing the biscuit dough.

The pull and push is done to make the dough palatable and soft. A cat can also appear to be marching in place as they knead.

Other times, she will roll back on her back and make biscuits on air. This phenomenon is called ‘making air biscuits’.

Why Do Big Cats Knead?

There are several reasons why big cats make biscuits. We have outlined them below.

In the case of domestic cats, kneading is a good sign that your four-legged friend is happy and content.

It is nature’s way of telling you that your pet is super comfortable.

If you are keen enough, you have probably noticed your kitty kneading when she’s petted or in a sleeping position.

When on your lap, she may also knead to display her love and affection for you.

Since all cats have pretty much the same anatomy, it is safe to imagine that big cats make biscuits to display their comfort and happiness as well.

Perhaps they do it after a big meal or when hanging out with other pride members (in the case of lions).

A stressed cat can display all kinds of behaviors. Some dig up holes, make a lot of noise or simply knead.

The action of pushing and pulling paws on a surface is aimed at creating a calmer mood.

It is more or less the same as biting your nails when under a stressful situation.

So when a big cat kneads non-stop, she could be going through a rough time. She is likely to display other behaviors to signal stress as well.

A cat’s paw has a plethora of scent glands in them. That goes for both the small and bigger varieties.

This is the reason they love scratching on surfaces so much. To them, scratching is a way of communicating to other cats that they own the place and should be left alone.

As she kneads on the bark of a tree or the ground, her glands produce a scent that passes a strong message to her enemies.

Big cats also knead as a way of flexing their muscles. For an animal that relies on hunting for survival, upper body strength is everything.

She uses her upper body to run, climb, and stalk prey. Kneading gives the cat a good workout for later.

Plus, stretching just feels good for the poor animal. It calms them and gets them in a good mood just like it does for human beings.

5. To Create A Safe And Comfortable Resting Place

Before lying down, a dog would circle around his sleeping spot severally. This canine behavior dates back to an era when dogs would make their own beds.

Even with a warm and cozy place to rest their heads, these creatures still display the same old behavior.

Well, big cats tend to behave the same way sometimes before winding down.

In the wild, there are no soft beds to lie on. Whether it is a lion, tiger, or leopard, making a cozy place to rest your head is an ongoing endeavor.

Kneading is one of the ways to flatten the place of rest and rid it of any harmful organisms such as bugs and snakes.

This is especially true for momma cats with cubs. They spend a large chunk of time pushing and pulling on their ‘beds’ to make sure they are safe for the young ones.

6. Carryover Of Past Behavior

Like kittens, big cat cubs knead on their momma’s breasts to stimulate milk flow. Even in adulthood, some of them still engage in the habit.

Big cats are mysterious at best. Sometimes they do certain things that make us wonder.

Kneading is one such weird behavior from these wild creatures. Well, now you know it could be triggered by any of the above reasons.