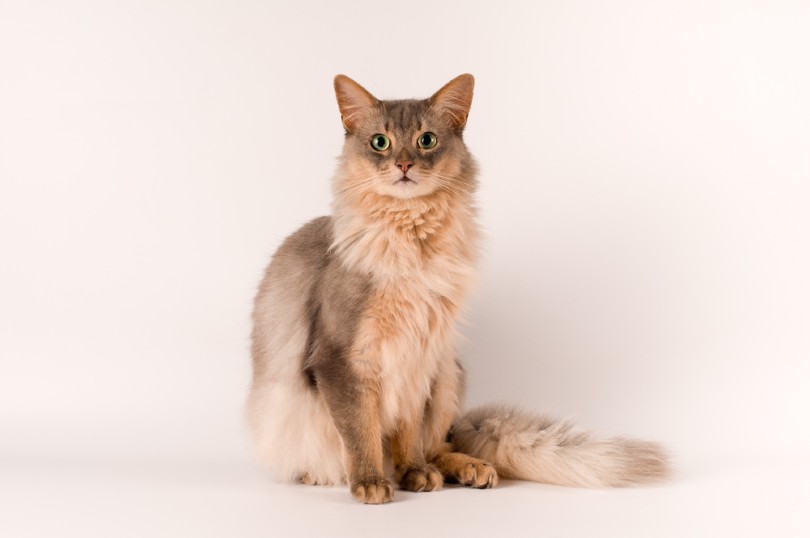 Foxes have soft silky hair and that paired with their sly personality would easily tempt anyone into thinking of domesticating them – but you can’t because these are wild animals that are best left to their wild devices.

But if you are a lover of cats, you can still have a cat that resembles a fox—and that is where Somali cats come in.

Somali cats have long beautiful hair and a thick tail that gives this breed a foxlike look.

If you saw a fully-grown Somali cat from a distance, you would easily confuse him for a fox puppy.

The Somali cat is a descendant of the Abyssinian cat and some people even refer to Somalis as Abyssinians.

But even though these two cats are somewhat similar in appearance and genetics, some subtle differences make them unique.

The most notable difference is the bushy tail of Somalis which is comparable to the tail of a fox.

As the name suggests, Somali cats descended from Africa, specifically along the Indian ocean coastlines of Somalia.

The Abyssinian cat came from further north in present-day Ethiopia (a region that was historically referred to as Abyssinia).

The Somali cat was introduced in Europe in the 1940s although the cat almost disappeared after the Second World War.

The breed however made a comeback in the late 1970s and it was officially recognized by the Cat Fancier’s Association in North America as well as other relevant bodies in Europe.

In addition to the spellbinding bushy tail, these cats also have other foxlike features. Just like your ordinary fox, these cats have huge pointed ears that are perfectly complemented by their huge almond eyes.

They also have a striking ticked coat that can have anything from four to twenty different color combinations.

Just like the Abyssinian cat, Somalis have thick hair but their fur is softer than Abyssinians and any other cat breed for that matter.

Because of their long coats, you may have to brush them once or twice a week.

However, you may need to do more grooming during the winter months because they will shed more.

These cats also have unique markings on their face that form eye-catching patterns around their eyes.

Even though these patterns enhance their foxy look, the markings can also be comparable to those found in raccoons. They also have an adorable nose that has some markings on the leather.

Somalis are not only foxlike in appearance but they are also just as graceful. They are very energetic and love to play with other cats as well as humans.

They love climbing trees and furniture and then jumping over as if in a bid to impress their humans.

These cats are also very affectionate and enjoy cuddling and bonding with humans.

Once they have had their fill of play and exercise, they will happily snuggle up for a nap on the couch.

The Somali cat is a healthy breed but there are still some possibilities of health complications.

Tooth decay, gingivitis, and renal amyloidosis are the main health concerns with this breed.

Feline infectious anemia may also be a health concern although this is one of the ailments that affect all cat breeds.

Somalis may also be prone to erythrocyte disorders like osmotic fragility and pyruvate kinase deficiency.

What Is A Cat Fox?

Cat fox refers to a strange-looking wild cat that was discovered on the French island of Corsica.

Wildlife experts believe this is a new find that has yet to be documented. Even though this cat hasn’t been documented, the locals refer to them as cat foxes because these felines are larger than the average domestic cat and also because of their tail decorations that resemble that of a fox.

These 35-inch long cats also have large and wide ears and dog-like teeth which is believed to be an adaptation for hunting prey.

Researchers are still examining these interesting cats but at the moment, they have found that the cat is not related to any other known cat on the globe although their DNA is somewhat similar to that of the African Forest Cat.

There aren’t many cat breeds that resemble the fox – the only feature that might be common with foxes and several cat breeds is the fluffy tails.

But cats that have fluffy tails like Maines, Birmans, and Himalayans have other features that make them very different from the fox.

So there you have it – the Somali is, without doubt, the cat breed that resembles a fox.

Granted, the cat fox of the French Island of Corsica is another possibility but there is still much to learn about this new cat breed.

For now, suffice to say that the Somali cat is the best candidate when it comes to fox resemblance.