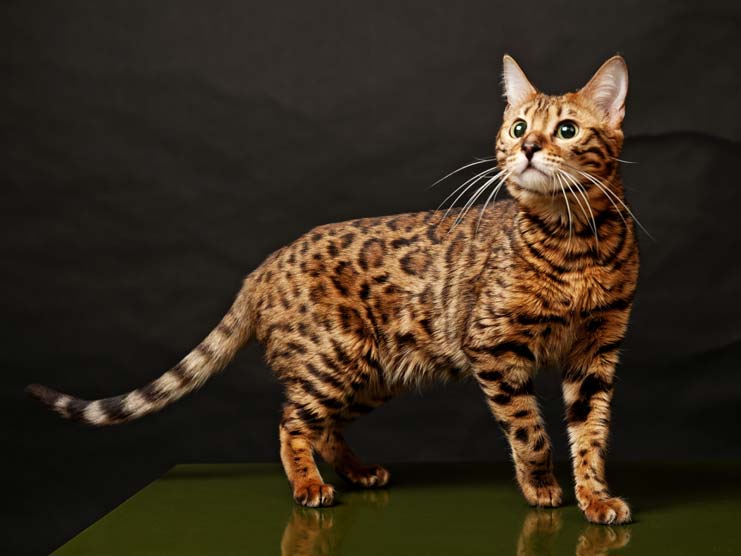 Bengal cats are wild in their looks and mannerisms. If you are into the exotic appearance of a leopard and want something close at home, a Bengal kitty is the right fit for you.

The word Bengal is a term referring to a hybrid between the Asian leopard cat and a domestic cat.

The former is a small wild feline native to the Asian continent. It is slightly larger than the domestic cat with a muscular frame and long hind legs.

At first glance, the Asian leopard cat may look harmless and docile like the domesticated kitty.

However, it is fully wild and cannot be tamed or domesticated with ease. As such, there are strict regulations around owning this kitty or any close relative.

Since a Bengal is the Leopard cat’s offspring, owning one is not a walk in the park.

Many countries and states recognize it as a harmful animal that shouldn’t be kept at home. This is especially true for the first generations of Bengals.

They are bound to exhibit a wide range of behavioral issues not to mention exhibiting harm to people and other animals.

Are they legal in New York?

To say that New York State is a thrilling place to live is an understatement. There’s way too much to see and do almost daily.

From enjoying Broadway shows to touring world-famous museums or walking across the Brooklyn Bridge, you cannot run out of things to do in this hip state.

Historic neighborhoods dot the entire state giving you a reason to get out of your home on the weekends.

Unfortunately, NY isn’t exactly the most welcoming state to all kinds of pets. Sure, it doesn’t ban the usual pets (dogs and cats) but anything that harms human beings and other animals does not have a place in the state, especially in NYC.

This is where the Bengal cat legality in New York comes into question. Technically, these kitties are not legal in the state.

The only way to get around this ban is if you have a USDA license as stipulated by the Animal Welfare Act. This document allows you to own, sell or import a Bengal or any other allowed animal.

But even with this license, you should check with your local laws and regulations to be on the safe side.

Why Are They Banned?

The primary reason Bengal cats are banned in New York is that all wild cat species as well as hybrids are illegal.

The rationale behind this is that wild cat species are erratic and can therefore cause harm to their human owners.

In addition, Bengals are also known to hunt and kill other animals like birds and rodents and so they are believed to pose a threat to local wildlife.

Experts estimate that cats kill billions of birds every year, so any measure to put this in check is welcome.

Bengals are legal in lots of states and it is not clear if the ban in New York will continue holding.

In the UK, the licensing requirement for Bengal ownership was repealed in 2007. It is still not clear whether NY will borrow a leaf.

However, citizens have begun the push and there are even some petitions aimed at lifting the ban on Bengal cats in New York.

If this goes through, it would allow people to own, sell or import these kitties without having to obtain a USDA license.

The petition has been met with mixed reactions with some people in favor of it and others against it.

If you want to own a Bengal in New York, you are out of luck because the state has banned the ownership of Bengal cats and any other pet that is considered exotic or wild.

This could be because of the safety implications or the danger these pets pose to the native wildlife in the area.

The best option for you would be to think of another cat breed that is not illegal.

You could decide to wait until the ban is lifted but there is no telling when or if this is going to happen.

Related Post: Can You Own A Lynx In California?