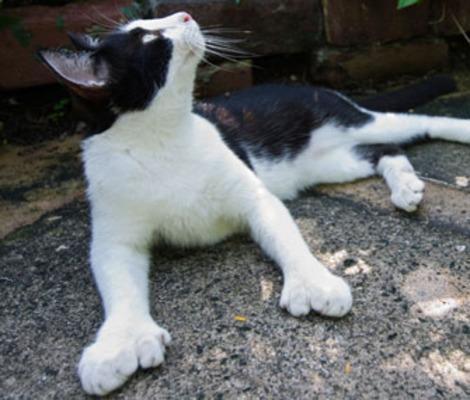 Ernest Hemmingway is known for a number of things, one of which is his love for alcohol and big-game hunting.

He also had a soft spot for cats, most specifically polydactyl cats.

The novelist was enchanted by Snow White – a double-pawed kitty given to him by a sea captain in his day.

He developed a great love for polydactyl cats and had Snow White give birth to more of her kind.

Now, the Hemmingway Home in Florida serves as a museum for these unique kitties.

Polydactyl cats or cats with extra toes on their paws spark a lot of interest in the feline world.

Some people wonder whether having more than the usual number of kitty toes is a good or bad thing for the cat.

The question of whether polydactyl cats are inbred or not also come up a lot in cat circles.

By the way, are these cats inbred?

Polydactyly in cats is a result of genetic mutation passed down from parents to their offspring. It is thus not a deformity as some people may imagine it to be.

The gene responsible for the mutation is called the Sonic Hedgehog and is the same one that causes extra toes in humans and other mammals.

The gene overrides normal genes and causes the existence of the extra toe.

If one parent is polydactyl while the other one isn’t, some of the kittens will have extra toes.

Cats present polydactyly in many different ways. Most have extra toes on their front paws with a few spotting them on the back toes as well.

The extra toe can grow before the dewclaw or after the fourth toe. Learn more about your kitty’s claw anatomy here.

Polydactyl cats are, by and large, not inbred. The gene responsible for the extra toes is dominant.

Even in a polydactyl cat, the recessive gene for normal toes is still present. That means that even if a poly cat is bred, the resulting kittens may not necessarily have double toes.

Polydactyl parents have been known to produce normal or polydactyl kittens in random or isolated breeding situations.

The only sure thing is breeding two normal-toe cats. They will almost always produce kittens with normal toes.

However, two poly parents can very well end up with a non-poly kitten or two in a litter.

Certain breeds are notorious for having polydactylism including Maine Coons and Pixie Bobs. This further goes to show that inbreeding doesn’t cause the dominant gene of extra toes to play out.

Does Inbreeding Increase The Chance Of Polydactyly In Cats?

No doubt breeding two closely-related polydactyl cats may increase the odds of getting a poly kitten.

The chance goes up by around 40-50% compared to breeding two parents with the standard number of toes.

If one parent has polydactyl toes, the possibility of it giving birth to a poly kitten stands at 50%.

When you put two poly parents, the likelihood goes even higher.

However, there’s absolutely no guarantee that two poly parents will give rise to poly kittens. It is more of an infrequent occurrence and one that is hard to predict.

With this in mind, some poly cats have come about as a result of inbreeding. It is not a very common occurrence though.

Because of having extra toes, polydactyl cats are considered to be more attractive than those with normal toes.

This is not the case for every cat owner but some prefer having a kitty with extra toes to one with the normal number of toes.

Additionally, poly cats are believed to have better grip as they walk, run, and jump. The extra toe offers better frictions and stability, no wonder poly cats are considered to be better climbers and chasers.

Sailors in the past utilized these special felines as mousers for their boats. Their wide and large paws also helped keep the cats balanced on rocky seas.

Because of these reasons, poly cats can be more expensive than their normal-toed counterparts.

Consequently, breeders will try to experiment with inbreeding to get what they want. Many of them come up empty but occasionally, they will get poly kittens.

However, poly cats come with their disadvantages as well. The extra toes sometimes present a challenge during grooming.

Getting debris out of the extra toe can be a lot of work let alone having to cut long nails when they grow at an angle.

Poly cats also sometimes have a hard time walking on tiles and other slippery floors and can be very clumsy.

Besides, show cats are not allowed to have extra toes.

These are some of the reasons that make inbreeding illogical. As a matter of fact, breeders work hard to breed out the poly gene.

Check out this post for more insights about inbreeding in cats: Inbred Cats: Everything You Need to Know

Are polydactyl cats inbred? For the most part, they are not.

Inbreeding may increase the chance of getting poly kittens but it is not a guarantee.

Getting a polydactyl kitty is mostly a random occurrence. Most poly cats just got to be in existence because of nature and not an intentional breeding action.

Cat Breeds with Tufts of Fur between Toes

Cat Carpal Pad 101: Everything You Need To Know