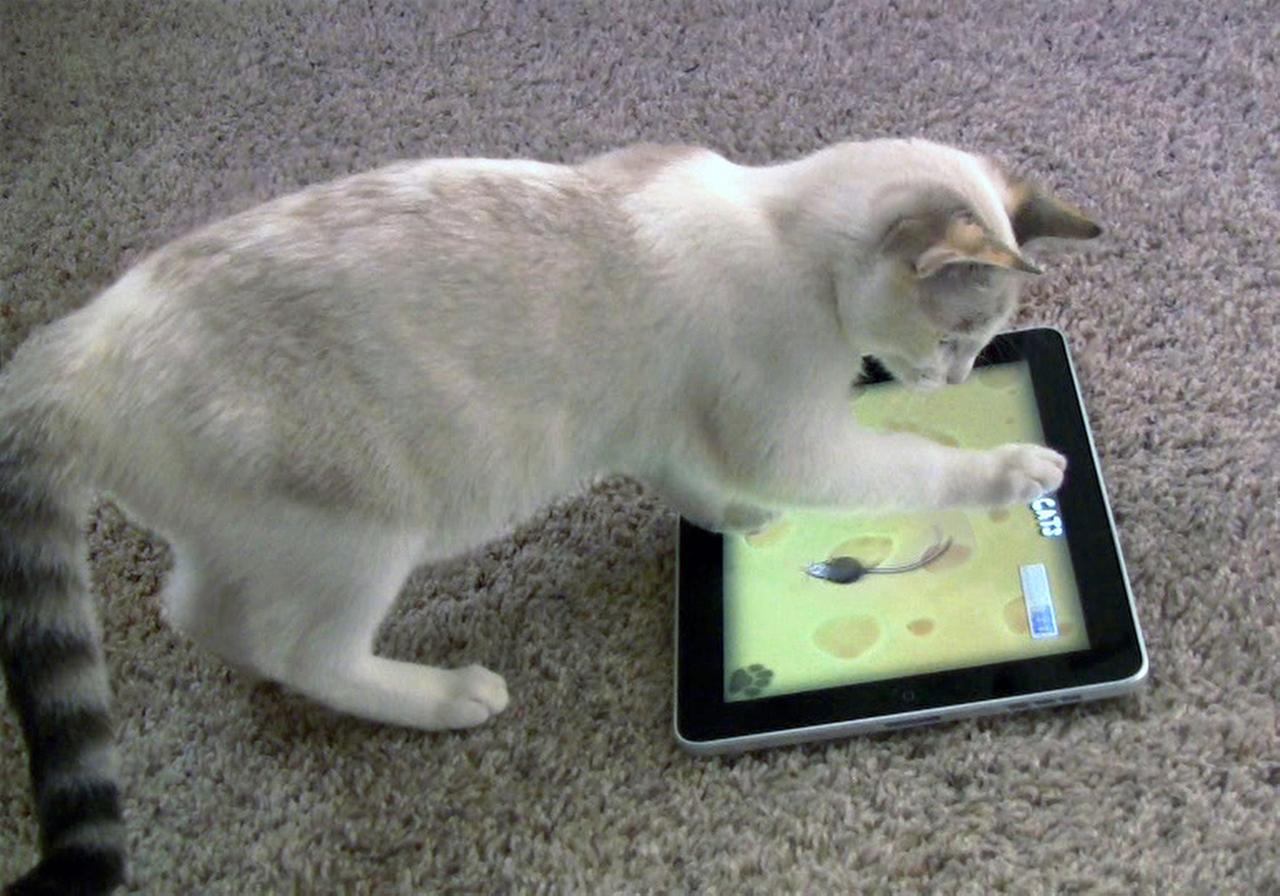 Pet ownership has come from far. To imagine that cats can now play video games is absurd.

It wasn’t until the 70’s that video games were invented for humans. Back then, this form of entertainment was a reserve for kids.

Well, that has since changed. Not only do adults play them but pets have joined in the fun as well.

The next time you feel sad for your kitty as you click and punch away, realize she can be a part of the entertainment. There are specific video games built specifically for cats.

To help you know more about cats and gaming, we have put together a guide that answers your questions about cats playing video games.

First and foremost, do cats have what it takes to play video games and have fun with them?

No doubt about it. There are endless YouTube videos online showing cute mousers jumping over their iPad screens and tapping them in a game of play.

Designers of cat gaming videos understand that cats are prey-driven animals. More than anything, they enjoy chasing after things like rats and mice.

They can do this in real life or on a tablet screen. With this in mind, game developers have come up with various games aimed at getting a cat to do what she does best—hunt.

The games include things like smacking mice or chasing after swatting bugs.

When a cat sees the bugs moving around, her instinct would be to chase after them.

The game then records scores based on the number of successful paws on the screen.

This is one version of a cat game but there are different ones in the market.

The bottom line is that kitties can and do play video games.

Related Post: What Is The IQ Of A Cat?

With subtle, natural movements of prey, high-contrast visuals, and a ton of rewards, you bet that kitties love getting in the action.

As they watch the “prey” move around, the cat will feel the excitement rise in her.

She will sit still at first as she watches the target then calculate the best way to attack it.

Once she comes up with the best strategy, she will pounce on the target.

When she does, her score will increase, a sound is played and rewards start falling.

All the while, the cat-specific visuals—colors, saturation, and hue will blow her mind.

Very few cats can say no to this kind of entertainment. It is certainly much better than playing with a plush toy for hours on end.

Research done to find out if cats really enjoy playing games confirmed that they do indeed love it.

The 3-year study was carried out at the RMIT University in Australia. It revealed that it is not only people that get a lot of stimulation from electronic games.

Cats were shown to love the action too—just as much as their owners.

As the family sits down to engage in video games, their cats would join in.

Why Are Cats Good At Video Games?

Your cat is an incredible predator. When outdoors, she is always stalking birds, fish, and rodents and wondering how to convert them into food.

Felines are made to be effective on the hunt. They can see and hear much better than most animals and have strong instincts to catch and kill prey.

Well, cats also hunt for fun. It is these very qualities that make them good video gamers.

As mentioned before, video games capitalize on the predatory side of cats.

No matter the game, there’s always something running across the screen. This ranges from a laser to a type of cat-specific prey such as a mouse or a fish.

As the thing traverses the tablet screen, it motivates the cat to chase after it.

She will touch the screen, jump on it, ultimately having fun and being good at it.

Sure. Game videos help your cat with the following:

Anything with movement is good enough for a cat. Here are a few games you can consider when looking for a good game for your kitty.

How Do You Play With Cats?

Many of the available video games for cats are only played by the kitty.

This means that besides letting your sweet baby sit on your lap and supervising her play, there’s isn’t much else you can do.

However, Mew and Me is quite different as it gets you in on the action.

Both you and the cat can get together in the game to steer a spaceship among other missions.

Should I leave the TV on for my cat?

Besides playing video games, some cats also love starring at the TV for hours.

Granted, not all kitties have this habit but it is not uncommon to find some that won’t leave the TV screen.

This kind doesn’t have any interest in touching the screen or anything. She will just stare at the moving images for a very long time.

If yours fits this description, there’s no reason why you should stop her from watching the TV.

Felines that don’t manage to go outdoors have especially been shown to take pleasure in the TV.

As expected, they are into programs that show rodents birds, and fish.

Cats naturally get attracted to these kinds of animals.

If your kitty doesn’t have a tendency to scratch the telly and also has perfect eyesight, let her watch as much TV as she likes.

Cats are intelligent creatures who can take part in electronic gaming.

As long as the game satisfies their craving for moving objects, they will enjoy jumping and pouncing on fake targets on a screen.

If you want next-level fun for your furball, get her a good tablet and install a few games therein.

Related Post: How to Make Cat in Little Alchemy