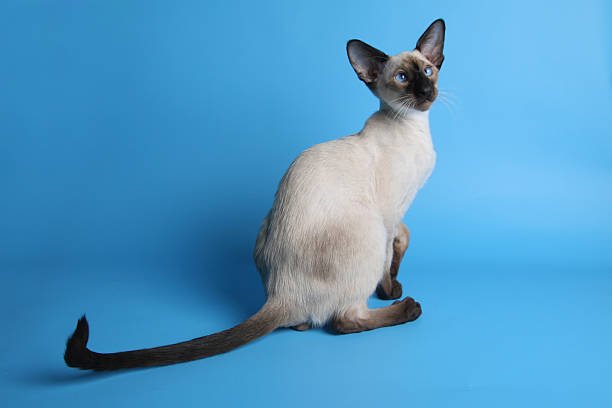 Watching our cat’s tail can tell you a lot about your cat.

For instance, a straight tail with a hooked tip is usually a cat’s way of passing a friendly greeting. It could be a sign that your cat is feeling playful and wants to play.

In particular, if you see your cat’s tail kinking back and forth, she’s probably in the mood for a game, so you can pull out her toys.

If the curve at the tip of the tail is downwards, it could mean the cat is getting defensive. In fact, if your cat’s tail is kinked and she is hissing or growling, it’s a clear sign that she’s angry and you should back off.

A cat’s kinked tail tip can also be a sign of fear or anxiety. If your cat is cowering and her tail is kinked, she’s probably feeling scared.

Finally, if your cat yelps when you touch her tail or she is holding her tail very still, it could be a sign that she is in pain. If you suspect your cat is in pain, take her to the vet.

But in addition to these, some cats have a kinked tail and that should not be confused with a cat that bends its tail to communicate something.

So, Why Is My Cat’s Tail Crooked?

There are a couple of reasons why some cats have crooked or kinked tails:

To begin with, a cat can have a kinked tail as a result of an accident. Any accidental pressure applied on the tail, e.g. if a person steps on it, can break the bones in the tail.

In the event of such an accident, you should take your cat to the vet right away.

Depending on the extent of damage, the vet might recommend different remedies or surgery.

Once the treatment is over, the tail might remain kinked forever but at least the cat will not be in pain anymore.

The other reason for kinked tails in cats is genetics. Some breeds are naturally born with kinked tails.

Because these cats are born this way, they don’t incur any pain and neither do they have issues with balance and movement.

Cats with kinked tails were first documented by Charles Darwin in the Malayan archipelago in 1868.

Over the years, experts have observed the prevalence of short-tailed cats in South- East Asia.

Cats in the entire region of Burma, Pegu, Siam, and the Malayan archipelago are known to be short-tailed and some of them have a knot.

In China, kinked cats were considered to be a sign of good fortune and wealth and were therefore very popular.

Health conditions may also cause a cat’s tail to be crooked. One of the main health issues that are known to cause kinked tails in cats is Manx Syndrome.

This condition is characterized by an absent tail although some cats develop a short and kinked tail.

Cats with Manx Syndrome often have problems with their spine and joints, and they may also suffer from intestinal issues.

While there is no cure for this condition, cats with Manx Syndrome can still lead happy and healthy lives with the help of proper medical care.

Related: Are All Tailless Cats Manx?

Types of Kinked Tails in Cats

There are three main types of kinked tails in cats:

Minor and medium kinked tail cats are more prevalent than those with extreme kinks.

Even though the short and kinked tail is often thought of as a defect in some quarters, it doesn’t in any way affect the quality of life of the cat.

What Breed Of Cat Has A Kinked Tail?

Even though kinked tails are often a result of a skeletal disorder, some breeds have a naturally formed kinked tail from birth.

The following are the breeds with kinked tails.

Siamese cats are traditionally known for their kinked cats.

Legend has it that these Siamese breeds developed kinked tails because the Siamese princess would place her rings on her cat’s tail when bathing.

However, kinked tails in Siamese breeds are no longer common due to breeding practices.

Burmese cats are descendants of Siamese breeds and that explains why they also have the kinked tail gene.

The first Burmese cat was brought to America in 1930 and it was bred selectively with Siamese cats.

This way, the distinctive traits, e.g. the kinked tail, of the breed were maintained.

Bobtails, both American and Japanese, are another breed that has kinked tails.

It is believed that the kinked tail is a result of a mutation that is caused by a dominant gene.

Even though it is possible to have a bobtail cat with a normal tail, there must be at least one cat from a kitten litter that has a kinked tail.

According to the cat fanciers’ association, the Devon Rex was the first cat breed to be diagnosed with a genetic mutation that causes cats to develop a kinked tail.

The mutation affects the bones in the tail, causing them to grow at an abnormal angle.

While this may seem like a disadvantage, it actually gives Devon rexes better balance and agility than other cats.

In addition, their crooked tails are thought to be cute by many people, making them one of the most popular cat breeds.

While Ocicats are known for their unique spotted coats, another distinctive feature of this breed is its crooked tail.

Some people believe that the crooked tail is a result of Ocicats being bred with Siamese cats, however, this is not the case.

The truth is that the crooked tail is a naturally occurring mutation, and it is thought to be caused by a recessive gene.

Crooked tails are not harmful to Ocicats in any way. In fact, many people believe that they add to the breed’s charm.

Asian cats also have kinked cats and there are many theories trying to explain this including some ancient beliefs that they might have been made that way because perfection is not possible.

However, the most likely explanation is that it is a result of genetic mutations.

Unlike other cat breeds, Asian cats have not been extensively bred for specific characteristics.

The genetic mutation may, therefore, be due to inbreeding, which can lead to health problems and birth defects.

However, it is also possible that the crooked tail trait is simply a result of random mutation.

Can cats be born with kinked tails?

There are several possible explanations for a kitten born with a kinked tail.

One possibility is that the bones in the tail were not properly formed in utero, causing the tail to grow at an irregular angle. This may be a side effect of inbreeding, but other genetic factors can also cause it.

Another possibility is that the muscles or tendons in the tail were damaged during birth, causing the tail to grow in a crooked or kinked fashion. This is typically a result of trauma during delivery and is more common in breech births.

Some breeders consider kinked tails in kittens to be defects and have tried to eradicate them through crossbreeding. However, it is important to know that if both parents have a kinked tail, then the kinked tail gene will most likely be passed down to the kittens.

In some cases, a cat bent tail genetic mutation might be to blame. The real genetic causes of kinked cats have not been established, though, and experts are still investigating the phenomenon.

However, it is still possible that the cause may be unknown. If you are unsure of the cause of your cat’s kinked tail, it is best to consult with a veterinarian.

They can perform tests on the kitten born with a deformed tail and give you a more definitive answer.

Is It Normal For Cats To Have Crooked Tails?

No, it is not normal for cats to have crooked tails.

While a slight bend in the tail is not cause for concern, a severe curve or kink in the tail may be a sign of genetic defects, neurological problems, or injuries.

Crooked tails are often the result of genetic mutations that occur during embryonic development. These defects can range from mild to severe, and they may not be immediately apparent at birth.

If the kinked tail was caused by a genetic mutation, no medical intervention is needed.

If it was caused by some kind of trauma, medication may be required because the cat may be in pain. Once they heal, the kink may remain for life but the cat will still have a normal life.

Can a kinked tail be fixed?

A kitten that is born with a kinked tail should not raise any alarm. The kitten is fine and doesn’t need any medical attention.

If the tail got crooked due to an accident, a visit to the vet might be necessary.

The vet will examine the injury and advice on the best way forward. But for the most part, the treatment given will be mainly to alleviate the pain and heal the wound. However, the tail will remain kinked for life.

It is possible to take your cat for surgery to straighten the kinked tail.

However, the surgery is purely cosmetic as it will not improve the quality of life for the cat.

Because this surgery would be cosmetic and risky, it wouldn’t be justifiable. The possible complications outweigh any seeming benefit.

If your issue is swelling and lumps, never judge the book by the cover. What you think to be a benign kink might not be a big deal.

It is best to take your cat for examination by the vet just to be sure.

Radiography can reveal what the issue really is and then the vet will know whether they are dealing with a deformity or some vertebral injury.

In conclusion, cats with kinked tails can still have a normal life.

They will not lose their balance or walk awkwardly.

Even if the tail got kinked from an accident, just take the cat to the vet and once the injury heals, she will be fine.

Why Is My Cat Pulling Out Fur At Base Of Tail?