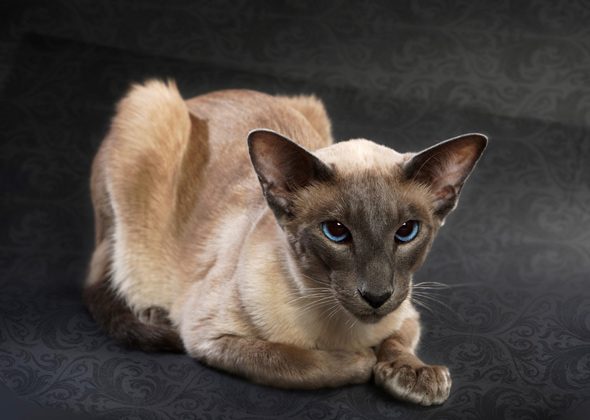 There are so many cat breeds around and each breed has something unique about it.

However, some physical attributes are shared with a couple of breeds. These include the color of eyes, the type of coat, the size and shape of ears, and the size of noses.

Cats with long noses are unique because it makes them stand out from the usual flat nose of most breeds.

The following are 10 cat breeds that have long noses.

Moggy (or Moggie) is a British slang word for a cat that doesn’t have a pedigree.

Moggies are therefore very easy to find and a lot cheaper than other breeds.

It is believed that the term Moggie originated from the M marking that is on their face just above the hose.

Even though there isn’t conclusive evidence of this breed’s origin, it can be safe to infer it originated from Britain since it was named by the Brits.

Moggy cats come in all shapes and sizes and one distinctive attribute is their long and big noses.

The organ of smell in this breed runs forever on the face and is quite obvious.

The members of the breed are mostly timid but once they cozy up to you, they can be very friendly too.

They have awesome health and this is attributed to their wide genetic pool.

The Highlander cat, also known as the Highland Lynx, is a new breed that was an offspring of the Desert Lynx and the Jungle Curl.

Joe Childress bred the two with one aim: to get a cat breed that had a big cat look and yet had a gentle soul which would be perfect for home pets.

The nose is not only long but wide as well. Together with the breed’s unique chin, the nose gives the kitty a boxy look to its muzzle.

Highlanders can both be longhaired or shorthaired depending on their parents.

These cats love to entertain because they always want to be the center of attention. They come in three main coat types namely, mitted, bicolor, and color point.

Ragdolls are known and loved for their striking blue eyes with a color point coat that makes them a beauty.

They also have Roman noses characterized by cute bridges and a slight bend to them.

The breed was developed by an American breeder in the 1960s and the cat is very affectionate and has a lucid temperament which makes her very good with kids.

The calm temperament is believed to have come from the Persian and Birman breeds that were used to breed them.

Ragdolls need meticulous breeding and are therefore less common and more expensive than other breeds.

If you are looking for a low-shedding cat breed, ragdolls are right up your alley. However, they tend to shed more than usual in spring.

The savannah is another cat breed that has a long nose.

When seen from the side, the nose and a small chin give the kitty the wild appearance she’s famous for.

These cats are known to be affectionate towards their owners but can be snobbish to strangers.

They also have a tall appearance which can easily fool you into thinking they are bigger than they are. Neutered male cats are usually the largest.

For a cat to be recognized as a Savannah breed, its coat has to be spotted. That’s according to The International Cat Association (TICA) standard.

Savannahs borrow most of their physical attributes from the wild African cat as well as the domestic version of the Serval cat.

Just like Savannah cats, the Cornish Rex stands tall on her legs and you can easily mistake her for a large cat until you pick her up.

This cat’s large ears are conspicuous. However, her Roman nose has a bridge that makes it appear long and slightly bent.

The parents of Cornish Rex cats must be ready to be involved with the cat because she loves company and attention.

The cat is quite athletic and she needs a lot of space for playing, running, and jumping. These activities also help to keep her fit and healthy.

However, his coat is not very good at protecting her from the sun rays, so you may want to keep her indoors, especially on hot days.

American curls get their name from their distinctive ears which curl back from the face.

The cartilage in the ears is delicate and the ears should therefore be handled with care to avoid damaging them.

Apart from having curled ears, these kitties also have sweet little snouts.

American curls are very pleasant and they love kids too which makes them great family pets.

They love to play so much and they can even learn to play fetch. Their playful and jovial nature is what has earned these cats the nickname, the Peter Pan of cats.

These cats are also quite intelligent and can even open doorknobs as long as they are within reach.

Balinese cats are known for their playful, friendly, and inquisitive nature.

One of the main challenges of these cats is they can get very vocal and demanding. But that is a small price to pay for their beauty and friendly spirit.

Contrary to common belief, Balinese cats do not originate from Indonesia. Balinese got the name when it became apparent that their grace and elegance were comparable to that of dancers in Bali temples.

This breed is also a result of spontaneous mutation in Siamese breeds which resulted in cats that have longer coat types.

Their long nose coupled with their big blue eyes makes them such a beauty to behold.

As a long and slender breed, the Abyssinian has a face plastered with a gorgeous long nose. It adds to the beauty of the breed in many ways.

Apart from its pretty face that features a long nose, the other most striking feature of the Abyssinian is its coat.

It has a tabby coat that has individual hairs banded in several colors which makes it quite a sight to behold.

These cats are often referred to as the clowns of the cat family not only because of their coats but also because of how they love to play.

They will follow their owners in the house in a bid to encourage them to play.

The Siamese cat has a sophisticated look – almost like it was dressed in an elegant white coat with pristine black accessories on the face and feet not forgetting the tanzanite-like blue eyes and adorable long noses.

Like the ears, tail, and face, the nose is black in color—complimenting the chocolate coat very well.

This is one of the cats that descended from Asia but it grew into a popular breed in North America and Europe by the 19th century.

She also loves her playtime, so you will have to keep her engaged with lots of toys and physical activity.

The Bengal cat has a jungle-look with a spotted coat that resembles that of a leopard.

In fact, the name of this breed is adapted from the Leopards scientific name (Felisbengalensis).

These cats have a strong and athletic bod,  so they will need to be very active.

Bengals are among the cats with large, puffy, and long noses. It makes sense since they are large felines.

Cats are generally more independent than dogs, so they make for better house pets.

And if you are interested in one that has a long nose, just pick one of the breeds discussed above.

Read through carefully though to make sure you have picked one that matches your lifestyle.

For instance, don’t pick one that needs lots of playtime if you don’t have the time or patience.