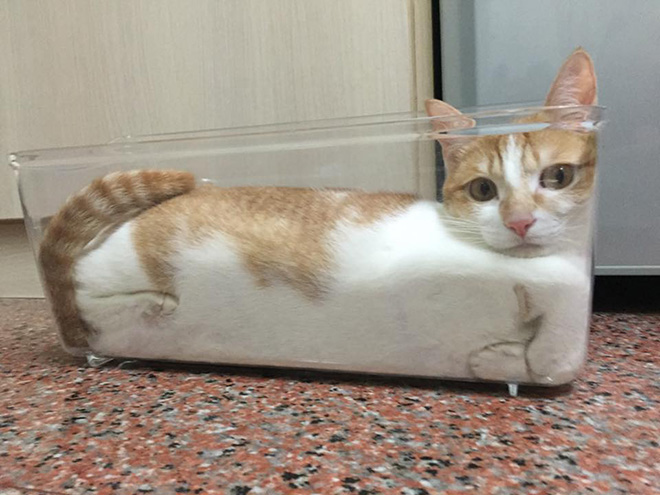 Seems like a silly question but have you ever thought of your cat being liquid or solid?

If you are like many other people out there, you probably haven’t.

How can you when you are busy figuring her out in many other areas?

You are preoccupied with her weird grooming habits. You cannot get over her meticulousness when it comes to feeding, drinking, and eliminating or how to strike the right balance between giving her independence and spending time with her.

Even if cats weren’t so mysterious, very few of us can really imagine them as either solids or liquids.

Throughout school, we mostly studied the physical states of matter in terms of non-living things.

We would ponder whether ice is really solid or liquid or if glue is wholly liquid or wholly solid.

Well, today we will focus on our cats and seek out to know where they fall in physics. The answer will shock you to your core.

If it wasn’t for a few intelligent minds bringing the attention of the world to think about rheology in cats, most of us would still be in the dark about it.

First came Tom, a researcher who sought to find out if cats are liquids or solids.

After conducting 15 experiments using a variety of container geometrics and utilizing different breeds, he came to the conclusion that our feline friends are indeed liquid.

The reason is that they can assume the shape of any container they are put in.

Additionally, cats show no change in volume. Both are fundamental properties of liquids.

He published his works on Bored Panda’s Funny Animals Section and titled it “15 Proofs that cats are liquids”.

Clearly, some folks weren’t so convinced with Tom’s findings of our feline friends. One such person is a French physicist by the name of Marc-Antoine Fardin.

In 2017, he presented his own findings to Ig Nobel Prize claiming that cats can be liquid or solid based on the circumstance.  He had funny but insightful scientific arguments to back him up.

Ig Nobel Prize is the funny side of the more serious Nobel Prize, a prestigious award given to those who have made the biggest contributions to mankind.

The former honors studies that “make people laugh then think”. In short, the Nobel Ig Prize awards people who can combine science and humor.

The ceremony is held at Sander’s Theatre in Harvard University and attended by over 1000 people including legit Nobel laureates.

In Fardin’s research, kitty fluid dynamics stretch further than their abilities to fit into small spaces.

They exhibit richer and more complex rheological behaviors than what Tom found in his earlier study.

If given enough time, cats can adapt to the shape of a small container meaning they are liquids on this front.

However, when placed in something like a bathtub filled with water, they will become solid—not conforming to anything.

They will instead do anything to keep in contact with the water.  For these really funny and scientific arguments, Fardin was awarded the 2017 Ig Nobel Prize.

Are Cats Liquids Or Solids?

In rheology (the branch of physics that deals with the flow of matter), a liquid is a material that can modify its form so it can fit within a container. A good example is water as it fits and takes the shape of anything.

However, this definition is not as simple as it sounds. The action is a characteristic of time—what is called relaxation time.

Before you term something as liquid, you have to observe it over a period of time.

In the case of our cats, Fardin established that they adapt to the shape of the container placed in if given enough time. This means that kitties can remain solid if they don’t get enough relaxation time.

Factors such as the stress the cat is under and the shape of the container also matter.

In general, cats have very flexible bodies. The biggest contributor is the fact that they have no collar bones.

In humans, the bones on the shoulders attach to bones. That means they are not as flexible.

Our furry friends, on the other hand, have free-hanging collar bones. These are attached to nothing but muscle allowing them to assume any shape.

In addition, cats naturally have flexible spines. Their vertebrae are like spools on a string and have elastic cushions between them. This makes them the great acrobats they are.

The definition of a solid is a material that is firm and stable in shape. While a cat can fit into any shape, she has to be given enough time to do so.

When you divide the relaxation time by the experimental time, you end up with what is called the Deborah number (named after the infamous Biblical character Deborah).

If you get more than one, the material under experiment is largely solid. However, if it is less than one, it is relatively liquid.

What this means is that if the relaxation time is small, the cat may remain solid.

If she’s stressed or tries to squeeze herself in too tight a space, her becoming liquid is unlikely to happen.

As we’ve already said, your kitty will be firmly solid if placed in a big space with water.

Their ability to conform to any shape of a container gives cats many advantages. For one, they can squeeze into tiny spaces and escape predators.

If you’ve ever seen a dog follow a cat only for the latter to slide through the bottom of the door, you know what we are talking about.

Secondly, this adaptation also gives them an upper hand over prey. They can stalk and get access to hard-to-reach areas to find and retrieve food.

Do Cats Have Shoulders?

Are cats liquid or solid? Well, now you know they can be both.

It really depends on the shape of the container, stress in the kitty’s part, relaxation time, and experimental time.

They are mostly liquid though, thanks to their flexible spines and free-hanging collar bones.