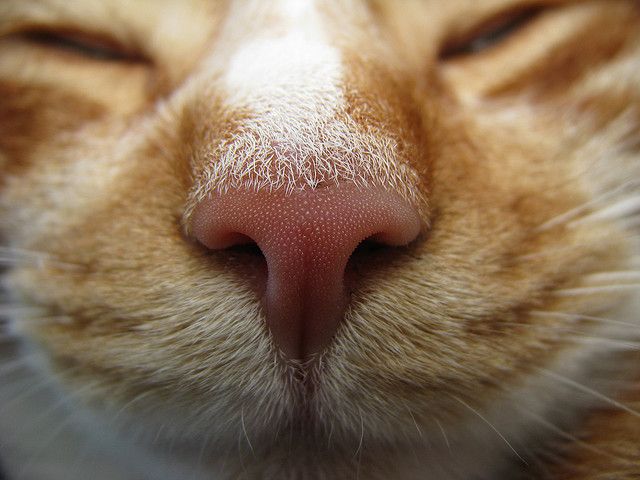 Cats are well known for their unique noses. Take a look at any cat and you’ll notice how different their nose is from ours.

For one thing, it’s much shorter. And if you look closely, you’ll notice that the nostrils are placed slightly higher up on the nose than they are on ours.

But what really sets the feline nose apart is its unique structure.

The anatomy of a cat’s nose is designed for maximum efficiency in smell and breathing.

Cats have a keen sense of smell, thanks to their large olfactory bulbs, which contain more scent receptors than any other type of mammal.

Their turbinates also help filter out dust and other particles from the air, making it easier to breathe.

In this post, we will explore the fascinating science of feline noses. Let’s get started!

Detailed Anatomy of a Cat’s Nose

A cat’s nose is made up of many different parts, each with a specific purpose. We will look at it in two sections: the exterior and the interior nose.

The exterior of the nose is called the rhinarium. Rhinarium is a Latin word that means, “belonging to the nose.” It is used to describe the furless skin that makes for the external nose of the cat.

The rhinarium functions are to protect the nostrils from foreign objects and to help keep them moist.

The rhinarium also aids in air conditioning; it is full of blood vessels that help regulate the cat’s body temperature.

Rhinarium is covered in a particular type of skin called vibrissae.

Vibrissae are long, stiff hairs that help cats smell by trapping scent particles. They also help the cat navigate in the dark and detect movement.

Underneath the rhinarium is a layer of tissue called the mucous membrane, which is full of blood vessels and helps to moisten the air that passes through the nose.

The inside of a cat’s nose is divided into two chambers: the olfactory chamber and the respiratory chamber.

The olfactory chamber houses the olfactory bulbs, which are responsible for processing smells. This chamber is full of smell receptors, which are sensitive to a wide range of odors.

Cats have a highly developed sense of smell. Their olfactory bulbs are up to 50 times more sensitive than ours, and they have way more many smell receptors than we do.

Cats also have a “Jacobson’s organ”, which is an extra olfactory bulb that is responsible for processing pheromones. This allows cats to communicate with each other through scent.

The respiratory chamber contains the nostrils (also called nares) and the turbinates, which are long, thin bones that help to filter the air that a cat breathes.

The respiratory chamber is where air passes through on its way to the lungs. This chamber is lined with a thin layer of a mucous membrane, which filters out dust and other particles from the air.

The nose is one of the most important organs in a cat’s body. It is responsible for the sense of smell, which is vital for a cat’s survival. The nose also helps to regulate a cat’s body temperature.

If you notice that your cat’s nose is dry, cracked, or bleeding, it is important to take them to the vet as soon as possible.

A healthy nose should be moist and cool to the touch. If you are concerned about your cat’s nose, please consult your veterinarian.

They will be able to give you more specific advice on how to take care of your cat’s nose.

How a Cat’s Nose Works

Picking up on subtle scents is important for cats since they rely heavily on their sense of smell for communication and to locate food. Their noses are specially equipped to help them do this.

A cat has around 200 million scent receptors, whereas humans have only about six million. This high number of receptors allows cats to pick up on even the faintest of smells.

That’s why a cat can smell things that we can’t even imagine.  They can also distinguish between different smells, something that humans are not able to do.

The inside of a cat’s nose is lined with a special type of mucus that traps smells. This mucus is then sent to the brain for interpretation.

Cats also use their noses to regulate their body temperature. When it’s hot outside, a cat will pant to cool down, and when it’s cold, a cat’s nose will warm up the air before it enters the lungs.

The shape of a cat’s nose also plays a role in its sense of smell. Their noses are long and narrow, which allows air to flow through them more easily. This means that they can take in more scent molecules, making it easier for them to identify different smells.

Additionally, the bumps on a cat’s nose, called turbinates, are full of blood vessels that help to increase the surface area inside the nose. This allows more smells to be detected.

A cat’s sense of smell is so powerful that it can even be used for medical diagnosis. If a cat has a cold, for example, its sense of smell will be diminished and it may stop eating. This can be an early warning sign for cat owners.

So, the next time you take a good look at your cat’s nose, remember that it’s not just for show.

It’s a complex and fascinating organ that plays an important role in your cat’s life.

Nose color can be an indication of health in some cats. A properly functioning nose should be cool and moist to the touch and the color should be pink or a very light brown.

If your cat’s nose is hot, dry, or discolored, this could be a sign of an illness and you should take them to the vet as soon as possible.

There are three main types of feline nose shapes: blunt, Roman, and pug.

The blunt nose is the most common among domestic cats, while the Roman and pug noses are more commonly seen in purebreds. Each nose shape has its own set of defining characteristics.

Learn more here: What is a Roman Nose in Cats?

1. What is normal/abnormal for a cat’s nose?

A normal cat nose should be slightly wet and cool to the touch. It should be free of discharge, crusting, or swallowing.

The nostrils should be symmetrical and the area around the nose should be free of any swelling or redness.

The nose of a healthy cat should be cool and moist. When a cat’s nose is cold and wet, it is said to be “in good condition.”

A dry or crusty nose can be a sign of illness, and a warm nose may indicate a fever.

3. Why is my cat’s nose whistling?

If your cat’s nose is whistling, it may be because of a condition called “nasal hyperkeratosis.”

Nasal hyperkeratosis is a buildup of excess keratin on the nose. This can cause the nose to become dry, cracked, and irritated.

Nasal hyperkeratosis can be caused by a variety of things, including allergies, exposure to chemicals, or an underlying medical condition.

Cats have a highly developed sense of smell, and their noses play an important role in their daily lives.

The nose bridge is the area between the eyes, and it is covered in sensitive hair follicles.

When you rub a cat’s nose bridge, you are stimulating these follicles and causing the release of pheromones.

This can be a very pleasurable experience for your cat, and it may even help to bond with you.

5. What is the black stuff on my cat’s nose?

The black stuff on your cat’s nose is called a rhinarium, and it is an area of highly sensitive skin.

This skin helps your cat to pick up scent molecules from the air, and it also helps to protect the delicate inner workings of the nose.

The rhinarium is usually black or very dark in color, but it can also be pink or white.

If you notice that the color of your cat’s rhinarium has changed, it may be a sign of illness and you should take them to the vet for a check-up.

The nose is a vital organ in a cat’s body and plays an important role in their sense of smell, communication, and regulation of body temperature.

The nose is therefore a very vital organ and should be taken care of.

If you notice any changes in your cat’s nose, please consult your veterinarian immediately.