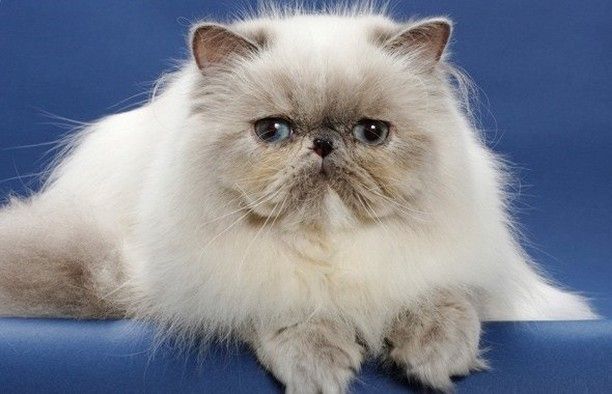 Pet parents know that cats come in all shapes and sizes—and the nose shape is one of the most fascinating distinguishing characteristics of cats.

Your cat’s nose is comparable to your fingerprint because each cat has unique nose features.

In this post, we will identify 8 snub-nosed cats that are perfect for families. So, keep reading to find out what these breeds are!

The Himalayan’s flat face and snub-nose coupled with a quiet but energetic personality are what make this cat one of the most popular breeds.

Even though this is a medium-sized cat, her large fur makes the cat appear larger than it is.

There are two broad categories of Himalayans: doll-faced or traditional and ultra-type of peke-faced Himalayans.

Peke-faced Himalayans are the ones that have extreme facial features.

Show Himalayans typically have a nose break that is similar to peke-faced Persians and they also have big round eyes.

Their nose leather runs directly between their eyes. On the flip side, the noses of breeder/ pet Himalayans are slightly longer and they may also have smaller eyes.

Related Post: Is Himalayan Siamese Cat Mix Right For You?

Just as the name suggests, the Persian cat has its ancestry in the Persian desert and it has been cherished by cat parents for hundreds of years.

As this cat became more popular, breeders in Italy, Germany, and the United States developed the snub-nosed Persian, which is now almost universally accepted as the breed standard.

This feature of the flattened nose is believed to be the result of a genetic mutation.

The breed can also be found in its original features (without a snubbed nose) although organizations like the Cat Fanciers’ Association only recognize the snub-nosed Persian as the accepted breed standard.

Related Post: What Is A Punched Face Persian Cat?

The Bombay cat was introduced in the 1950s when breeders tried to breed a pure black Burmese by crossing a sable Burmese with a Black American Shorthair.

In addition to its snubbed nose, this breed’s other notable characteristics are its golden eyes and its gleaming black fur.

This cat is round-faced which makes the snub nose stand out.

Bombay cats are naturally curious and very friendly and would easily stray into the neighbor’s house or a delivery van.

It is, therefore, a good idea to keep them indoors when not under supervision.

The British shorthair has a distinctive snub nose that comes in cherry red, black or brick red with a black nasal line at the corners of the nose.

This cat has a round head with chubby cheeks and round eyes which when combined with the snub nose give him a smiling expression.

British shorthairs typically come in blue but other possible colors include cream, black, white, and tabby patterns like calico, bi-color, and tortoiseshell.

These cats love attention but ironically want their space as well, so you must be careful not to cuddle them too much.

Burmese kitties have a distinctive wedge-shaped head with large eyes and ears and a snubbed nose.

These cats have outgoing personalities and are often likened to dogs.

Burmese is a Thai name that loosely translates to beautiful, spending, and fortunate—and this cat leaves up to the name.

It is not only a pretty kitty but it is also very friendly and would be a great starter cat for anyone who has little or no experience with cats.

These are low-maintenance cats because they are very good at self-grooming and also blend in well with other pets, children, and even strangers.

The exotic shorthair was developed by breeders who wanted a short-haired cat that looked like a Persian.

As a consequence, this breed has lots of similarities with the Persian including but not limited to the snubbed nose, temperament, and coat pattern.

It has an oval and massive head with chubby cheeks and a broad snubbed nose that has a pronounced stop.

These are soft-hearted and relaxed cats which make them great family pets, especially for pet parents who do not have a very active lifestyle.

These cats are quite rare and it’s almost impossible to get them at a shelter.

You can however get them from reputable breeders although that will set you back $1,200 – $5,000 depending on the pedigree.

The Chinchilla cat breed was developed by breeders who were attempting to develop a silver Persian.

The result was a white (and sometimes silverish) cat that resembles the Persian.

For starters, they have a flat head with a snubbed nose and have long luxurious fur. This cat also resembles a South African rodent after which it was named.

The Foldex (also known as Exotic Fold) was created by breeding the Exotic longhair with the Scottish Fold and its most distinguishing trait is the unique ears.

The nose features a noticeable break between their eyes and this coupled with a round face makes them a beauty to behold.

However, this breed inherits a flaw from their Scottish fold parent – a genetic mutation that eventually ends in a painful death.

However, these cats that almost resemble a teddy bear make for great family pets.

So there you have it – 8 of the top breeds with snubbed noses.

One thing to remember if you are a pet parent of a snubbed-nose cat is to take good care of their nose.

You may want to check regularly to ensure the nose is not wet or full of dirt.

But with proper care and caution, your snubbed nose feline friend will be a great addition to your family for years to come.

What is a Roman Nose in Cats?