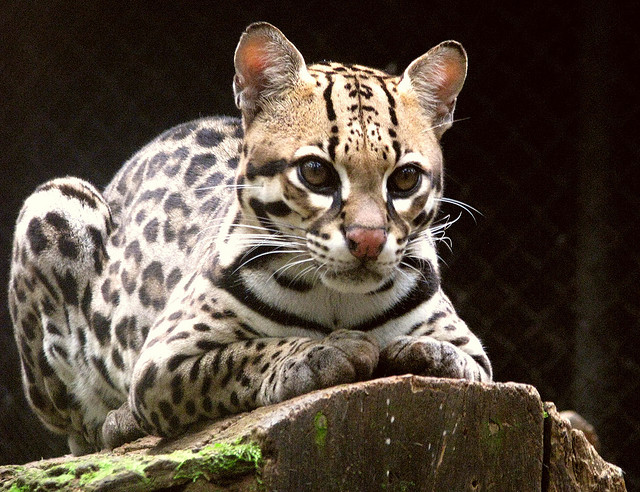 Cross-breeding of domestic and wild cats is nothing new. Breeders have experimented with all kinds of possibilities on this front.

Some of their efforts have borne good fruits and now we have several hybrid cats such as the Bengal cat, Chausie cat, Jungle Curl, Safari Cat, Cheetoh, and Highlander Cat just to mention a few.

Mating a wild cat and a domestic one is no easy task. Despite having the same anatomy, both species sometimes don’t have the right chromosome pairings. And those that do sometimes differ in size enough to make mating and gestation a challenge.

Does breeding an ocelot and a domestic cat fall in this category? Let’s investigate…

What Is An Ocelot?

Also known as the painted leopard or the dwarf leopard, the ocelot is a sleek member of the cat family with a striking dappled coat.

Its scientific name is Leopardus pardalis but it doesn’t belong to the leopard family.

It only has a coat that resembles the big cat but it is more of a small cat in its anatomy and behavior.

The ocelot is twice as big as the domestic feline and stands at about 28-35 inches on the shoulder. That’s about the height of the human knee.

Weight ranges between 24-35 pounds with females gearing more towards the left side of the scale and males towards the right side.

The cat mainly lives in rainforests in South America but it also resides in Texan brush lands.

Although rare, he may also come close to human inhabitants, especially villages among other settlements occupied by people.

Mating With Domestic Cats – Is It Possible?

While domestic and wild cats can breed, not all of them are compatible.

It all boils down to the DNA make-up of the parties involved, specifically the number of chromosomes in their nuclei.

Chromosomes determine how the offspring develops. Compatible animals essentially have similar gene makeup and the same number of chromosomes.

This means that when you mate both animals, two chromosomes will be left unpaired. Fortunately, the two cats can still have kittens.

It is the same scenario with a horse and a donkey. The former has 64 chromosomes while the latter has 62.

When an ocelot and a domestic cat breed, the offspring will acquire 19 chromosomes from mom and 18 from dad. The total chromosomes will equal 37.

So, yes, technically these two cats can be bred. The cells of the kitten will multiply normally.

Is The Offspring Fertile?

Mating a domestic cat and an ocelot is only half the battle. As explained, there is an additional chromosome that doesn’t get a partner. The extra horse chromosome just sits there and remains unmatched.

In theory, this mismatch doesn’t seem to affect much. However, chromosomes that don’t find their partners cause infertility issues for the young.

Back to our donkey/horse union above… mules are known to be infertile animals. The reason is that the unmatched chromosome makes it hard for the sperm or eggs to be produced.

Additionally, the chromosomes have slight differences in their genetic makeup. This means that even if an ocelot and a domestic cat can breed, they will produce kittens that cannot further reproduce.

Some will have a range of birth defects.

The issue of chromosomal mismatch is not the only challenge with breeding a domestic cat and an ocelot.

Size is also a major stumbling block. As mentioned earlier, a mature ocelot grows to a weight of 35 pounds and a height of 35 inches.

Oppositely, a domestic cat averages 15 pounds and 24 inches in weight and height respectively.

Of course, there are bigger cats but even these are way smaller compared to an ocelot.

Unless the ocelot becomes the mother in the equation, the size of the fetus will overwhelm the domestic cat.

Birthing complications are also bound to occur when a small kitty carries a fetus that’s too big for her.

Can ocelots breed with domestic cats? Sure they can. Both cats have a similar DNA makeup.

However, the unmatched number of chromosomes can present challenges for the offspring.

The size differences of the cats also make mating and breeding a tough battle.