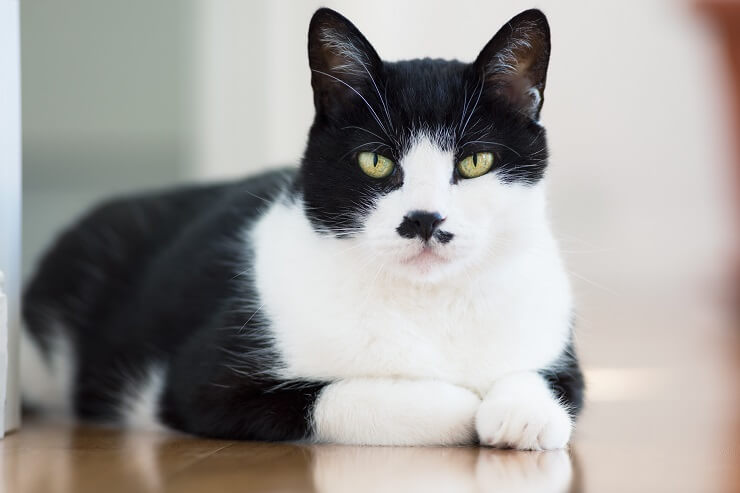 Those that have worked in adoption centers have probably witnessed it already. When potential cat owners come out to look for a pet to adopt, they are quickly drawn to other colors except for black or black and white cats.

They’d rather go for whites, blues, browns, or multicolored but not a tuxedo beast.

For this reason, these dual-colored kitties remain longer in adoption centers than other coat colors.

When other coat colors are picked fast, they can stay in the centers for up to 20 days longer. Some are never picked altogether.

To add salt to injury, the feral cat population is filled with them. Many are abandoned by their human parents and end up as strays.

Others are dumped by incompetent breeders when they stay too long before selling in breeding centers.

In the feral community, they multiply making up the majority of the stray cat population.

But really, why are black and white cats so unpopular?

1. Too Common A Color

The number one reason black and white beauties aren’t as popular as their counterparts is that their coat color is common.

Turns out that 70% of all cats in British shelters have either solid black or black and white coats.

The United States and other countries aren’t any better. Their adoption centers and cat communities abound with black and white-coated beauties.

You will often come across tuxedo cats, those with black bodies and white noses/chins (mask-wearers), black bodies with white chests, and other black and white felines.

It is human nature to want something unique. Otherwise, why would you often look out for the uncommon item at the furniture or the boutique? We all want to stand out and turn heads with our possessions.

Black and white cats are commonplace. So, to many people, there’s nothing special about their coats.

Owning one is like having a white car. Almost all your friends have one already.

This kind of thinking is certainly the reason black cats get picked last in adoption centers.

Black cats are also believed by many inhabitants of the world to be very superstitious.

Some deem them to be involved with all things evil while others say they bring good luck.

Sadly, some of these beliefs are heaped upon black and white cats as well. This is especially true for cats with lots of black on their bodies.

Those with an entirely black body with only a few parts being white are essentially seen as black cats with evil surrounding them.

Back in the 1100s, the Puritans believed that any black feline worked hand in hand with witches. They claimed that witches could transform into cats.

Throughout the Middle Ages, black cats were equally associated with black magic. They were seen as witches and wizards in disguise, animal-shaped satanic forces, or witches’ pets.

The belief was so bad that black cats were murdered alongside witches during the 17th-century Salem Witch Trials in Massachusetts.

On a positive note, black and black and white cats are a source of good fortune in certain parts of the world. In Japan, for instance, they are thought to bring love.

In the United Kingdom and Asia, you’d be lucky if you lived with a black cat.

In some parts of England, people say that a bride will enjoy a good marriage if she gets a black cat gift as part of her wedding gifts.

We could go on and on but the bottom line is that black and white cats are sometimes believed to carry a bad omen.

Sadly, some people hold on to these myths to this day. In turn, they have developed a bias towards these bold feline beasts.

Again, this is more of a myth than a fact. There have been reports claiming that black and white-colored cats have an attitude or most correctly – a ‘tuxitude’.

They can be sweet but sassy all at once according to the reports. They love affection but do it on their own terms.

Sometimes, they are aggressive for no reason at all. If this were true, it would explain why many of these beauties end up as strays.

Thankfully, there are studies claiming that the coat color has no relationship with the temperament of the kitty.

Are Black And White Cats Really That Bad?

Any cat lover knows that the coat color of a cat is not such a big deal. It all boils down to the temperament of the cat versus your needs.

Coat color is simply an issue of preference. All the myths surrounding these sweet little furry friends don’t stand true.

Ask a person that has owned a black and white cat before and they will tell you it is all lies.

Black and white cats (depending on the breed) are some of the cutest kitties in the cat world.

They are bold, fun, normal, and affectionate. By rejecting a cat based on its coat color, you might be rejecting a pet with an amazing character.

His character might be much better than a popular coat type such as ginger or a tortoiseshell.

Black and white cats are striking as they are sweet-tempered.

Sadly, many people view them as too common, having an attitude, or being downright evil.

If you land on the right kitty for your family (breed, temperament, and all), you will forever be grateful you chose the tuxedo!