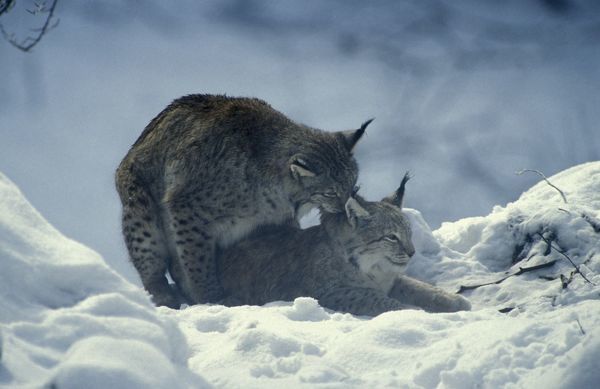 If stats by the ICUN are anything to go by, there are approximately 2.3-3.5 million bobcats in the world.

Many of them are found in North Africa, Mexico, U.S states, and Canadian provinces.

Because of being nocturnal and elusive, these cats are rarely seen. They prefer hiding out in forests, scrubland, and swamps. Nevertheless, they can find their way to residential areas.

As a cat enthusiast, you wonder if a bobcat and a domestic cat can mate and produce offspring.

After all, cats, no matter the size or breed are sexually compatible. When a queen is on heat, she goes out to look for any cat to mate with. Similarly, a tomcat can have sexual relations with any cat.

Knowing the size of bobcats in comparison to that of domestic cats, mating between the two is a challenging endeavor.

First of all, can it happen? Well, we have a succinct guide that answers the question.

We will also tell you whether the bobcat can mate with the famous lynx cat.

What Is The Bobcat?

Loosely referred to as a wildcat, the Bobcat is a big feline predator in the cat family.

He is about two times larger than the average cat. The average size is 8-33 pounds while height ranges 25-42 inches excluding the tail.

In comparison, a domestic cat typically stands anywhere from 15-20 inches and weighs 5-10 pounds.

Others like the Maine Coon, Ragdoll, and Norwegian Forest Cat can reach 15 pounds but they rarely go past 20 pounds.

The Bobcat has long legs and large paws. His ears are tufted much like those of his larger relative, the lynx.

Bobcats also have cut or bobbed tails from where their names come from. The coat is predominantly brown (pale or greyish) with dark bands on the tails and front legs.

The body also has stripes. With soft spotted fur, the cats are notoriously hunted for their coats. It doesn’t happen in all regions but some cruel people kill them for it.

Bobcats are solitary animals. They neither live nor hunt in packs.

Females raise their young in hidden spots away from any cat. Males are fiercely territorial. They typically do not entertain any cat in their territories that span up to 25 miles.

Through urine spraying and other secretions, the males keep other cats away from their territories.

Can Bobcats Mate With Domestic Cats?

This question doesn’t have a definite answer. It sparks a lot of debates between experts and the average John Doe.

There are reports of Bobcat mating with the domestic cat. Quora is filled with cat owners claiming that their cat got pregnant after mating with a bobcat.

Ronald Erickson is one such cat owner that experienced a female black cat giving birth to a kitten with bobcat genes.

He was only a teenager when the cat sneaked out to mate. A few months later, he, together with his folks discovered that she was pregnant.

He had the physical features and the temperament of the wild cat. When they went to the vet, their suspicions were confirmed.

This is one story proving that bobcats and domestic cats can mate.

In 2014, USA Today published an article about a hybrid cat that had supposedly run away from home.

The cat named Rocky was a cross between a bobcat and a Maine Coon.

He’d run to the nearby woods to hide and took the persistence of his owner Fine to lure him out of the woods.

The Stafford Township Animal control insisted that the cat wasn’t allowed back home if he was 100% bobcat.

These wild cats have sharp claws and teeth. They can easily hurt people. Their behavior is not great around residential areas as well. They simply belong to the wild.

One of the common cat breeds, Pixie-bob is also believed to be a cross between a bobcat and a barn cat. Granted, there’s no scientific evidence to support this claim but the breed has striking physical and behavioral characteristics to bobcats.

Pixie-bobs are muscular, lean, and tall. Their coats bear the same colors and patterns as bobcats.

Further, one man, Stanley Young apparently mated a bobcat and a domestic cat in 1949 and got a kitten from the endeavor.

He published the study in 1958 and from it claimed that people saw the offspring around South Dakota.

We could go on and on but the truth is that the evidence pointing to mating possibilities between bobcats and domestic cats is stronger than the opposite.

We strongly believe that both cat species can mate with each other.

Can A Bobcat And Lynx Mate?

The Lynx cat and bobcat are both wild cats. Their sizes are in close range.

The former weighs 22-44 pounds and stands at a height of 32-40 inches. It is therefore slightly larger than the bobcat.

Like his counterpart, the Lynx is solitary and hangs in remote forests of Europe, North Africa, and Asia.

He has large furry soles that act as snowshoes. This feature is lacking in bobcats.

Bobcats and lynx cats can mate with each other.

Take a look at this article published by CBS News about sightings of both felines breeding with each other. This took place in Brunswick and Nova Scotia, Canada.

Not only were the cats mating back then but they were producing fertile offspring. This action flabbergasted experts who have always known that such unions give rise to sterile kittens much like breeding horses and donkeys.

Since bobcats and Lynx pretty much fall in the same family, mating is risk-free and highly likely. The chance of the male hurting the female is very low.

Most importantly, the male is big enough to climb the female. Plus, both respond to each other sexually.

Worried that your sweet little kitty will mate with a bobcat? You should be.

Mating will hurt your cat in more ways than one.

If you don’t want such a surprise, it would be prudent to have your cat altered as soon as possible.

Can Ocelots Breed With Domestic Cats?