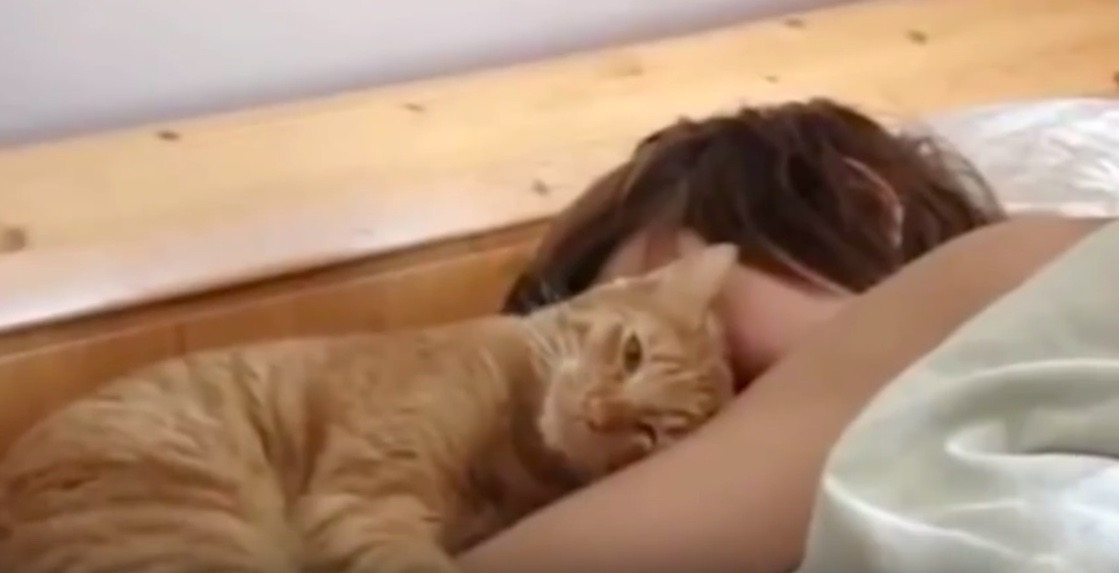 The subject of feline sexuality is one with a lot of mystery surrounding it.

As a pet owner, you have probably witnessed the most fascinating, concerning, and bizarre stunts from your beloved pet. This is especially true if she is not fixed.

When she is on heat, some of her actions will drive you bonkers. From making weird noises to humping on your arm to refusing to eat, a cat on heat is hard to figure out.

Then there’s the issue of the sexual relationship between cats and humans.

Everyone knows that felines don’t really have feelings towards their human owners.

However, these adorable furballs can, at times, act in a manner suggesting otherwise.

Perhaps your kitty shows signs of being turned on when you pet them. Or have a favorite person that they mount on repeatedly.

If you are such a victim, it can be easy for you to wonder if your pet gets aroused by you.

Does it mean that cats can get turned on by humans?

We will delve deep into this topic in this article.

Are Cats Sexually Attracted To Humans?

First things first, we have to answer the question of whether cats feel any sexual connection towards human beings.

The fact is that kitties feel absolutely no sexual feelings towards their human owners and vice versa.

Both creatures are wired differently and respond to sex in totally different ways.

Humans have certain things that turn them on while cats rely on hormones to reproduce.

So ideally, when your kitty reaches puberty, she will begin to enter estrus or heat. Here, her body will produce sexual hormones and a distinct odor that tells male cats she’s ready to mate.

In this state, the kitty will give you signals of wanting to mate.

She may crave more affection, rub her body on you more, hump on stuff (or you), and just act funny.

If you don’t know feline sexual behavior, you may think that your kitty is attracted to you.

When she asks for extra attention and mounts you non-stop, your mind will imagine that she’s turned on by you.

This rings true if the cat is focused on you or one member of the house alone.

However, the truth of the matter is that your kitty needs to mate with her kind and since she trusts you, she will dump all her feelings on you.

Learn more here: Can Cats Be Sexually Attracted To Humans?

Why Do Cats Display Sexual Behavior Towards Humans?

Different cats act as if they are turned on towards humans for different reasons. Let’s go over a few of them down below.

1. They Want To Mate

The most probable reason that your kitty is following your everywhere and mounting on you is because she wants to mate with a male cat.

This, of course, happens when she’s on heat. Her hormones are raging and all she wants to do is mate to feel better.

She’s designed to act this way to ensure the continuation of her species.

If there are no toms around, she will try all means to get out.

If that, too, is not an option, expect her to act weird around you.

If she likes you a lot, humping is almost always guaranteed.

All her actions are screaming that she just wants some action with a male cat.

If you are not ready to breed, spay the cat and you will have no problem with this in the future.

Related Post: Do Female Cats In Heat Get Attracted To Male Humans?

2. They Have Created A Habit Out Of It

It is worth noting that despite neutering, some male cats will still have some level of testosterone in their bodies.

This is often the case for males that are neutered as experienced adults.

After mounting females for a while, they get used to the habit that they will keep it up from time to time.

If you have such a cat at home, their mounting doesn’t really mean that they want to mate.

Rather, they do it out of habit. They will hump on you and other objects around the house at random.

The behavior can be triggered by something such as new cats in the house, strangers, and more.

Related Post: How Long Does a Male Cat Stay in Heat?

A stressed cat can also show certain behaviors that point towards getting turned on.

If you know felines very well, you are probably aware that they are addicted to routines.

They thrive best when things stay the same day in day out. So when their litter box is moved, a new cat is introduced to the household, or the family moves house, they get anxious and stressed.

Stress in cats affects their physical health but it can also lead to a plethora of behavioral problems. These range from aggression to litter box avoidance to withdrawal and ‘flirting’.

Out of the blue, your normal kitty will start to hump on you and when you refuse his advances, he will leave bite marks on you.

Don’t be quick to judge him—he’s trying to let you know that he’s stressed.

Cats are some of the most intelligent creatures known to man.

They may not have the strength to fight alongside servicemen or sniff drugs like dogs but they are pretty smart.

Most of the things they do on a daily basis are to ensure a comfortable life for them.

When your kitty shows extra affection, her end goal may be to get some food on her plate.

Sometimes she acts like she’s turned on just to get some affection from you. Or a good place to lay her head, and so on.

Why Is My Cat More Affectionate When I’m On My Periods?

5. They Want Some Attention

Last but not least, cats sometimes display sexual behavior towards you because they are desperate for some attention from you.

Perhaps rubbing her body against your legs, sitting on your lap, or following you around doesn’t get your attention.

As a witty creature, she will try to mount on your legs or arms when sitting to just get some love.

If you’ve been on a trip, don’t freak out when the cat acts all turned on in your presence.

She just missed your company and acts all crazy to communicate her feelings.

In this case, don’t dismiss her. Instead, pick her up and play with her. She will soon snap out of it.

Why Does My Cat Come to Me When I Cry?

Why Does My Cat Come to Me When I Sing? (6 Potential Reasons)

Cats and humans have a special bond but there’s nothing sexual about it. It’s purely social and nothing more.

If yours act a bit weird in your presence, it could be because of any of the reasons above.

Simply find ways to engage the cat without encouraging the behavior.

Play with her until you tire her out.

Offer some needed attention. If you suspect she’s not well, go to the vet.

Essential Oils for Cats in Heat