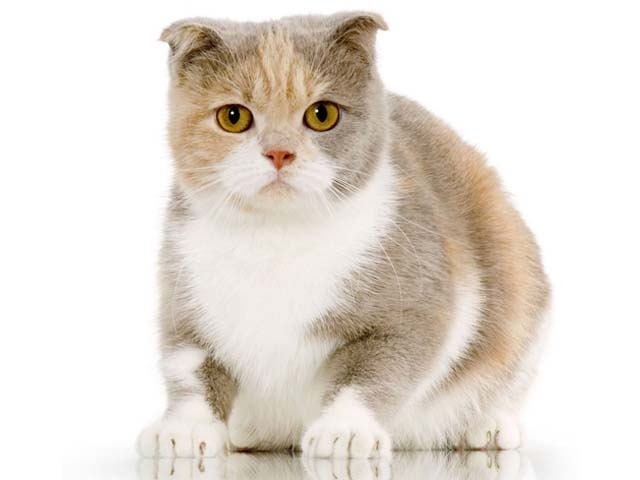 If you are into cats, then you know that they come in all shapes and sizes.

Some are muscular, some are slender, some tall, etc.

But perhaps the most fascinating physical characteristic in cats is their face.

If you want a cat that has a cute face, you won’t do better than round-faced breeds.

A cat that has a round face has an alluring look that will make you always want to pinch them.

Scottish fold cats arguably have the roundest face of all cat breeds.

Not only do they have a rounded face but folded-over ears as well which make the face appear even rounder than it is.

They also have short necks and large eyes which help to draw attention to the round face.

They have dense and short fur which makes grooming quite easy—just brush them once a week to remove loose hair.

These cats are affectionate and easy-going. They love relaxing on the couch next to their owners because they love attention like most cats.

They also love the company of other felines and pets to play with, so you may want to consider that when getting one.

The British shorthair has a distinctive broad and round face.

This is one of the oldest cat breeds known to man and it is still one of the most pedigreed breeds.

These cats are loved for their dense coats that come in various patterns and colors, but the blue-gray coat is the most popular.

They also have broad chests, thick legs, and chubby cheeks which add to the roundness of the face.

A weekly brush should be sufficient to rid them of dirt and loose hair so they are very easy to maintain.

These cats are ambiverts, so you will need to give them lots of attention—but who wouldn’t want to spend quality time with a cat that has such a pinchable face?

Chartreux is a round-faced French breed that is popular for its water-repellant fur and hunting abilities.

It is believed that these cats were first domesticated by monks to keep rodents at bay.

But today, they are popular house pets because they also make for awesome companions.

These cats are not very vocal and they are known to keep their thoughts to themselves.

Occasionally, they might open their mouths to meow but no sound will come out.

When they do vocalize, it will be a small trill or chirp that will not disturb your peace.

These cats are natural hunters and this could be the reason why they are adapted to staying quiet.

Because of their hunting prowess, they will enjoy toys that move and you can have lots of fun with them around the house.

The exotic shorthair is a short-hair version of the Persian breed.

For this reason, the exotic shorthair has many similarities to the Persian including a flat and rounded face, a flat nose, and conformation.

These cats are curious but quiet and they are a lot more active than the Persians.

Their short-hair coat is a great plus you won’t have to deal with too much shedding when you welcome one into your home.

Exotic shorthairs come in all kinds of colors and they can have blue-green, blue, or copper eyes.

These cats make for great house pets not only because of their temperament but also because they love playing.

Exotics are loyal breeds that will get attached to their owners very easily.

It is a short-haired breed with a sleek black coat that makes it resemble a black panther.

If you see a round-faced cat that has a black coat, there is a good chance it’s a Bombay.

Bombay cats are endearing, lighthearted, and playful. They love playing fetch or cuddling with the family members on the couch.

Their Burmese heritage makes them very clever as well as people-oriented and you will enjoy spending time with them.

However, Bombays are strong-willed and vocal cats who will stare down and vocalize their wants until you respond to them.

These cats will always crave your attention and they will come up with clever ways of getting it. For instance, as soon as you sit down, the Bombay cat will join you moments later.

As the name suggests, the Maine coon is native to Maine State in North America. This is actually the official state cat of Maine.

Maine coons are natural hunters which were domesticated to help deal with rodents in homes.

This cat has a lot of resemblance to the Norwegian Forest Cat and the Siberian and it has been postulated that they may be related.

Even though it is a large cat with strong hunting instincts, it is also very gentle and caring and has been nicknamed, the gentle giant.

This breed comes in a variety of colors. In fact, only chocolate and lilac are disallowed for pedigree.

This cat is very intelligent and playful and is often said to have “dog-like” attributes.

The Maine Coon is susceptible to feline hypertrophic cardiomyopathy and hip dysplasia.

However, breeders use advanced screening tools to reduce the chances of contracting these diseases.

As the name suggests, the Turkish Angora originated from the Ankara region of present-day Turkey.

This is one of the oldest round-faced cat breeds from the region and it is believed to have been around as early as the 17th century.

Angora cats have small round heads that are sharply contrasted with large and wide-set ears.

Turkish Angora Cats were used so much for breeding Persian breeds that they were almost driven to extinction.

This is one of the reasons why the breed is quite rare today.

The angora has a long and tender coat that can be in a variety of colors.

Most cats have a white coat but it’s also possible for cats to have brown, red, black, grey, tabby, bi-color, or tortoiseshell variations.

The Bengal cat breed was made from hybrid breeds like the Asian leopard cat and the Egyptian Mau.

Bengals have the resemblance of jungle cats due to their Asian leopard cat ancestry and they also have a distinctive round face.

However, they are not wild at heart and make for awesome house pets.

They have very soft fur that is comparable to that of a bunny.

They can have green, orange, yellow or brown eyes.

Their coats are usually decorated in the rosette markings but it is also possible to get one that has a marbled or spotted coat.

The American shorthair is a breed that is believed to have descended from European breeds.

This is a well-built cat that is strong, balanced, and symmetrical.

The cat has a black mark extending outward from both eyes, which makes its round face even more symmetrical.

These cats are neither too dull nor too playful. Yes, they love some activity but again not too much of it.

American shorthairs are quite adaptable, sociable, and easy to be around.

Their round faces and over 80 different color combinations make them such a delight.

If you vaccinate them every year and feed them well, they will live for up to 15 years

The California spangled is another round-faced breed that has a coat with spots that resemble those on a leopard and is loosely referred to as the house leopard.

This breed was introduced as a way of communicating the importance of conserving the leopard.

California spangled cats are very rare and they risk extinction.

Even though they have the look of a wild cat (almost like a small leopard), these cats are very domestic and easy around kids and other family members

The Siberian breed is centuries old and is, therefore, one of the oldest round-faced cat breeds from Russia.

Siberians are considered to be landrace but they have also been developed as a formal breed to reflect the standards that were set in the 1980s.

These cats are well adapted to the icy forests of Siberia as you can see from their water-resistant and triple-layered coats.

They also have a muscular body that is quite heavy for their size.

Because of their thick coats, these cats do a lot of shedding and would therefore cause a lot of fur problems in your house.

These cats molt twice a year which is an adaptation to prepare for the harsh winters of Siberia.

Ironically, these cats are hypoallergenic because they do not secure the chemical associated with allergies.

The Sable Burmese hails from Burma on the Thai-Burma border.

They have well-built and round faces with golden eyes that glow in the dark.

Burmese cats are small breeds that weigh around 9-13 pounds but they are still well built.

They have a short and glossy coat that has a satin-like finish.

This is a people-oriented breed and is, therefore, an awesome house pet.

We hope the list has given you an idea of the breeds to consider when looking for round-faced felines.

Round-faced cat breeds can be such a beauty.

Their round faces accentuate their other features, especially if they have bright eyes or some other striking attribute.