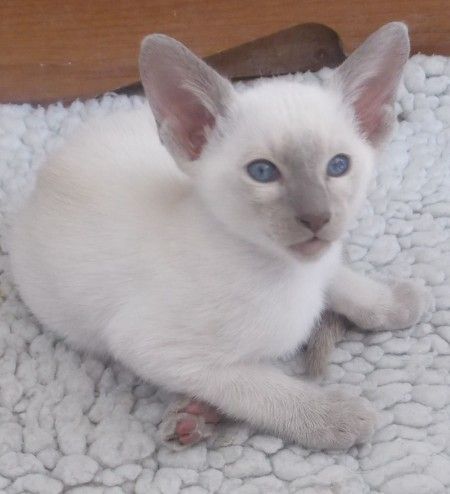 Gender, breed, color, shape, size….these are just some of the many characteristics that differentiate cats.

But an often overlooked and yet interesting difference is the size of the head.

Some breeds have small heads even though their bodies are big. Here are some of them.

The Devon Rex is one of the cat breeds that have small heads with big bodies.

Even though they have distinctively large eyes on their somewhat wide heads, the head size has nothing on the size of the cat.

Devons have long and sturdy legs that are built for leaps and these long legs make them appear huge.

They also have unusually large toes. These among many other distinct traits have led to this breed being described as a breed between a dog, a monkey, and a cat.

A Devon Rex cat can be trained to play fetch and follow some basic tricks that are typically done by canines.

The ragdoll is a cat breed that has a large and muscular form but a rather small head.

These breeds were developed in the 1960s by Ann Baker.

Ragdolls are large and powerful cats that can be identified by a V-shaped marking on their foreheads.

Other physical attributes include thick limbs, a thick but soft coat, and a long tail.

Ragdolls have a broadhead that has a flat top but the size of the head fades in comparison to the sturdy body and the thick coat.

A fully-grown ragdoll female can weigh 8-15 pounds while males could weigh 12-20 pounds.

As the name suggests, this cat breed has a naturally occurring bobbed tail.

The cat is relatively large with a thick neck that supports a rather small head.

American bobtails can be both long-haired and short-haired but whichever the case, they are sturdy breeds.

These cats have a shaggy coat as opposed to the dense and fluffy ones that are common in other cats.

The coats are typically wild and tabby although some exceptions exist depending on their parents.

American bobtails are loving and devoted companions and they not only bond easily with family members but also adapt to new environments quite easily, which makes them awesome house pets.

Persian cats are known for their short muzzle and round faces.

The tiny head coupled with the beautiful long hair and pretty face makes it the glamour kitty of the cat world.

There are two main types of Persian cats: traditional and show Persians.

Show Persians have round heads that are enhanced with small ears, thick ruff, a flat nose, and distinctive large round copper eyes.

Traditional Persians have normal-length noses which give them sweet expressions. No wonder they are often referred to as doll face.

Persians love to cuddle and are the perfect lap cat. These cats love serene environments although they can also adapt to a large and noisy family.

The American curl gets its name from its unique ears which curl from its small and round head towards the back of its skull.

Interestingly, their kittens are born with straight ears which then begin to curl after around 48 hours.

Their ears are very delicate and should be handled with care to avoid damaging them.

American Curls reach maturity after 2-3 years and they can weigh anything from 5-8 pounds for females and 7-10 pounds for males.

Their small heads make their necks seem almost swallowed in the body.

The most distinctive trait in Sphynx cats is their hairlessness.

Lack of hair in cats is a genetic mutation and this breed was therefore developed through selective breeding.

In addition to their hairless skin, these cats also have distinctive small heads.

Compared to the size of the cat, the head would look unproportional but the huge ears make the head look somewhat normal.

Sphynx are extroverts but they are very intelligent and have high energy levels.

These cats are almost dog-like and will greet their owners as soon as they enter the door.

They can also be very friendly to strangers.

The Cornish Rex is not only known for its small head that carries large ears but also because they only have down hair.

Typically, cats have guard hairs (the outer fur), awn hair (a middle layer of fur), and down hair (undercoat).

This breed doesn’t have guard or awn hair—only the down hair.

Down hair is usually very fine and extends to a maximum of 1cm.

As a consequence, these cats can lose hair very easily and even go bald.

The Cornish Rex is an affectionate and playful cat and would make for a great pet especially with kids.

The Siamese cat hails from Asia and it is believed to have descended from the Wichianmat Landrace, a cat that came from Thailand.

This cat has a relatively large body, a long tail but a small triangular head that makes its large ears appear misplaced.

This cat breed has blue eyes which when coupled with other qualities like its lean build make it such a beauty.

They also have a short coat that doesn’t shed a lot which is arguably one of the reasons for this breed’s popularity.

These cats are social, outgoing, and affectionate.

If you are wondering why your cat has a small head and a huge body, this listicle should help you rest easy.

The size of the head has nothing to do with nutrition as it is all genetics.

Your cat is just fine—and yes, there are many others like him out there.